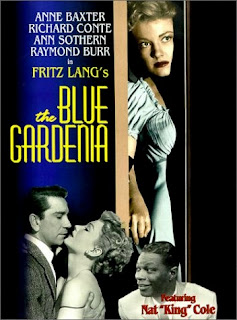 -“If you want your picture in the paper, you’ll have to go out and kill somebody first.”

Released the same year as the legendary The Big Heat, it is not surprising that The Blue Gardenia remains an afterthought in the filmography of Fritz Lang. And deservedly so, as it is overshadowed by other noir gems like the aforementioned The Big Heat, Clash By Night and more (but we’ll get to those in due time…). To most people, this may indeed be the most minor of Fritz Lang films, and they may be shocked to see it ranked above more-acclaimed efforts like The Woman in the Window. I’ve always felt it to be underrated, although far from being a flawless noir.

Knowing the principals involved, the thing that has always struck me about The Blue Gardenia is that everyone had previously done better work, or would do so shortly thereafter. As discussed in the opening paragraph, Lang had already made masterpieces on two continents and by this point was approaching the twilight of his career. Anne Baxter's career-defining performance in All About Eve was behind her and she would never approach those heights. Richard Conte was a noir veteran and while his career was not declining, his banner performances would come elsewhere. If Raymond Burr is not immediately recognized as Perry Mason, then it is likely that he is remembered as Thorwald the murderer in Hitchcock’s Rear Window. Nicholas Musuraca previously served as director of photography on legendary noirs like Out of the Past, The Spiral Staircase and others. Even Vera Caspary, author of the source story, achieved greater heights with Laura. With this outlook, then The Blue Gardenia could justifiably be relegated to second-tier status. But I think such a designation speaks more to the level of accomplishments of everyone involved than to the inferiority of the film. 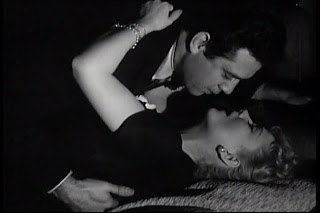 The familiar theme of one misguided decision snowballing into ever-expanding problems is the key to this story. After receiving a letter from her fiancé in Korea that ends their relationship, Norah Larkin (Anne Baxter) feels depressed. When someone calls for a blind date with her roommate, the lonely Norah instead accepts the invitation and meets the dominant Harry Prebble (Raymond Burr) at The Blue Gardenia nightclub. Drinking her sorrows away, Norah gets completely hammered and is easily lured back to Prebble’s apartment. When Harry begins making unwelcome advances, Norah strikes him over the head and then blacks out. The next morning, out of the apartment, she shockingly learns that Harry has been found dead. When energetic reporter Casey Mayo (Richard Conte) takes up the case, publishing a letter calling for the murderers to come forward, Norah makes contact with him. Offering to use the newspaper to protect her, Casey gets Norah to open up to him. Eventually, she is arrested anyway and Casey then begins to fight to prove her innocence. 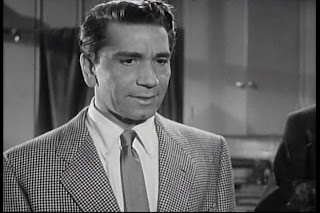 Fritz Lang would later dismiss the film as his simply fulfilling a contract, which may be how he approached it. The results are a bit more impressive than that, although the limitations of the screenplay and story mean that no matter how much effort Lang put forth, the movie would only have gone so far. Things are not as suspenseful as the characters seem to believe and the conclusion could have been improved by not being so abrupt. This seems to be a common complaint among reviews that I have read of the film – that for whatever reason, be it money, time or Lang’s effort, the movie is wrapped far too quickly. It’s a criticism I agree with, but not to the point that it invalidates the entire effort. I like the overall atmosphere created in the film, which is different from typical noirs. In fact, an argument can be made that this only marginally qualifies as a film noir. It is a nice snapshot of a time and era, utilizing simple things like the interplay between roommates who live together and long for the return of boyfriends from Korea. We get to see the nightclub environment and hear the melodies of songsters like Nat King Cole. It might not be the dark atmosphere most are accustomed to in film noir, but it is interesting nonetheless. Plus, any excuse to watch Richard Conte in the 40s or 50s should always be taken advantage of!

Conventional wisdom says it's a bit of a stretch to slot The Blue Gardenia higher than such classics as The Woman in the Window or Act of Violence. But that's the beauty of being the one making all the picks - I can go with pure personal preference!
Posted by Dave at 12:05 AM