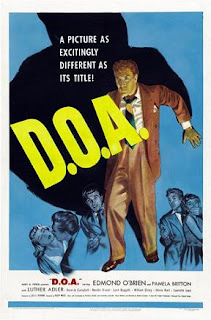 Is there a more legendary opening to a film than Frank Bigelow stumbling into a police station and matter-of-factly declaring that he is there report a murder – his own! The impact of this opening scene has likely been blunted over time, especially as it is a scene that has been discussed and lauded repeatedly. Even so, it still remains a wonderfully inventive way to begin a film that, after a leisurely beginning, starts moving at breakneck speed toward the finish. However inventive it seems, though, the idea is not completely original. The premise of a man who is dying from unnatural causes scrambling to discover the cause of what is killing him actually comes from a 1931 film directed by another master of noir – Robert Siodmak. That film was called Der Mann, Der Seinen Morder Sucht, which Siodmak directed in his native Germany nearly a decade before his move to Hollywood. Not having seen the German film, I can’t really compare the two, but can at least acknowledge that there are few directors who would be better to borrow from than Robert Siodmak! 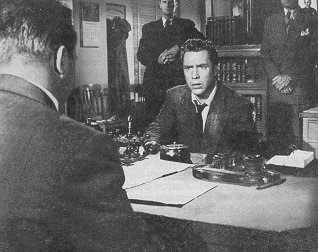 In this case, our dying man is played wonderfully by leading noir protagonist Edmond O’Brien. O’Brien is Frank Bigelow, a small town accountant in California who travels to San Francisco for a vacation meant to clear his mind. Frank is torn on whether to continue life as usual or commit to a relationship with his girlfriend and secretary Paula Gibson (Pamela Britton). While at his hotel, Frank meets up with a group of sales conventioneers and goes out on the town for drinks. When he wakes up the next morning feeling miserable, Frank decides that a quick trip to the doctor is in order. The news he receives from the physician is staggering – he has been drugged with a lethal dose of iridium that will kill him in only a matter of days. While authorities come to transport Frank to a hospital for care, he escapes and begins a search for whoever poisoned him. Frank begins following the trail of a shipment of iridium, including a bill of sale that he had notarized months before. After learning that the president of this company had also recently died of iridium poisoning, Frank realizes that he has unwittingly been swept up in a conspiracy involving the Los Angeles-based company and black market elements. 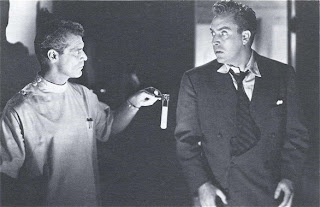 This is a definite SPOILER, so if you haven’t seen the movie just ignore this paragraph. What always strikes me is how grim the conclusion is. Let’s be honest, there are not an abundance of films of the era that completely telegraph and then follow through on the death of the hero. That is precisely what Rudolph Maté and company do. When the film opens with Bigelow in the police station, declaring that he has been murdered, you know that some great misery has befallen him. But, at least in my case, you expect that there is going to be some sort of relief that will eventually emerge and save him from his bleak fate. It never comes. Frank survives just long enough to recount his story and then slip off to his expected death. Instead of some great plot twist to save Frank, it is even more shocking that he is allowed to die as he said he would at the start of the film.

Rudolph Maté being a celebrated cinematographer himself, and working with another outstanding director of photography in Ernest Laszlo, is a key reason why D.O.A. remains one of the finest B-movies ever released. The picture quality may scream of poor, but the effects that Maté and Laszlo are able to achieve on a shoestring budget are beyond impressive. The key to success is visually conveying the nightmare that Frank Bigelow’s life has quickly become. This means keeping everything fast-paced, and doing simple yet effective things like swishing the camera to following a sprinting Frank down a street. The blurring out of everything but the running Frank may now be seen as cheesy or too pat, but it’s flat-out successful.

Edmond O’Brien’s performance is also a key, as he is a noir actor who is very adept at portraying the common man. What shines through most in his performance is the pure helplessness of it all. One innocuous decision – a decision that would have been made by any normal man in his position – has landed him in this unthinkable predicament. And that is what sticks with me most from the film: how hopeless everything feels. Can a greater compliment be paid to a film noir?
Posted by Dave at 12:05 AM