- "God is just, but men sometimes are unjust."

In beginning this Year’s Best Countdown, I began the process essentially by making a yearly outline of films that I thought were worthy of consideration for the top film of each individual year. For many years, this meant that there were a number of films that were at least in contention, and in most instances this meant wading through a number of great films to finally decide upon one. 1935 was a bit different – whether due to oversights in my own viewing or just an unfortunate coincidence, I realized that I haven’t seen nearly as many movies released in 1935 as other years of the decade. Due primarily to this lack of familiarity with a variety of films of this year, I looked toward 1935 as something of a down year in terms of depth of great films. But this choice is an example of how this countdown is serving as a great education for me, as I had never seen Richard Boleslawski’s version of Les misérables until I began sifting through the most highly regarded films of 1935.

Now in the interest of full disclosure, and at the risk of revealing myself to be an uncultured fool, I have to admit to having absolutely no experience in regard to Les misérables and its various incarnations. I have never read Victor Hugo’s novel. I have never seen it performed on the stage. And, even more significantly for this countdown, I have not seen the more acclaimed 1934 adaptation directed by Raymond Bernard. From what I can gather just based upon reading about this version, fans of the novel favor Bernard’s film and consider it to be the most faithful rendering of the story ever adapted for the screen. I’ve also taken note of the fact that Bernard’s version placed at #13 on the Wonders in the Dark Best Films of the 1930s Poll, while this version released a year later did not make the cut. While lists are not the final word on a film’s greatness, the WitD polls have been very accurate reflections of how well thought of a film is among enthusiasts.

With all that being said, I still really liked this version. I think the fact that I enjoyed it so much says a lot about both Hugo’s original story and Boleslawksi’s rendering of it. That the same story can be adapted in different fashion by different directors – not to mention in distinct art forms between film and theatre – and be appreciated in each version is testament to what a timeless tale Hugo crafted. It is also notable that Boleslawski’s adaptation is able to stand completely on its own and be so impressive to a viewer like myself. Having no preconceived ideas based upon the novel or play, the film had to make it for me solely on its own strengths. And it does. 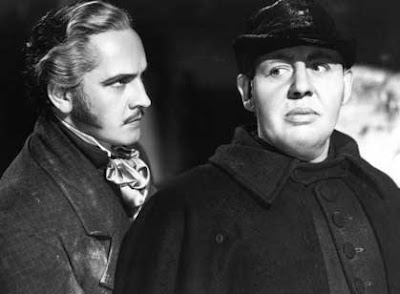 With all of these admissions I just made, my opinion concerning the movie’s strengths may not be as enlightened as that of a more experienced viewer, but it seems obvious to me that the success of an adaptation of Hugo’s tale is in large part dependent upon the power of the two lead performances. Little more could be asked from Fredric March and Charles Laughton in filling these roles. Overcoming my handicap of picturing The Best Years of Our Lives’ Al Stephenson whenever I think of Fredric March, I have come to realize how truly talented an actor he was. In this film he makes Jean Valjean a multi-layered character in being able to make both sides of his personality equally believable. Valjean is justifiably bitter when he emerges from his ten year prison sentence, having been hardened to the point of seeing no good in other people. In these instances, the haggard and bearded March provides the right amount of nastiness to Valjean, resulting in a man that is at the same time pitiful and frightening. When Valjean later manages to create a new life for himself as a successful businessman, March looks and acts in a completely different manner. The clean-cut Madeleine (Valjean’s new identity) is sophisticated, charming, and genuinely caring. Neither side of the personality seems at all forced, highlighting the transformation that Valjean makes from jaded ex-con to leading citizen.

Charles Laughton’s performance is, in my opinion, the lesser of the two leads and is far from being his personal greatest role. But he does create an interesting foil to Valjean. As Inspector Javert, he produces a unique form of coldness, as Javert almost seems to be unaware of how callous he truly is. Until the thrilling conclusion, he is following a rigid belief in the rule of law and can be undeterred from seeing that the law is upheld.

There is also more to admire than just the lead performances. The cinematography is handled by Gregg Toland, of Citizen Kane fame, and looks outstanding. Until doing a little research for this review, I didn’t realize the list of classic films in which Toland was the cinematographer. Wuthering Heights, The Grapes of Wrath, The Westerner, Citizen Kane, The Best Years of Our Lives – these are just a few of his achievements. In this film, he is able to create varying atmospheres based upon the situation Jean finds himself in. When he emerges from prison and is wandering the streets, Toland uses very dark lighting and has shadows leaping across the screen. In many instances, such as Jean’s entering into the parish of Bishop Myriel (Cedric Hardwicke), the photography is downright eerie and could rival anything in a horror movie of the era. The same can be said for the cruel tone set in the prison scenes, which are quite brutal. But in happier situations, such as when Valjean is with his adopted daughter Cosette (Rochelle Hudson), the lighting is much less foreboding.

The other striking feature, and I am not sure what exactly to make of it, is how often Boleslawski framed shots that juxtaposed Jean with images and statues of the crucifixion. In fact, if one wanted to take religious undertones to an even greater length, one can simply look at the appearance of Jean when he leaves prison. It very much resembles the traditional image of the bearded, long-haired Christ.

Having been so thoroughly drawn into this story, I have now become anxious to see Raymond Bernard’s adaptation. From what I can gather from online sources, it appears that the increased length of that version allows Bernard to more fully develop characters and certain subplots of Hugo’s original story. I’m incredibly intrigued by that prospect and if it exceeds my enjoyment of this 1935 version then it truly must be a great film. In closing, I'm not even sure that this is the film that I would give the highest rating to for 1935, but ultimately that's unimportant. What I do know that it is my personal favorite.

Other Contenders for 1935: As I said, I’m not sure that I have seen nearly the number of films for 1935 that I need to in order to pick a best of the year. With that being said, I worked with what I had and feel confident that I have highlighted a commendable film. The main competition for me in this year came from James Whale’s Bride of Frankenstein. I felt that Whale’s first installment in the Frankenstein series was good, but that the sequel exceeded it. I also have always liked Hitchcock’s British thriller The 39 Steps, but not quite as much as many others. I think it’s entertaining, but really not up to the standard of his later classics. A film that I have always had a personal affection for – and which I do not know if others consider it to be a “great” or even “very good” film – is Michael Curtiz’s Captain Blood. It’s just such fun and a great adventure film. The more Curtiz films I watch, the more my appreciation of him increases.
Posted by Dave at 8:28 PM