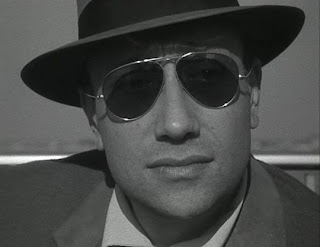 - "I believe that you must be madly in love with cinema to create films."

I love the title of the Ginette Vincendeau’s biography of Jean-Pierre Melville – Jean-Pierre Melville: An American in Paris. While such an epithet might be a little too constraining in assessing the work of such a great director, I bring it up here because it is one of the qualities that first attracted me to Melville. When I first started to branch out and familiarize myself with films from around the world, Melville was one of the first directors that I turned to. Everything I read about and from the man fascinated me. His obsession and encyclopedic knowledge of classic Hollywood cinema intrigued me, as he was known to worship so many of the same directors, films, and actors that I had grown to love. It wasn’t just cinema either, but his complete love of American culture fascinated me. And in the first films that I watched, I saw the fingerprints of this love of all things American. I was instantly amazed at how he adapted conventions from classic Hollywood noir, gangster films, and crime drama to the streets of his native France – and almost had to pinch myself when I realized that not only did he adapt them, he improved upon them.

But to look at him solely as an American in Paris overlooks how important his French heritage, and the era in which he came of age, is in much of his best work. Melville may be regarded as the greatest director of “gangster pictures,” but his work centered on the French Resistance is just as impressive. Perhaps the two facets of Melville’s work shouldn’t really be separated, though, as he infused a noirish element into these war films, making Army of Shadows an experience unique from any other similar movies of the era.

I began taking stock of all of the Melville that I had seen shortly before this series began, when Doniphon began his wonderful series on Melville at The Long Voyage Home. I encourage everyone to check out Doniphon’s insights into the cinema of Melville, as he provides far more astute observations than you will find in this piece. What I realized in reading Doniphon’s work, and in gathering my thoughts for my own entry here, is why Melville’s work is so durable for me. By durable, I mean the way that it simply stays with you – his are not movies that are viewed for two hours and then cast aside as you move on to the next film. A Melville stays with you, forcing you to ruminate on it, begging you to return to it. Why do his films have such an effect? I attribute it to the unmatched ability of the director to create enveloping moods. There are certainly technically brilliant elements on display in many of his films – the great cinematography in Le Doulos immediately comes to mind, as does the wonderful use of drab colors in Le Samourai – but none of those individual technical achievements are as memorable as the moods and tones Melville creates. Just thinking about Le Samourai makes me think of steamy Parisian streets and a jazz club. Le Doulos instantly has me picturing fedoras and gangsters. Le Cercle Rouge brings to mind the ultimate game of cat-and-mouse. Bob le Flambeur transports me to a casino of some sort. No one has ever been better at creating moods.

There is not a bad movie on my list.