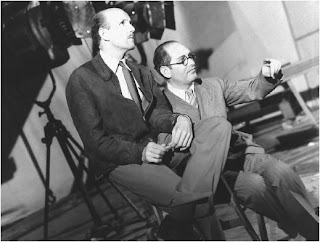 For those that have frequented Goodfella’s since the days of the annual countdown, this one will certainly come as a surprise. Not just the high placement will be a surprise, but the fact that Michael Powell and Emeric Pressburger made the Top 30 at all. As some will undoubtedly remember from the yearly series, I noted that while I did enjoy the couple of Archers films that I had seen, none had really captured me as they had so many people whose tastes my own normally align with. What I also freely admitted at the time, though, was that the sample size I used to base my opinion on was tragically small – I had seen only The Life and Death of Colonel Blimp, Black Narcissus and parts of The Red Shoes. Black Narcissus was the only one of the three that made me think that maybe, just maybe, I needed to delve deeper. Thinking that perhaps I was missing something, I felt that I owed it to myself to experience more of their work and see what all the hype was about. What ultimately won me over were two films from the classic P&P run, which surprisingly enough, neither of which occupy the top two positions in my rankings below.

Watching A Canterbury Tale for the first time was an experience akin to marveling at a more-charming, innocent Mulholland Drive. It’s a weird comparison, I know, but the indefinable allure of the film drew me in immediately. It is funny, beguiling, innocent, menacing, and haunting all at once. All together, it proved irresistible to me. After watching it, I moved on to A Matter of Life and Death, still reluctantly expecting a nice little bit of patriotic propaganda. Then came the opening ten minutes of what I consider to be one of the finest opening sequences ever put on film. That was it – I had to go back to the beginning and plow through as much of their work as possible. What I found was an unbelievably consistent, impressive body of work. Every film I have listed below is worth seeing, regardless of one’s taste. Keeping in mind that I still have not seen everything they made, I still maintain that there is not a bad film in the bunch.

It should be noted that I am in fact cheating a little bit, as I have listed films that are not actually Powell & Pressburger efforts, but are only films that Michael Powell himself directed. I thought that it was worth acknowledging that he made some worthy films on his own, but none of them for me equal anything that the The Archers did together. I include them in my list, but the true reason that either man has made it into this countdown is their unbelievable success as collaborators. The first eight are the real cream of the crop in my opinion.

What I like most about The Archers work is how the strengths of both men are allowed to be fully utilized – Pressburger supplying imaginative story ideas and tightly constructed scripts, Powell utilizing a fantastic visual sense that is both sweeping in outdoor scenic shots and intimate in tension-filled moments like the A Matter of Life and Death opening mentioned earlier. The two come together and create movies that are bubbling over with emotions – sad, jubilant, poignant, passionate, dark, humorous, and many more. One thing that I don’t see mentioned as much as it should be is the sheer playfulness on display. In much of their work, P&P are dealing with deadly serious issues centered primarily on surviving in the face of horrific warfare or obstacles. And yet, much like Hitchcock’s mischievousness while dealing in murder and mayhem, there is an inescapable sense of good humor dancing around everything. Not so much as to invalidate the seriousness, but enough to generate a definite charm that most other directors would be incapable of producing.

And before going straight to the ranking, I’ll put in a word for what I look to as possibly their most underrated film: 49th Parallel. Scouring the web for reviews and opinions on it, it seems to routinely be dismissed as mere propaganda fluff and just a warm-up to what would come from The Archers in the next few years. There’s no denying its propagandist purposes, but I don’t see this as reason to brush it aside. Many of the greatest films ever made have similar origins (Casablanca, anyone?). Not that I’m ready to anoint 49th Parallel an all-time classic – after all, I place it only at #6 below – but the first half of that film in particular is very strong. It might not manage to maintain that same level for the entire length, but I never tire of watching the camera of cinematographer Freddie Young take in the sweeping Canadian landscapes.

Those top two are unlikely to ever be unseated for me, but A Canterbury Tale pushes close… or perhaps once I get the courage to undertake The Tales of Hoffman, which I purposely have been putting off due to my complete antipathy toward the idea of filming an opera, I’ll be pleasantly surprised!