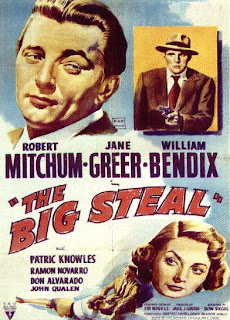 Here it is: the lightweight, stepsister of the all-time classic Out of the Past. Not all of the elements are the same, but there are enough similarities to warrant the comparisons. The most obvious are the two headliners, who comprise arguably the most electric on-screen pair in the history of film noir, Robert Mitchum and Jane Greer, once again working as a couple on the run. Once again, Mexico plays a central role in the romance and the chase. Both are playing different characters, with Mitchum’s Duke Halliday much looser than the sullen Jeff Bailey, but as someone who can’t picture them as anyone but Bailey and Kathie Moffat, it is hard for me not to continually compare the two distinct pairs. Also on board for this film is screenwriter Daniel Mainwaring, who once again turns in a witty, entertaining script. But it is mainly the Mitchum-Greer pairing that leads to the inevitable comparisons and contributes to The Big Steal being looked at as a lightweight follow-up to one of the greatest noirs ever made.

I can’t really dispute that classification – I do tend to view it as a lightweight follow-up to Out of the Past. But you know how many other films, let alone noirs, that I think are even close to the level of Out of the Past? Well, I place it at #6 when I made a rough personal Top 100 films of all time list, so that means very few. The Big Steal lacks the apprehensiveness that lurks at every turn of Out of the Past, but it never really tries to match such foreboding. This is more of a comedy-noir (if such a category exists), with the twists, turns and double-crosses of the best noirs being done almost tongue-in-cheek and with a sly grin. It’s not as dark as many prefer their noir, but it’s a rollicking, fun ride. 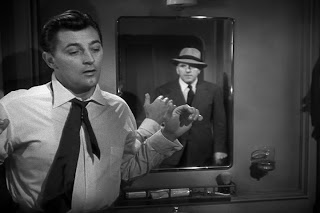 Lt. Duke Halliday and Joan “Chiquita” Graham (Jane Greer) are chasing and being chased across Mexico. They are chasing Jim Fiske (Patric Knowles), Halliday to clear his name after being framed in a payroll robbery and Graham in order to recover the money that her ex-fiance Fiske ran off with. Complicating things for Halliday is Capt. Vincent Blake (William Bendix), an Army investigator who is after him in order to arrest him for the payroll job. Nonchalantly watching all of this action unfold is Mexican Inspector General Ortega (Ramon Novarro), who realizes very early that something is not right about this cast of characters. He sits back, allowing each party to work their plans, and watches for the right moment to swoop in and peacefully resolve everything.

With Don Siegel in the director’s chair, it also means that there will be outstanding action sequences, which is certainly the case. The car chase foreshadows the reputation that Siegel would come to acquire as a tense action director. The effects used to produce the speeding car chases may appear dated now, but they are impressive when compared to other attempts of the era. The story itself has some head-scratching sequences – why would Halliday and Graham ever abandon their car?! – but the plot almost becomes secondary to just watching, and listening to, the interaction between the principals. Mainwaring’s script may not be his best in terms of story development, but it once again shows him to have been one of the finest dialog writers of his time. The banter between Mitchum and Greer is fantastic – Greer as the cynical love interest and Mitchum mastering the humorous tough guy. The work of Mainwaring, both as a screenwriter and of source material for other films, is appreciated by all with an interest in noir, but his name is one that deserves to be even more well-known by general movie fans. Truly an unsung luminary of the era to the general public. 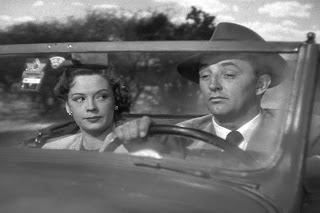 This is the simple formula that led to me to enjoying this one. Rather than comparing it to Out of the Past, I just sat back and enjoyed the ride. I reveled in the give and take between Mitchum and Greer, enjoyed seeing a brighter Mexico than was explored in Out of the Past, and appreciated the uniqueness of a comedy noir.
Posted by Dave at 12:05 AM