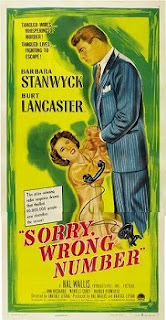 Anyone that has followed the site knows the love I have for Alfred Hitchcock’s classic Rear Window and I can’t help but think about that all-time favorite whenever I consider this similar, but lesser film from Anatole Litvak. The similarity comes from the simple setup of having a character that is confined to a single room, who by chance uncovers a horrendous crime. In this case, due to crossed telephone wires, Barbara Stanwyck’s Leona Stevenson, an invalid, uncovers the planning of a murder. When she tries to contact police and tell them what she heard, they say that they can do nothing on such speculative information. Alone in the house and scrambling to find out why her husband Henry (Burt Lancaster) has not returned home, Leona begins to worry and reminisce about her past. 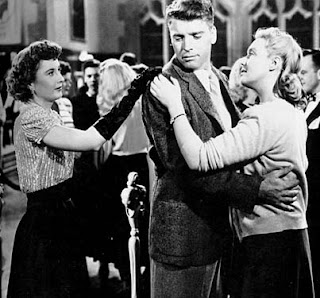 As the story unfolds through flashbacks, recounting the courtship and marriage of Leona, a well-to-do heiress to a chemical fortune, and Henry, the high school dropout that the heiress becomes infatuated with, clues begin to highlight the constant tension of the marriage. Slowly, things begin to emerge that reveal that Henry has been the target of an extortion plot by a shady character named Morano (William Conrad) and has been scrambling to come up with a way to pay him off. He attempts schemes like stealing a valuable pharmaceutical from his father-in-law’s company and even hastening the death of his invalid wife so as to inherit her fortune and pay Morano off. Ultimately, it becomes obvious that the murder plot that Leona overheard on the crossed telephone lines was actually killers discussing her own murder. It then becomes a race as to who will get to Leona first, or if she can alert someone before it is too late.

The movie is based on an original radio play by screenwriter Lucille Fletcher. The radio program was only 22-minutes long, so the flashback sequences had to be added to the script in order to flesh the story out to feature-film length. This fact becomes obvious on repeat viewings, meaning that certain sections of the narrative feel like they were added simply to extend the length of the overall product. This is not to say that the story is necessarily a negative. There is undeniably fluff, though. Still, the story is the most appealing part of the film for me. Performances are just solid, nothing spectacular from anyone involved – even from noir heavyweights like Stanwyck and Burt Lancaster. The story can be unnerving in the way that the Leona character is characterized and photographed. This is a woman who is bedridden entirely because of her own mental problems. There is nothing physically wrong with her – Dr. Alexander (Wendell Corey) makes this clear when he tells Henry that there is nothing that he can do for and that she needs to see a psychiatrist. But these mental problems mean that she has confined herself in her own personal prison. And this is how Anatole Litvak shoots her bedroom, like a dark, foreboding prison cell. Things become unsettling because you are watching Leona trapped in this claustrophobic environment, knowing that physically she could get up and get herself out of danger at any moment, but understanding full well that she likely won’t. 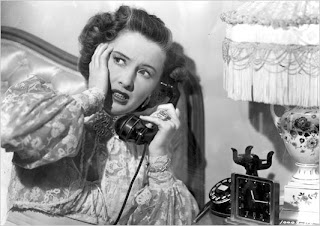 Sorry, Wrong Number also takes itself incredibly serious, perhaps too much so, which is in direct contrast to the dark humor found throughout Rear Window. It’s certainly not in the same league as the Hitchcock masterpiece, but fans of Hitch should definitely check it out and view it as something along the lines of Rear Window’s distant, slightly-older cousin.
Posted by Dave at 12:05 AM