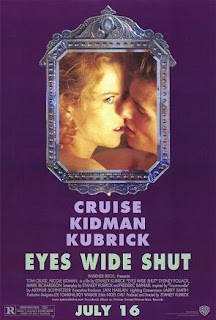 In what many consider to be a very strong year to close the excellent decade that was the 1990s, I am among a minority that looks toward 1999 as a rather tame twelve months in terms of cinematic masterpieces. Most of the “usual suspects” of the year that I have seen I tend to find incredibly overrated. Now, there is one major caveat to this assessment: most of what I have seen for ’99 is American films, meaning that there are some key releases that I simply couldn’t take into consideration. But my reaction to nearly all of the highly lauded American films of this year range from flat-out disliking (The Matrix, Magnolia, Fight Club), to finding good yet not great (The Insider, Three Kings, The Sixth Sense), to not having a clue what to make of it (Being John Malkovich).

There are others, but these are just general examples, and a drawn out way of getting to the point of this opening: I knew very quickly that there were only two selections that I could make and feel good about choosing as the best of a year. With the first option, it was the introduction of a new director to be reckoned with, as Sam Mendes made the crossover from theater to film impeccably. American Beauty must certainly rank among the finest debuts in recent history. In the other case, it was the final film in the career of a cinematic legend, a movie that took three years to fully complete and was released only after Stanley Kubrick’s death. It was nearly a toss-up for me, but in the end I had to side with the enigmatic quality of Eyes Wide Shut that has been embedded in my mind since I re-watched it again specifically for the countdown. I may not be able to perfectly understand everything I see, but the fact that I can’t stop trying to interpret it speaks to the impact that this polarizing film made on me.

Kubrick had not made a film since 1987’s Full Metal Jacket, so this was a highly anticipated return for the man that some consider to be among the greatest directors of all time. He had actually bought the rights to the novella on which the story is based nearly thirty years earlier, so this was a movie that was a long time coming. Shooting began in 1996, but with Kubrick’s notoriously demanding expectations, there were continual delays in shooting. There were also clashes between director and stars, with Kubrick acknowledging unhappiness with certain sex scenes involving Tom Cruise. Co-star Sydney Pollack was quoted as being “exasperated” by the pace that Kubrick was taking in filming. Secrecy surrounding the entire project was unparalleled. All information was kept under tight wraps, in hopes that little about the actual story and production would be known beforehand. All of this worked to create a thoroughly diverse reaction to the film when it was released. Some praised it as a masterpiece on par with anything that Kubrick had ever made. Others were completely turned off by the eroticism of it all and felt that it was garbage. Many didn’t know how to respond. 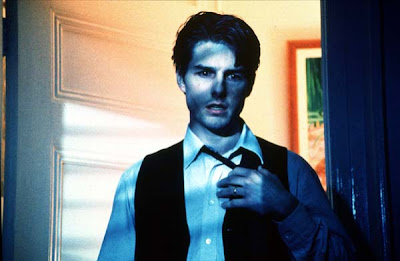 The story opens with a seemingly perfect couple in Dr. Bill Harford (Tom Cruise) and his wife Alice (Nicole Kidman) on their way to a fashionable New York cocktail party. At the party, which is beautifully shot by Kubrick, the seeds for the rest of the chaotic tale are planted. Alice, having had too much to drink, begins dancing with a suave guest, creating a palpable atmosphere of sexual tension. Bill, meanwhile, is wooed by two beautiful women trying to seduce him and whisk him away for a clandestine tryst. Before this can happen, the doctor is summoned to help the party’s host, Victor Ziegler (Sydney Pollack), who has what appears to be an emergency. While having a sexual rendezvous with a young woman, Ziegler realizes that the girl has passed out from a dangerous mixture of drugs. Bill revives her and assures Ziegler that the compromising situation will stay between the two of them. While at the party Bill also runs into a former medical school colleague, Nick Nightingale (Todd Field), who dropped out and is now making his living as a piano player. Nick tells Bill to stop by at a downtown club if he has the chance, as Nick is playing there for the next few weeks.

Following the party, the couple has a conversation in bed that is the catalyst to kick off everything that follows. What began as an intimate evening between the two quickly degenerates into Alice revealing to her husband that on the previous summer’s vacation at Cape Cod she became obsessed with a naval officer she met. She talks about having set in motion plans to meet the officer, but is vague as to the particulars. This destroys Bill’s previous idea of possessing the perfect marriage and relationship and sends him on the twenty-four hour escapade at the center of the film. Along the way he encounters surreal events one on top of the other – angry young bigots who taunt him, a prostitute who begs him for meeting, a costume salesman who pimps out his own daughter, and finally receives a mysterious tidbit of information from his old friend Nick Nightingale. Nick tells him that he has been getting jobs playing for some sort of secret society that makes him play blindfolded. Bill pries the password out of him, manages to work his way into the party, and discovers an unimaginable world of sexual ritual and excess. 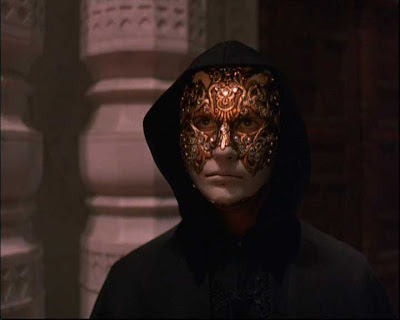 The first time that I saw it (which, I have to say, was actually a few years after its initial release), my reaction was probably closer to the assessment of being unable to decide what to make of it. Even now, after revisiting it a few times, I’m not certain that I could recount a completely consistent theory on what takes place. Is everything to be taken literally? Does Bill actually experience all of the quirky, disturbing events over the course of one wild night? Or is it possible that some of it is imagined or actually a dream? I have even read some hypotheses that argue that drugs are somehow in Bill’s voyage. Interpreting it as a dream is appealing to me, as it moderates some of the craziness of many of the episodes Bill finds himself in. But, even this has problems, as to my eye there are no markers to signal where reality and hallucination diverge. I don’t claim to need a big sign saying “Reality begins here!” but I do think there needs to be some sort of logical points at which one could reasonably argue the dreams begin or end (such as can be done in a movie like Lost Highway, for just one example).

So, as I said, I’m probably not entirely consistent in my own interpretation, but what can I do? The reason that such inconsistency really doesn’t bother me is that I don’t approach the film attempting to read deep meaning into it as so many others do. For those that do so and are successful, I envy you – if ever a movie called out for being analyzed in this fashion and would be rewarding to do so, this is it. There are many things that I could interpret, but nothing earth-shattering. But my main interest in the story is very simple. I am fascinated by the hypnotic nature of it all. Kubrick is able to move at a lumbering pace, jumping in episodic nature from one scene to another, and gradually build tension to an unnerving boiling point. By the time that Bill goes to revisit the site of the secret party, the film has become a full-blown thriller. Perhaps I’m watching at its most surface level, but it works incredibly well in this way.

Performances are all around solid, if not particularly spectacular. Cruise is Cruise – which means sturdy as usual. If anyone deserves specific praise, it is probably Kidman who is outstanding in her manic moments. As far as individual accomplishments, though, those that I single out are not surprising. The grand master Kubrick does whatever he wants throughout. Always someone who could draw a scene out, he does that perfectly here, marrying these extended sequences to music that creates an unbelievable sense of dread. In fact, the soundtrack might be the most haunting aspect of the entire film. The use of recurring classical pieces is mesmerizing, particularly the dissonant sounds of Gyorgy Ligeti’s “Musica ricercata” piano cycle. It is unsettling, perfectly mirroring the anxiety that builds within Bill. This is a perfect marriage of soundtrack to scene and kudos to music director Jocelyn Pook. 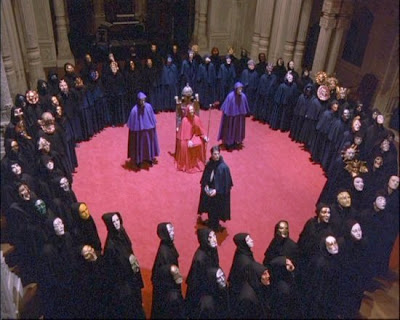 This is another peculiar situation that I have brought up in past years of the countdown. Eyes Wide Shut will be the only appearance of Stanley Kubrick in the entire series, yet there are definitely two other of his films that I prefer to this final effort. Oh well, this is a film that I am happy to include in the countdown, if for nothing else than to see how others react to it. It’s a polarizing film – not helped in the least by the way that it was marketed as something akin to a softcore porn – and I honestly never expected to grow into such a fan of it. It might not be the best work of Kubrick’s career, but it was a film worthy of serving as his final statement in cinema.

Other Contenders for 1999: As I said, a lot of critically acclaimed films from this year that I don’t care for – Paul Thomas Anderson’s Magnolia, the Wachowski’s The Matrix, David Fincher’s (who I am a fan of) Fight Club. But there are still a number of others that I would single out as favorites from this year. I think that Martin Scorsese’s Bringing Out the Dead is underrated in his overall body of work, and I particularly like the performance of Ving Rhames in this one. I also enjoy Anthony Minghella’s The Talented Mr. Ripley, even though it does at times feel a bit too formulaic. It still looks great and is an enjoyable mystery. Others I would acknowledge: The Insider (Michael Mann), Three Kings (David O. Russell), and, yes, also The Sixth Sense (M. Night Shyamalan). And of course, I already pointed out that my definite first runner-up in this year is Mendes’ American Beauty.
Posted by Dave at 12:05 AM