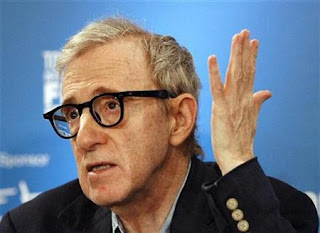 The thought of trying to make it through Woody’s entire filmography before starting this project was nearly enough to call the whole thing off. It would be a virtual impossibility, unless I watched absolutely nothing from anyone but Woody and thus had gaping holes in the lists for many other directors. At the same time, leaving Woody out of such a list would be a total lie on my part – there is little doubt that he ranks among my twenty-five favorite directors. So, with that in mind, I tried to pick and choose as best I could, getting to as many of his films that I had not seen in such a short span of time. His work rate over the last few years makes things infinitely more difficult, as even at 75 years of age, the man still manages to crank out a film every year. Even if they are not of the high quality of his best work, you have to admire the dedication. Anyone willing to do that kind of work after accomplishing as much as Allen has must truly love what he is doing.

It is kind of easy to take potshots at Woody now, considering that his indefatigable work rate has resulted in a number of bad films and that the salacious details of his personal life are now the punch lines to jokes that he would have been making in his prime. While I personally think that his production in the 2000s has been better than it is generally regarded, that wouldn’t be the defense that I would offer when arguing why the man is an all-time great. The 1980s, for me, are far and away my favorite period of Allen filmmaking, as I think his run with Mia Farrow in that decade eclipses even his great collaborations with Diane Keaton. There is much personal preference in that statement, I know, but I don’t hesitate in making such a claim - his 70s output is great as well. More specifically, though, what separates Woody from so many of his contemporaries is his versatility. Fans of his work recognize it quite often, but to the general movie fan at large, a perception still persists that Allen is little more than a comic. Comedy is certainly incorporated in some form into all of his films, but his body of work is incredibly diverse. In the 1980s, specifically, you get to see nearly every facet of immense talent – the satirical side in Stardust Memories; the farcical mockumentary Zelig; the traditional Allen-type film in Broadway Danny Rose; the nostalgia of The Purple Rose of Cairo and Radio Days; the romantic comedy of Hannah and Her Sisters; the serious drama of Crimes and Misdemeanors. Going further back than the 80s, you see even greater versatility in the physical comedy of films like Bananas. There may be unifying themes and elements in each of these films, but to argue that they are all alike is ludicrous.

As for the assertion that Allen always plays himself in his movies, or at the very least is playing the same persona, I can’t necessarily argue. His characters do tend to mirror each other. I would counter in saying that many a great Hollywood star put together amazing careers playing similar characters (John Wayne, Jimmy Cagney), but even that claim is almost unnecessary. I would never argue that Allen is the same kind of acting talent as Wayne or Cagney - he most definitely does not. The thing is, though, he doesn’t need to be. His strengths lie in his direction and his writing. The writing in particular is second-to-none. His acting is not needed to carry one of his films. What should never be overlooked is how good he is at handling a lot of talented actors and using his script to have them play off of each other. For me, Hannah and Her Sisters is the prime example of this.

So here is a Woody Allen list that, unfortunately, comes nowhere near covering his entire filmography. Even still, there are a lot of great films listed here.

And still so many to see!

Next up is a true icon and, according to many here at Goodfellas, the man who should properly be called the hardest-working American senior citizen in cinema: Clint Eastwood.
Posted by Dave at 12:05 AM