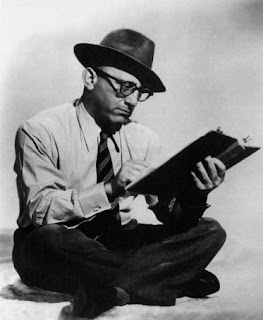 In case my counting down my 100 favorite films noir did not give it away, I’ll reiterate the fact that I am a film noir junkie. I try and see anything and everything resembling a noir that I possibly can. I have seen a lot in the short amount of time that I have been obsessed and feel like I have a pretty good handle on the greatest stylists in the genre/style. A number of the finest directors to ever work in United States at some point dabbled in noir – Wilder, Lang, Hawks, Tourneur, Ray, Huston, Welles, the list could go on. Some of these names will be, and already have been, featured in this favorite directors series. And even with such giants of cinema, if exclusively considering true noirs produced by such directors, I don’t think that I would choose any of them as my personal favorite handlers of noir. If forced to make such a selection, I’d actually have to go with this man: Robert Siodmak. He made two of the finest noirs of all time, a handful of others of high quality, and was instrumental in developing the template that others followed throughout the classic noir period.

Born to Polish Jewish parents in Germany at the turn of the century, Siodmak was successful in German cinema in the 1920s before the Nazi rise to power. For obvious reasons, he was not a favorite of the Party. Unfortunately, I have not seen any of the work he produced in his native country, but when Universal Studios signed Siodmak to a seven-year contract in 1943, he quickly developed the distinctive style that he has come to be identified with. The horror picture Son of Dracula features expressionistic lighting and visual style that Siodmak would perfect a few years later, allowing him to take a rather standard B-movie storyline and give it a noir feeling. By 1944, Siodmak would embark on a string of noirs and noirish thrillers that matches up favorably with any of his contemporaries – The Suspect, The Spiral Staircase, The Killers, The Dark Mirror, Cry of the City, Criss Cross, and The File on Thelma Jordan all in a five-year period.

Clearly, he did not _only_ make noirs. The Spiral Staircase, The Suspect, Son of Dracula, even The Dark Mirror all contain elements similar to noir, but are not fully enmeshed in the style/genre. So to call him a one-trick pony would be an overstatement. His horror work is just as superlative, with a masterwork like The Spiral Staircase arguably being an even greater visual achievement than his best noirs. Just thinking of the movie the word “black” comes to mind. Dark, dark black. Black to the point of zero visibility. The kind of shadowy, dark black sets that only could be achieved on a sound stage in the classic studio system. It really has to be seen to be appreciated.

Even so, there is a reason that the zenith of Siodmak’s days in Hollywood came at the height of the classic noir cycle. By the mid-1950s, his career was already on a downward path. But watching the movies produced during the decade-long burst of creativity that contains Siodmak’s finest work, it should be quite obvious why I think so highly of him. His use of lighting and shadows is like a textbook in noir. His depiction of anguished characters, carrying baggage from past lives or relationships, is always compelling. Siodmak is certainly not underrated by those that have any familiarity with his work, but his name remains one that deserves to be more well-known. I rank him a master director.

Next in the countdown is a contemporary of Siodmak's and another man with multiple great noirs (among others) to credit: John Huston.
Posted by Dave at 12:05 AM