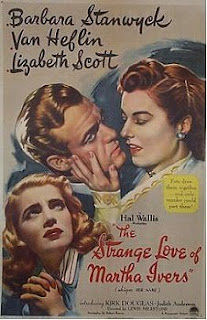 - "Couldn't you see blackmail in his eyes?"

If star power appeals strongly to you, then The Strange Love of Martha Ivers is likely one that you feel should be moved much higher in these rankings. It has star power bursting from every crevice. The amount of big names and talent is astounding. The four leads are now seen all-time greats. Barbara Stanwyck had already staked a claim to be the toughest femme fatale in all of noir. Van Heflin was no newcomer, but this would kick off a wonderful noir run. Lizabeth Scott, in only her second film, shows the promise that she would more than live up to over the next twelve years. And making his acting debut, Kirk Douglas began his stellar career with a bang. The music was composed by the great Miklós Rózsa. The list of films with the name of producer Hal Wallis attached to it is unreal – Little Caesar, The Maltese Falcon, Sergeant York, Casablanca to name only a few. The screenplay was written by celebrated writer, and future director, Robert Rossen. Although not a regular in film noir, director Lewis Milestone had already become a prominent figure in Hollywood and snagged two Academy Awards for Best Director. Hell, the assistant director was only Robert Aldrich!

Typing these credentials out still amazes me. I suppose you could look at this one of two ways – that with this much talent involved, it would be hard for a movie not to succeed; or, you can give credit to Milestone, Wallis and company for bringing all of the elements together to create a compelling noir melodrama. I obviously lean toward the second interpretation. Like a great coach winning with the best players, there is something to be said for bringing everything together cohesively. The only knock I have is that although it is obviously well-crafted in every way, it can’t help at times feeling a bit like a run-of-the-mill studio production. Rossen’s script is gritty enough to lift the film above that description and the all-star cast boasts enough talent to sell it all. 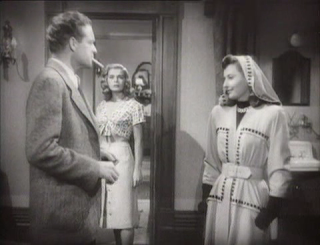 The story follows the links in the lives of three childhood friends (or, at the very least, two childhood friends and an acquaintance) that grow up in Iverstown, Pennsylvania. The town is dominated by the dictatorial Mrs. Ivers (Judith Anderson), who essentially owns the entire town. Her young nice Martha despises the authority of her aunt and rebels by running off with her friend Sam. When the two are caught in a railcar, she is returned to her aunt, while Sam gets away. But when the two meet up later that night at the Ivers home, along with a pal named Walter O’Neil, a supposed accident occurs – Mrs. Ivers is killed and the young Martha inherits an incredible fortune. In the aftermath of the accident, Sam runs away, while Martha and Walter stay behind and grow into adulthood. Martha (Barbara Stanwyck), who busies herself managing her fortune, marries Walter (Kirk Douglas), who is the city prosecutor. When Sam (Van Heflin) wanders back to Iverstown, the quiet life of the couple is thrown into chaos. The problem is that as prosecutor, Walter had convicted an innocent man for the murder of Mrs. Ivers in hopes that it would cover any possible entanglement of Martha in the crime. Seeing Sam as the one person who can implicate them, Walter begins scheming to hustle him out of town. Meanwhile, old passions between Sam and Martha are ignited, which in turn are complicated by the beautiful Toni (Lizabeth Scott).

As I said, what stand out most to me are the Robert Rossen script and the performances that bring it to life. This does not attain its noir status on the basis of expressionistic lighting and inventive camera work found in other classics. Instead, the anguish felt by each character is what validates its inclusion in a countdown like this. All of the principles are suffering from psychological torment. The entire bond between Martha and Walter appears to be built on an uneasy alliance – Martha submits so as not to be implicated in the murder of her aunt, Walter stays in the relationship due to guilt about his sham prosecution. Both are quick to hold these things over the other’s head. Sam is the trigger to send both of them into full-scale panic. And even though he professes a loyalty to the recently arrived Toni, he seems like he is still at times unable to overcome the spell that Martha casts over him. 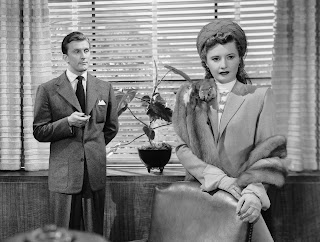 For those that haven’t seen it (assuming there are some), I won’t reveal anything about the conclusion, except to ask if there is any more iconic finish in noir? I can think of a few that might top it, but it’s as memorable as any other finale.
Posted by Dave at 12:05 AM