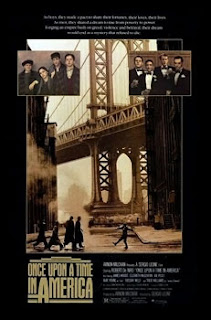 a.k.a.: C'era una volta in America

It has always been funny to me how Italian director Sergio Leone, a man whose name is synonymous with the term “spaghetti western,” would make his final statement in cinema by crafting a New York City gangster film centered on Jewish hoodlums. I don’t know which part of that statement makes me laugh more. That the man who made the classic Man With No Name Trilogy and the incredible western epic Once Upon a Time in the West, comes back in the 1980s and arguably trumps every movie he ever made – and does so with something far different from the westerns he was acclaimed for. Or even funnier might be the fact that here is a man from the country where the stereotypical “gangster,” as personified in The Godfather films, hailed from. It would only be natural to assume that he would follow a similar route in depicting a large, powerful Italian-American crime syndicate. Instead, Leone chose to focus on a tight-knit foursome of Jewish hoodlums as they grew up in Lower Manhattan and maneuvered to stay relevant in the underworld.

Leone quickly drops you right into the story, as early in the film there is a brutal torture-murder, showing that former gangster Noodles Aaronson (Robert De Niro) is on the run from somebody. Precisely who or what has summoned Noodles back to New York is unknown, but the viewer is quickly drawn into the mystery, finding out the details at the same time that Noodles himself does. As Noodles returns to his old haunts on the Lower East Side, he begins to fondly look back upon his childhood in the area and remember the core group of friends that he grew up with. As a kid, he and his friends began as a wannabes rolling drunks at a nearby bar. Soon they began to work their way up even higher, doing favors for local gangster bigwigs by helping them hide bootleg liquor shipments from the coast guard. This increase in local status comes at the expense of other neighborhood tough guys, resulting in trouble for the young gang. After a fight with one such neighborhood tough, one of Noodles’ pals is killed while Noodles himself is sent to prison. 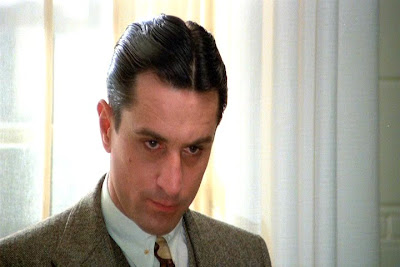 When he emerges from jail as a man years later, Noodles finds his pal Max (James Woods) waiting for him. He quickly comes to learn that his old gang – Max, Patsy (James Hayden), and Cockeye (William Forsythe) – is riding high and making a killing during Prohibition. They are now major players in the underworld, even making alliances with powerful Italian gangs. Noodles’ life is still complicated, though. His lover affair with a childhood friend Deborah (Elizabeth McGovern) doesn’t work, resulting in his appalling rape of her before saying goodbye. Meanwhile, as Max hungers to move the gang into respectable white collar rackets, Noodles longs for nothing more than the easygoing status quo. As he says, he likes the stench of the streets. When Max begins to hatch a scheme to hit Fort Knox for one big final score, Noodles thinks his friend might be losing his mind. Rather than go through with participation in the heist, Noodles instead tips off police in order to catch his pals before they get hurt. Unfortunately, all three are killed in the ensuing battle over the robbery.

Or are they? Long after, when Noodles has left New York and abandoned his life of crime, he begins receiving mysterious letters and messages from someone that appears to have knowledge of his past. Noodles is drawn back to the city to investigate and makes a discovery that seems miraculous to him. There is a highly influential politician named Christopher Bailey that bears an uncanny resemblance to Max. 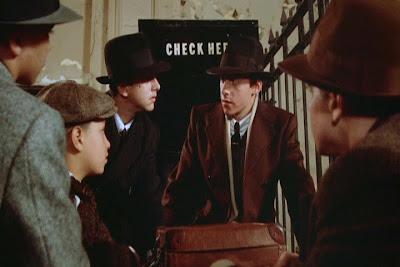 This synopsis overly simplifies the entire story and leaves many supplementary subplots and characters out. The film really has to be seen in its entirety in order to take in how huge and epic in scope it is. For many folks this is not an easy film to love. Even when I watched it for the first time in high school I was a little put off by the pacing of the first third of the film. Based on the topic of the story and director at the helm, I suppose I was expecting something along the lines of The Good, the Bad and the Ugly meets The Public Enemy. It's certainly not that. The early pacing, where many people are put off from the film, is actually now a favorite of mine. I love the depiction of the early lives of the kids growing up in the slums of Manhattan. It makes them very endearing personalities, so that you actually care what happens to them when you see them grow into men. There are truly touching scenes in these early sections, such as when Patsy buys a cupcake in order to lure favors from a promiscuous neighborhood girl. While waiting for her to come out, the temptation of the treat is too much for him to resist. He tries to placate himself simply to taking a swipe of the icing. When that doesn’t suffice, he goes for the cherry. When that too is not enough, he ends up furiously consuming the entire thing.

The other thing that works incredibly well for a movie of this length is how true everyone seems to stay to the personalities they exhibit as kids. When Noodles emerges from jail, the grown-up versions of his pals seem like I would have expected based on how they acted as children. Max sees himself as the leader and brains of the gang, always wanting to feel in charge. Noodles is the right hand man, possibly even the true power, but is content to take a step back and let Max play the big boss. Patsy is the suave, young-looking ladies man. Cockeye is the loyal bulldog. Just as they were as kids fighting their way up to overtake the dreaded Bugsy. 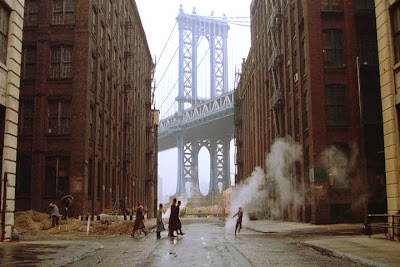 There are also scenes that are just incredibly powerful. In particular I am always struck by the scene in which the childhood gang is hunted down by Bugsy (James Russo) and the young Dominic is shot and killed (Noah Mozelli). Even more striking for me are the final scenes in the film, as an aged, graying Noodles travels to the mansion of Christopher Bailey to try and unravel this puzzle that he finds himself in. When he comes face to face with Bailey, who clearly has to be his old pal Max, it is one of the most gripping scenes I’ve ever seen. It’s downright sad. Noodles tells to the story to “Bailey” about what happened – about how he turned in a friend in order to save him – and it feels like someone finally being able to say goodbye to a longtime friend. It ranks among my favorite scenes of all time from any movie. 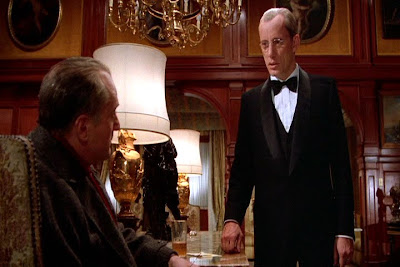 An interesting topic I at least want to address is a theory that has been proposed by some that the older version of Noodles returning to New York is actually a fantasy. It is interesting and not something that should be quickly dismissed. The thing that makes it so intriguing is that the movie both opens and ends in 1933, in the same location – Noodles at an opium den shortly after having called the cops on his gang. The hypothesis then is that in this drug-induced haze, Noodles begins to reminisce about his past and dream about a possible future. There has never been any definitive proof one way or the other, although it is said that Leone himself at one point endorsed such an interpretation. I don’t know of any way to prove or disprove it, but I think that the story works much better when it is thought of this way. It explains how it is that something as preposterous as a high profile gangster like Max could fake his death and then recreate himself as a public figure, all the while maintaining the exact same physical appearance. It also helps to explain how it is that Noodles’s love interest, Deborah, miraculously never ages throughout the entire film, a time frame spanning some 30 years. This could be a result of Noodles imagining her as he wants to remember her. And it would seem to validate the reasoning for beginning and ending the film with Noodles getting high in an opium den in the ‘30s. I's not essential to read the film this way, but this is my own take on it. Fortunately, it works quite well either way, reading it as a dream or literally.

I also cannot go the entire review without acknowledging the extraordinary score from Ennio Morricone. Everything that the man ever did was brilliant, but a strong argument can be made that his score here is the finest work he ever produced. Personally, I slightly prefer the music of Once Upon a Time in the West, but it would be hard to imagine this film eliciting the same response from viewers without Morricone’s contribution. The music perfectly fits the mood, which is what Morricone did best.

Other Contenders for 1984: This was an outstanding year in cinema. There are a number of films that would be contenders in any year and that I actually prefer to winners in many other years of this countdown. The standout among the runners-up for me is Milos Forman’s Amadeus. I love everything about it – the sets, the costumes, the characters, and yes, the music. A great film and one that I can’t believe is being left out of the countdown, but that is how it goes. Other outstanding films from this year are: Blood Simple (Coen Brothers), Broadway Danny Rose (Woody Allen), The Killing Fields (Roland Joffe), Paris, Texas (Wim Wenders) and Stranger Than Paradise (Jim Jarmusch).
Posted by Dave at 12:03 AM