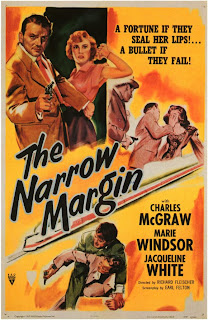 - "Sister, I've known some pretty hard cases in my time... you make 'em all look like putty."

For a low budget crime thriller, Richard Fleischer’s The Narrow Margin has acquired a formidable reputation. Just do a quick internet search about the movie and take in some of the superlatives that are showered on it – in a number of instances, it is referred as possibly the best B-movie ever made. While I may stop short of that highest of accolades, I do concede that it would have to be a contender in such a mythical competition. What makes The Narrow Margin such a great movie is that it accomplishes what every low budget film must do in order to succeed: take a simple story, incorporate a believable yet surprising twist, and populate the movie with colorful, memorable characters. And what elevates it even further is the something that cannot be said about many noirs – it’s just plain fun. 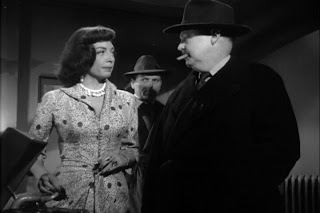 Taking place primarily on a train, the story follows the travails of Det. Walter Brown (Charles McGraw) who is charged with transporting the widow of a recently-slain racketeer across the country so that she can testify before a grand jury. Along with his partner Gus Forbes (Don Beddoe), they are instructed to pick up the strong-willed Mrs. Neall (Marie Windsor) and see that she is delivered to the prosecutor without incident. Right from the start it is made clear that this will be no simple job. The uncooperative Mrs. Neall dawdles, leading to a shootout with gangsters sent to silence her. Forbes is killed in the crossfire and it is then left to Brown to complete the transport. Once they make it to the train, Brown realizes that he is essentially battling two equally trying opponents – the gangsters trying to ice his witness and the stubborn Mrs. Neall who is completely ungrateful for the protection provided by Brown. Along the way, Brown befriends Anne Sinclair (Jacqueline White), a young mother traveling with her son and nanny. This association drags Anne into the entire mess, as Brown scrambles to keep everyone safe and complete his job, all the while resisting tempting bribes that are offered at every turn.

It is most often identified for being a “train movie,” which is not surprising, but my favorite moments in the film actually come very early when Brown and Forbes are picking Mrs. Neall up at her apartment. The back and forth between the detectives and the gangster’s wife is as crisp as anything in noir and sets the stage for the moral acrobatics that Brown will play out in his mind throughout the film. Very early on it is made clear that he is upset that the life of his partner – a family man with a wife and children – has been sacrificed so an unappreciative, snobbish trophy wife living off the riches of a criminal can be safely transported. The encounter in the apartment and the ensuing shootout in a shadowy staircase are pure noir, photographed very well by Nicholas Ray favorite George Diskant. The bulk of the action on the train plays more like a conventional thriller than noir, but the snappy dialog and taunting between Neall and Brown keeps it in familiar noir territory. 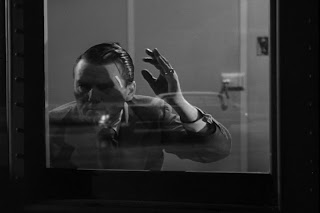 It’s nice to watch ultimate tough Charles McGraw as a good guy for once, rather than the usual second-rate hoods he plays in so many movies of the era. His Det. Brown is more of a hardened hero, maintaining the cynical outlook that just seems to fit with McGraw’s overall persona. The real treat here, though, is Marie Windsor, who plays Mrs. Neall as hell on wheels. I’ve referred to her as “ungrateful” already in this piece, but even that is an understatement. She openly taunts Brown, as if at any moment she will decide to call the whole thing off and not follow through with her testimony. This is the cause of the distress that haunts Brown, as he does not want to come to the conclusion that his good friend and partner could have potentially died for no reason. Windsor is spectacular, combining sex appeal and pure attitude. She may not follow through on much of what she says, but Windsor’s Mrs. Neall talks as good a game as any other dame in film noir.

There’s a wonderful twist that I have avoided revealing that works quite well, which is to be commended. Too often, a twist like this would not come off nearly well as it does. The number of intense moments that occur in the close confines of the train solidify The Narrow Margin not just as a top-flight noir but also as one of the premier action movies and thrillers of the era also. This is another one that I might ultimately regret not ranking even higher.
Posted by Dave at 12:05 AM