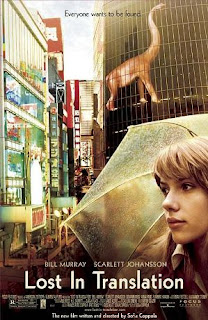 Ah, how Sofia Coppola has redeemed herself! Until seeing this 2003 release, the key memory I had of Sofia was her role as Mary Corleone, the most glaring weak spot in what was an otherwise outstanding and underrated final chapter in The Godfather trilogy. Maybe she is not the only one who deserves the blame – certainly one has to point the finger at her father for throwing her in _way_ over her head. It was a vitally important role to the film and it was like watching amateur hour. I’ve held a grudge ever since. Fortunately, the writing and directing skills of Francis’s little girl are light years ahead of her acting. After receiving moderate critical acclaim for her adaptation of The Virgin Suicides in 1999, she hit one out of the park with Lost in Translation.

The film can be classified as a romantic-comedy, but it’s different from the usual movie that gets placed in this category. The romance, in fact, never really blossoms into full-fledged romance. But the relationship that develops between Charlotte (Scarlett Johansson) and actor Bob Harris (Bill Murray) is so much more affecting than any sort of physical relationship could possibly be. 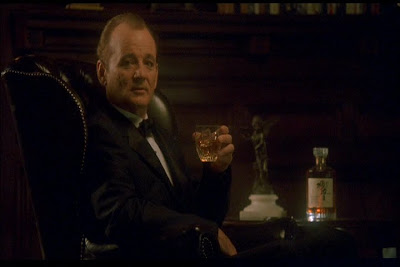 Set in the chaotic metropolis of Tokyo, both Charlotte and Bob detest their stays in the city. Bob, an aging movie star, is there because of a multimillion dollar endorsement deal to shoot commercials for Suntory whiskey. In his loneliness at the hotel, he begins to reflect on the fact that he is missing time with his children and gradually drifting apart from his longtime wife. Charlotte, a newlywed and recent college graduate, comes to Japan because her husband (Giovanni Ribisi) is a celebrated photographer who is there to do photo shoots with rock bands. With little to do in the city, Charlotte begins to question the direction of both her life and her young marriage. Neither of them is able to sleep at nights and begin to continually bump into each other, usually around the bar in the lobby. Deciding that they might as well spend their boredom and sleepless nights in each other’s company, they strike up a friendship that seems incredibly deep right from the start. 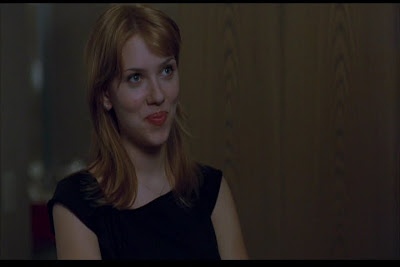 The two are able to talk to each other about their deepest concerns and feelings. Charlotte wonders whether her marriage will get any easier over time, while Bob responds with tales of his deteriorating 25 year marriage. Both of them are unsure of where their lives are going to lead them once they leave Tokyo and they seem to take comfort in knowing that the other understands their dilemma.

But the duo does more than reflect on the weighty questions of life – they also have fun together. In the late night excursions they make into Tokyo, the city truly does come alive. Their bond is further strengthened through these outings. They go drinking with friends of Charlotte in a local bar and are then chased out by bar employees and go running through the bustling streets to escape. The middle aged Bob goes with Charlotte to a house party and proceeds to cut loose drinking, dancing and singing. The highlight is probably the trip to a karaoke bar where a drunken Bob performs Elvis Costello’s “(What’s So Funny ‘Bout) Peace, Love, and Understanding.” These upbeat scenes are filmed at a swift pace, with the feel of handheld cameras running through the streets and arcades of Tokyo. 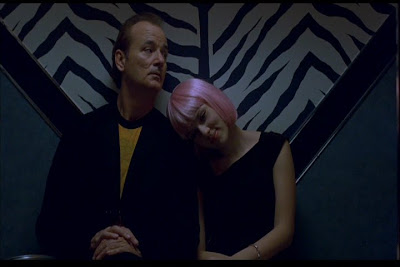 The friendship grows incredibly intimate, but never crosses the line where the movie turns into a cheesy adultery/fling flick. The fact that the viewer can palpably feel the intensity of the relationship, without any cheap romance, is a testament to Sofia Coppola and the strength of her screenplay (it won the Academy Award in 2003 for Best Original Screenplay). It is almost too hard to put into words how she does it, and I wonder if this article is doing justice to how deftly Coppola pulls it off. The movie just exudes a certain passionate feeling that completely grabbed me. It is absolutely sublime storytelling.

The lead performances were eye-opening for me. I knew that Bill Murray was among cinema’s best comedians. But I have to admit that I was in the dark as to how great an all-around actor he is. I've seen realized that he has other outstanding dramatic performances, but this was one the that sold me. The movie isn’t completely devoid of comedy, allowing Murray to put his well known skills to use. He is still quite funny, but it’s an understated comedy, delivered through simple measures like facial expressions and inflection of words. But for the majority of the film he is just playing a regular person, someone who possesses the usual humor and sarcasm. It is staggering to think that this is same guy who played Carl Spackler in Caddyshack. Rather than such over the top antics, Murray is tranquil as Bob, but is even more impressive. Murray was nominated for the Best Actor Academy Award, but lost to Sean Penn’s performance in Mystic River. I love Mystic River and think that Penn was outstanding in a pretty conventional crime drama role. But to me Murray’s was clearly the best performance. Scarlett Johansson, who was just 19 at this time, turns in the best performance I’ve seen from her as well. While she may have been overshadowed by the brilliance of Murray, it’s still impossible to deny that she is a bona fide actress and not just another gorgeous face.

The ending of the film is the clincher. It is ridiculously simple, yet so incredibly moving. In a cab to the airport shortly after an emotional goodbye to Charlotte at the hotel, Bob sees Charlotte wandering the streets. Telling his driver to pull over, he manages to chase her down. Momentarily facing each other, the two tearfully embrace as Bob whispers something into Charlotte’s ear. A subdued smile then spreads across her face. What does he say? Your guess is as good as mine, but I know what I like to think was said.

This is not only my favorite for 2003, but it’s among a handful of my favorite films of the entire decade. It was shocking how much this movie resonated with me, because I normally am not a fan of this kind of film. This is the type of movie I was expecting when I finally got around to watching 1994’s Chungking Express (which I am on record as not caring for). Perhaps that was a misunderstanding of what that movie was intended to be, but I can’t help comparing the two and reflecting on how much better Lost in Translation worked for me. There is no greater feeling than expecting to dislike a film and then completely falling in love with it. Sofia Coppola has completely vindicated herself for her performance in The Godfather III, and I would even go so far to declare that she has crafted a film that remains better than anything that her father has made in 30 years.

Other Contenders for 2003: This is another solid year, with at least two other films that I think can qualify as truly great films. My first runner-up has to be Clint Eastwood's Mystic River. Adapting Dennis Lehane's excellent novel, Eastwood makes the darkest movie of his career and assembles a great ensemble cast to keep things movie. Then there is Peter Jackson's final installment in the Lord of the Rings trilogy. I think that I slightly favor the first time, but The Return of the King is very close. Other favorites from 2003: The Dreamers (Bernardo Bertolucci), Seabiscuit (Gary Ross), Finding Nemo (Andrew Stanton and Lee Unkrich), and The Best of Youth (Marco Tullio Giordana)
Posted by Dave at 12:05 AM