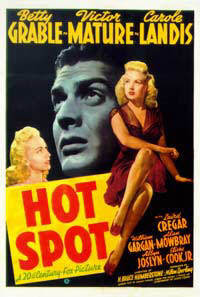 Say the name “Laird Cregar” to yourself. It just sounds menacing. And in this noir from early in the classic cycle, Cregar turns in a sinister performance that steals the spotlight from the superstars that it was originally intended to showcase. Betty Grable, Carole Landis and Victor Mature are the stars of note, and all three are quite good in their roles. But it is Cregar that leaves the lasting impression. He plays Detective Ed Cornell, the man leading the investigation into the death of upstart model Vicki Lynn (Carole Landis). Suspicion begins to drift toward entertainment promoter Frankie Christopher (Victor Mature), who is responsible for guiding the career of Vicki and propelling her from a common waitress to an in-demand model and actress. Realizing that the evidence is pointing toward him, Frankie tries to hide out with Vicki’s jealous sister Jill (Betty Grable). It soon becomes obvious that Detective Cornell is hellbent on pinning the charges on Frankie, regardless of his guilt. It is then a race to see if Cornell can nail him on the charge before Frankie finds the killer on his own. 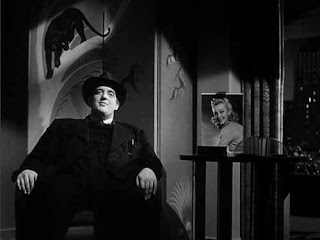 It’s a very noir setup, utilizing flashbacks and hardboiled dialog to recount the story of a starry-eyed young girl’s rise and fall. Coming as it does in 1941, when the stereotypical “noir look” that has become so familiar was still being developed, I Wake Up Screaming can justifiably be viewed as a very influential film. The early interrogation scenes, with Cregar and the police grilling a petrified Frankie Christopher, are the epitome of film noir. These scenes are like a playbook for how a prototypical noir should look, and even after viewing countless numbers of noirs over the years, they still hold up as some of the most impressive scenes I’ve seen. The shadows of the interrogating officers don’t simply fall onto back walls; they completely envelop Christopher and heighten the anxiety. These sequences are made all the more impressive when you consider the journeyman director and cinematographer that combined to make them. Without going to a reference book or film web site, I wouldn’t be able to name another film that either man ever worked on. Yet in I Wake Up Screaming, director Bruce Humberstone and cinematographer Edward Cronjager leave behind at least one lasting impression in the world of cinema. The work of both men shines throughout, utilizing low-key lighting and pitch-black shadows at every opportunity. 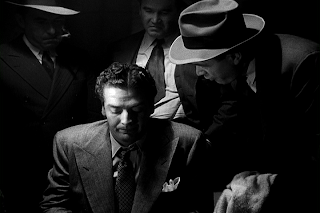 The production of this film has an equally interesting story – the kind of Hollywood folklore that never ceases to fascinate me. The original novel from pulp writer Steve Fisher was set in Los Angeles, giving an up-close look at the world of Hollywood and the consequences that can come with a rise in the industry. In 1941, though, Darryl F. Zanuck was still the head of 20th Century Fox and he had decreed that Hollywood-insider movies were strictly off limits. This accounts for the film being set in New York, but really doesn’t detract from the overall product. While no longer the entertainment capital of the world, New York still offered enough shady nightclubs, restaurants, and darkened streets to maintain the proper atmosphere.
Posted by Dave at 12:05 AM