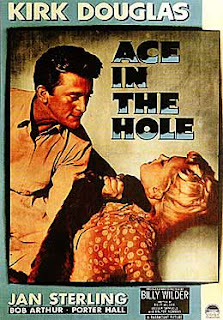 - “I met a lot of hard-boiled eggs in my life, but you… you're twenty minutes.”

I am very pleased to see Billy Wilder finally enter this countdown, as for the last few weeks I have been on a serious Wilder kick. Outside of the regular viewing that I have been doing in re-watching a lot of noirs to map out exact rankings, the majority of my movie watching has been devoted to Wilder, who is quite possibly becoming my favorite director – as in favorite of all time. The merits of Wilder, as both a director and a writer, would fill an entire essay on their own, but for now I’ll just point to his versatility as being the thing that never ceases to fascinate me. Comedies (Some Like it Hot, The Apartment), mysteries (Witness for the Prosecution), and film noir (Double Indemnity) are all areas where Wilder was able to shine with equal proficiency. I go back and forth on which Wilder I like best. Being the noir fanatic that I am, it’s hard to deny the lure of masterpieces like Double Indemnity and Sunset Boulevard. Lately I have been very much into the caustic wit that Wilder is able to infuse into each of his comedies, combining his fantastic writing ability with his obvious directorial skills.

All of which makes Ace in the Hole an interesting film for me, because I look at it as something of a cross between a Wilder noir and a Wilder comedy. Although it is set mostly outdoors on a New Mexico mountain, the noir credentials are solidly established through themes like the distorted American Dream, entrapment, and a woman that – if she is not a true femme fatale – is at the very least hardhearted. By comedy, I don’t mean laugh-out-loud, rollicking humor like Wilder would deliver in later films. The comedy here is the result of a cynical, biting script, the bizarre, out of control scenario, and one-liners and humor so dry that it nearly cracks the celluloid. 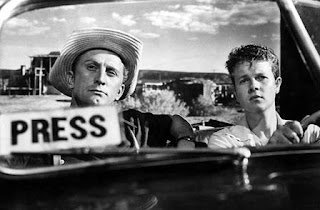 Kirk Douglas turns in a whirlwind performance as veteran reporter Chuck Tatum, a onetime big city newsman who is stranded in New Mexico looking for a job. He swallows his pride and signs on at the small town Albuquerque Sun-Bulletin. But he longs to find one popular story that will be his ticket back to the big city dailies. While on assignment for a rattlesnake hunt, Tatum and young photographer Herbie (Robert Arthur) stop at a filling station and hear about a local accident. They learn that a young man named Leo Minosa (Richard Benedict) has recently become trapped in a cave while hunting for Indian artifacts. Seeing the opportunity for a national headline, Tatum moves quickly to begin manipulating the situation to his advantage. He begins to manufacture a national drama out of a local incident, building the story bigger and bigger. Tatum conspires with the local sheriff and lead engineer to leave Leo in the cave for a few days longer than necessary so that the story can continue to swell. He forces Leo’s wife Lorraine (Jan Sterling) to stay in town and play the grieving wife rather than allowing her to leave as she originally planned to do. What results is a media circus that was probably too outrageous to be believed in 1951, but today looks frighteningly prophetic.

The prophetic nature of it all is what is most striking. The idea of people flocking to a remote mountainside in New Mexico, buying souvenirs and concessions as a man is trapped in a mountain sounds ridiculous? Oh, really… how about thousands camping out for days to make fools of themselves on a national television singing competition? Or paparazzi camped out on Los Angeles streets to make sure and document what type of coffee the latest Hollywood star is drinking? Suddenly, it seems less preposterous. But it’s not just the media that Wilder attacks – he lampoons everyone involved. Tatum is the heartless reporter, someone who will let a man die just to get a story and further his career. Herbie, the naïve young journalism school graduate, is powerless to resist Tatum’s planning for career advancement. Even the general public – the audience of the film included – is ridiculed, as Wilder mocks how willingly people enjoy the misery created by people like Tatum. This is Wilder at his most cynical, as everyone is shown to be a buffoon. 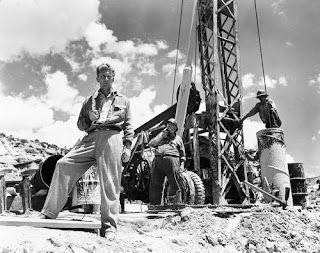 This might be Kirk Douglas’s greatest performance. As solid as the supporting performances are, particularly from Jan Sterling as the widow secretly hoping for her husband’s demise, Douglas dominates every scene. He perfectly delivers the sordid comments and observations created by the superb screenwriting team of Wilder, Lesser Samuels and Walter Newman. I might regret not moving this one into the Top 40, but it is no slight to be positioned where it is. This is one of Wilder’s best and absolutely essential for any fan of cinema, not just film noir.
Posted by Dave at 12:05 AM