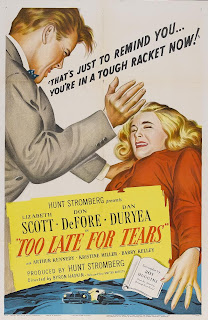 To me, Byron Haskin’s Too Late for Tears is the quintessential underappreciated B-noir of the 1940s. Boasting much of the low-budget splendor that Detour is often praised for, Too Late for Tears takes shoddy production, an over-the-top pulpy script, and direction and set design aiming to make things as dark as possible, and ends up producing one of my all-time favorite noirs. In terms of low budget masterpieces, it ranks among the very best of the genre, only slightly behind more celebrated classics like the previously mentioned Detour.

The story is another instance of one coincidence leading to unforeseeable ramifications for those involved. When Alan Palmer (Arthur Kennedy) and his wife Jane (Lizabeth Scott) are driving through Hollywood on their way to the party of a business acquaintance, they have a spat over the host’s wife. As a result of their argument, the car swerves to the side of the road and its lights begin flashing. The flashing lights are mistaken by an oncoming car as a signal, so as that car passes it tosses a bag of cash into the Palmer’s backseat and keeps going. Opening the bag, the couple discover that it is stuffed full of cash. Before they have time to think, the car that was actually supposed to receive the money emerges. Acting quickly, Jane jumps into the driver’s seat and takes off. When they make it home safely, Alan argues that they should turn the money over to the police immediately, realizing the potential trouble that they could find themselves in. Jane, on the other hand, argues that they should hold onto the cash. She manages to sweet talk her husband into holding onto the money for at least a few days and they stash the bag in a Union Station locker.

Thinking that they are only keeping the money until they decide what to do with it, Alan is shocked to learn that while he is away his wife is going on lavish spending sprees. Still, Jane manages to keep Alan at bay concerning the money, but her machinations are complicated when corrupt police detective Danny Fuller (Dan Duryea) pays her a visit and makes it clear that he knows she has the money. Not wanting to be completely cut out from the score, Jane cuts a deal with Fuller – she’ll split the money with him. Eventually, not even this will appease the rapacious Jane, as she knows that Alan will never consent to such a deal. So rather than drop everything, she instead conspires with Fuller to murder her husband and ultimately end up with all the money for herself.

I won’t go into any greater specifics, as to do so would detract a bit from the experience of a first-time viewer. If you enjoy a pulpy tale, with plenty of twists to keep the unsuspecting viewer guessing, then you’ll certainly enjoy this story. The actual twists and turns, though, aren’t as important as is the incredibly simple premise I outlined earlier – the idea of how one chance event, and how one responds to it, can be dramatically alter one’s life. Alan’s initial reaction is to turn the bag of money over to the police and be done with it. He spots what a trap the money could be. But for Jane, who hides her aspirations for wealth and affluence under her façade of the happy housewife, the bag being tossed into the backseat is the catalyst that unleashes her fantasies. Her ambition starts out sensible enough, as she pleads with her husband claiming that she simply wants them to enjoy a life without worrying about finances. It seems a reasonable argument. But the minute that her plans are threatened, it becomes obvious that her ambition is completely unbridled. This underlying, gradually building ambition is sold perfectly by Lizabeth Scott. And it’s not an easy role to sell, as Jane is not initially identified as a likely femme fatale. She seems like a traditional postwar homemaker who is simply tempted by a stash of cash. As she morphs into such a ruthless, conniving personality, it is a bit shocking.

Despite the great qualities possessed by the film, it is yet another in the long line of noirs that lacks a proper DVD release. In fact, it is a public domain film that can be watched around the Internet, with the best version I have come across being at Archive.org. It can also be obtained in budget film noir box sets, but the quality of nearly all of these is downright horrible. Because of the level of production at the time of it was filmed, it is a movie – again, similar to something like Detour – that is never going to have pristine quality. Still, it deserves much better exposure than it currently receives. Another tragically under-seen noir that should be required viewing for all film noir fanatics.
Posted by Dave at 12:05 AM