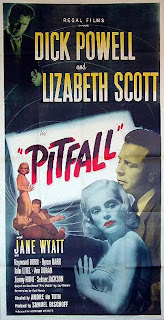 At this point in the countdown, chances are that most of you can at least guess at reasonable final baker's dozen. The ordering might be up for debate, but I would be willing to bet that if you push came to shove, that every person following this countdown would at least know nine or ten of the remaining films that will be involved. Even so, the fun still remains in trying to figure out how they are going to be ranked against other classics. But… this one might keep folks from going a perfect 13-for-13. It is not an unknown quantity, particularly among those with a serious interest in noir, but Pitfall is far from being the household name that it deserves to be. It is a unique entry in comparison to most other films noir, as it unfolds not in the sordid underbelly of a major American city, but transports this same seediness to the most terrifying of places – the suburbs.

The film opens to the domestic bliss of postwar America, where a family sits down to breakfast – a wife preparing the meal, the father reading the morning paper at the table, a young child shattering on about the day at school. This is the situation that John Forbes (Dick Powell) finds himself in, with wife Sue (Jane Wyatt) and son Tommy (Jimmy Hunt). But rather than feeling the contentment that outsiders assume he must be experiencing, John feels restless. He is bored with the daily routine – a rut so predictable that he knows the precise minute that he will step off the train and be picked up by his wife for the drive home. John laments that the big dreams that he and his high school sweetheart Sue had when they were newlyweds have slowly been compromised for suburban tranquility. So when in the course of his work as an insurance agent he meets a gorgeous, exciting woman named Mona Stevens (Lizabeth Scott), he cannot resist the temptation to add a little excitement to his life. He originally meets Mona because he is trying to recover restitution from a robbery that his company paid the insurance on. Mona’s former boyfriend Bill Smiley (Byron Barr) pulled off the heist and hid some of the money by buying things for Mona. John goes to her in hopes of recovering these goods and recouping some of his firm’s losses. When he meets Mona, he is intrigued by her and decides to take up her invitation to go to dinner. As he grows fonder of her, he decides that he will cut some slack and allow her to keep a prized speedboat that Bill bought her. Under normal circumstances, it too would be seized by the company, but he makes an exception out of fondness for Mona.

Things would have remained secretive if not for the private eye the insurance company originally hired to track Mona. “Mack” MacDonald (Raymond Burr) is also smitten by Mona and is jealous of the affair that seems to be developing between her and John. MacDonald confronts John with evidence he gathers on his own – seeing the two of them together and, more importantly, his letting her keep the boat – and threatens to blow the lid off everything. This seems to bring John to his senses, as the affair is broken off. Things do not end there, though. When Mona continues to rebuff MacDonald’s advances, he figures he will get back at the her and John by letting the soon-to-be-released Bill Smiley know about the affair. 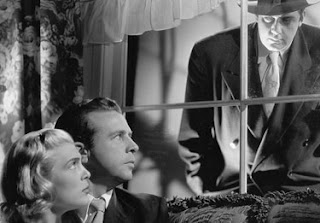 The interesting thing is that the affair seems to develop less because of romantic attraction between Mona and John than because of deficiencies in the lives of each person – with her former fiancé in prison, Mona is scared of being on her own and latches onto the steady John; John, on the other hand, just wants something to come into his life that will shake things up. There is obviously a connection between them, and maybe it is a little romantic, but it never once comes across as the kind of passionate affair that is at the center of so many noirs. While it can be inferred, it actually is never explicitly revealed that the relationship is ever consummated. But even if it is not as physical as one would expect, both Mona and John recognize how salacious just their being together in public could be. That is why they scramble when Mack begins threatening to bring this information public. Both are able to recognize that, in typical noir fashion, the damage has already been done simply by the two engaging in things like boat rides, dinners and late-night kissing. Thus, they are able to quickly decide that it is prudent to walk away from the relationship.

This is probably the most unique aspect of the entire film. In a typical film noir, Lizabeth Scott’s Mona Stevens would function as the traditional femme fatale and continue to pursue the married Forbes until his life is ruined. She actually does the opposite. When she finally discovers that John is married, _she_ comes to him and tells him how ridiculous it would be for them to continue their affair. It appears as if things can go back to normal and both can go their separate ways. Mack, of course, ensures that will never be able to happen. Still, what is important to recognize is the role that Mona plays in it. To those looking at it from the outside, it would be easy to classify her as a homewrecker, but she cuts off the affair precisely because she does not want to live with such a label. There actually is no femme fatale in the film – she inadvertently functions as a femme fatale would, tempting the nominal hero into actions that have serious repercussions. But she does so without full knowledge of the situation. The instant that she discovers what John is risking, she backs off. A strong case can be made that Mona is actually the purest character of them all that has either horrible taste or incredibly back luck when it comes to men.

The direction from de Toth and cinematography from Harry Wilds are far from groundbreaking. But there are a few scenes that are fantastic, particularly the late night stalking by Smiley and the subsequent shootout in the dark. On the whole, though, de Toth’s direction has a very detached feel to it. He puts the camera in the best place to take in the action and then just lets things unfold. It works though, because the three lead performances come close to being career bests. Dick Powell works as the cynical workingman. Lizabeth Scott was never better as the unlucky dame. Raymond Burr is at his menacing best. This is storytelling so strong and so well-acted that any possibility of a dated feel is irrelevant. Even if it is dated, it’s an interesting document of the infamous “postwar malaise” that runs as an undercurrent throughout so much work of the late 1940s and 1950s.

For those that have seen it, I’d be interested to hear thoughts on this question: is it the best films that André de Toth ever made? I think it is and I don’t hesitate to proclaim it so. For those that have not had the opportunity, seek this one out however possible. It is another unfortunate film that has no DVD release, but hopefully that will someday be remedied.
Posted by Dave at 12:05 AM