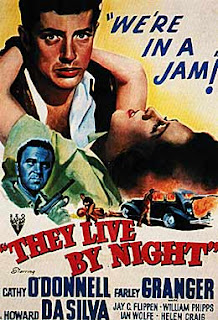 When I first saw this debut film from maverick filmmaker Nicholas Ray, I wasn't sure exactly how much I liked it. Having seen countless “lovers on the run” films over the years, I was unsure of how this one stacks up against other greats – Bonnie and Clyde, Gun Crazy and other similar movies. I’m still not of the opinion that it ever reaches the level of either of those films, but comparing it to them can be a bit misleading. They Live by Night takes a slightly different angle on the general storyline, resulting in a much more sensitive, romantic tale.

Based on a novel that would later also be adapted for Robert Altman’s Thieves Like Us, the screenplay from Nick Ray and Charles Snee plots an ill-fated romance from its reticent beginnings to its tragic conclusion. Escaped prisoner Bowie (Farley Granger) falls for the young, naïve Keechie (Cathy O’Donnell), who is the niece of his partner Chickamaw (Howard Da Silva). After escaping from jail with Chickamaw and T-Dub (Jay C. Flippen), he decides to serve as the wheelman in their planned bank heist. Whereas Chickamaw and T-Dub plan this as the first in a long line of jobs, Bowie hopes to use his cut to retain a defense attorney to overturn his original sentence. When Bowie is hurt in the aftermath of the heist, he is returned to Keechie’s home where the young girl nurses him back to health. Falling for each other, the two young lovers decide to leave their past lives and start anew. Unfortunately, Bowie has been identified as one of the men involved in the bank job and a legend has begun to grow around him. Soon, he is being credited with pulling off jobs throughout the country, when in fact he is doing nothing but planning a marriage and normal life with Keechie. When Chickamaw tracks the newlyweds down, it means that they are on the run not only from the law but from their past associations. Chickamaw manages to convince Bowie to come along for one last job, to help his now-broke former partners. Feeling an obligation toward the two men who helped him escape from prison, Bowie reluctantly leaves his pregnant wife and attempts to finally free himself from his past. 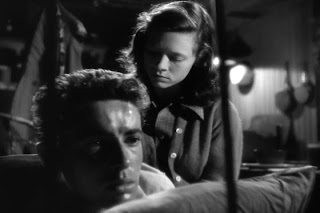 The most striking aspect of the film is how it manages to be both tender and menacing. Once Bowie and Keechie go on the run, it essentially turns into a full-on romance story. Although it shows its datedness at times (the “I don’t know much about kissing” bits can be a little corny), the affection that quickly develops between the couple feels genuine. You can’t help but root for these two dreamers, both of whom are portrayed as victims of circumstance – Keechie for the family she is born into and Bowie for having a knack for getting situations into plans that quickly spiral out of his control. So when they finally arrive at something like a honeymoon getaway, it is striking to see their ideal family life shattered by the reentry of Chickamaw. Chickamaw, played brilliantly by Howard Da Silva, is like the bad penny in their lives, the man who neither of them can completely outrun. He is made all the more menacing by the fact that he seems to recognize this power – he knows that they will never be free so long as he is able to hound them, and he uses this leverage to manipulate Bowie. Da Silva is brilliant in this evil role. 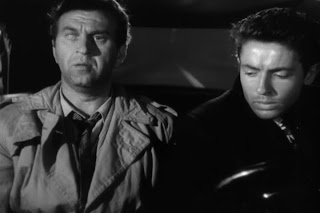 This is also a fun one to watch knowing what Nicholas Ray would go on to do in his career. Many of the themes and techniques that Ray would explore throughout his later work can be seen here in his first outing as a director. Ray was a master at conveying a sense of isolation or exile. Similar to what he would do with his landmark Rebel Without a Cause seven years later, in They Live by Night he explores how outcasts try and make their own way in the world. The isolation that they experience along the way – whether true or imagined – can be seen in later work like Rebel, On Dangerous Ground, or even In a Lonely Place. The loneliness is handled differently in each case, but the tremendous sense of isolation is palpable in all of them. And one need only watch the opening aerial shot, following the prison-break getaway car, to recognize the storytelling through the camera that Ray would excel at throughout his career.
Posted by Dave at 12:05 AM