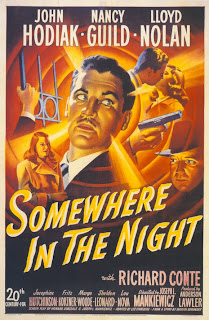 What would a film noir countdown be without at least one good amnesiac story? While not used to extremes in noir, it is a fairly common technique, and with Joseph L. Mankiewicz’s Somewhere in the Night we have what I consider to the finest use of the plot device. I certainly understand that it can be viewed as gimmicky, but in this case it is a perfect reflection of the times – a returning World War II veteran, unable to remember a single detail of his previous life, struggling to find his place in the world he left behind when he went to war. Thematically, it’s on a wavelength similar to that of The Best Years of Our Lives or, as was discussed previously, even the story played out in The Dark Corner. It asks some very interesting questions that must have been percolating at the time. As the mystery surrounding the past life of George Taylor unfolds, the question becomes unavoidable: is he actually better off not digging too deeply into his past? 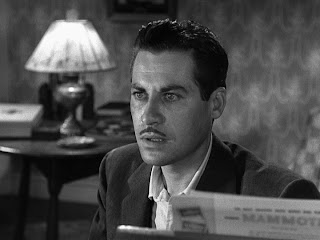 John Hodiak stars as George Taylor, a marine injured at Okinawa who is left without any memory of himself or his past. The only clues to his existence are two letters found in his wallet, one written by a spurned ex-girlfriend and the other from a friend named Larry Cravat. Sent back to the States after being medically discharged, Taylor makes his way to Los Angeles in search of the unknown Larry Cravat. Early in his search, Taylor realizes that there is a powerful shroud that his developed around this Cravat character, as no one he talks to wants to give the slightest detail about his existence. When posing questions at a nightclub leads to Taylor being beaten by two thugs, he knows that things are even more mysterious than he thought. When he finds an ally in club singer Christy Smith (Nancy Guild), he gets further help from her employer Mel Phillips (Richard Conte) and his friend Lt. Donald Kendall (Lloyd Nolan). As details about Cravat begin to pile up, the disappearance of $2 million in Nazi money at the start of the war appear to implicate the mystery man in a murder-robbery. But Taylor believes that he too had some role in all of this and continues to dig into his past to find out the truth.

I got through that without any real spoilers, as this is one that you need to go into relatively fresh. I’ve revealed nothing that will spoil the experience for those that have not seen it. The plot sometimes gets a little out there, and might require a slight suspension of disbelief at times, but for all of its supposed outlandishness it follows a surprisingly tight script. Joseph L. Mankiewicz has long been recognized as a brilliant writer and here, in only his third screenwriting credit (co-written with Howard Dimsdale and adapted by legendary Lee Strasberg), he juggles things very well. Mankiewicz was a brilliant dialog writer and he uses this skill to add some lighthearted moments to what is otherwise a rather tense, startling storyline. Perhaps others disagree with labeling the story as “startling” but I’ve always viewed it this way. And what makes it disquieting, I think, is the ability of Mankiewicz to make everything feel like one protracted nightmare. All we know about George Taylor is that he has just suffered through Okinawa, survived a terrible injury and returned to the U.S. The only thing he wants to do is discover who he is. And he can’t do it. He is sent running, chasing, and investigating throughout Los Angeles without any answers until the end. And when he finally gets the answers he is looking for, you have to question whether he should have just left well enough alone. 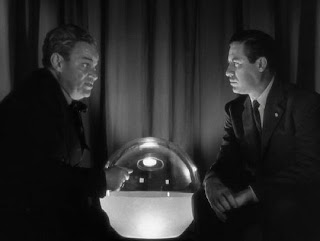 Mankiewicz would certainly make better and more lauded films in the near future – in fact, he has other noirs that I find superior. But in only his second directorial effort, I think that he fashioned an outstanding film that captures an outlook and feeling of an era. This is an underrated film noir.
Posted by Dave at 12:05 AM