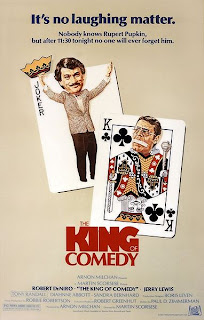 - "Why not me? Why not? A guy can get anything he wants as long as he pays the price. What's wrong with that? Stranger things have happened."

The King of Comedy is an interesting case study in how certain groups look at a movie. This statement runs the risk of making me sound incredibly pretentious and elitist, but I stand by it. The general consensus among the average movie fan is that this is a sad attempt by Scorsese to make a comedy – perhaps the title implies that one would expect to have a laugh out loud experience. Many feel that it shows that Marty needs to stick to crime and gangster films. To many critics and hardcore cineastes, however, The King of Comedy remains a Scorsese gem. It may be overshadowed by the other great Scorsese-De Niro collaborations, but it remains among the finest work of either man.

Picking it as my #1 of 1983 makes it obvious that I am clearly in the second camp. And I hate to even use the description in that first paragraph, as it could be interpreted as me claiming to somehow be more “enlightened” in my appreciation of this film. That is not the case at all and in many instances my views line up closely with the average moviegoer. Still, I think the dynamic I describe is accurate and incredibly fascinating. While the casual movie fan would be unlikely to cite The King of Comedy among Scorsese’s best, many critics are very quick to do so. There are only a handful of films that I can think of that have a divide like this. This is certainly not to say that there are only a select few who admire this movie. Its critical reputation is currently skyhigh. And at the 1980s countdown at Wonders in the Dark, Allan (ever the picky critic!) placed it at #22 in his best of the decade. Most of the fine folks who comment there were in agreement that it ranks among the best in Scorsese’s career. There was some expected disagreement on placement in terms of the entire decade, but nearly everyone agreed that it deserved much praise.

I might be misguided in this belief, but I genuinely think that the title throws many unsuspecting viewers. Even I went into it thinking that it was intended to be more of a traditional comedy than it actually is. While there certainly are many moments where you can’t help but chuckle at the antics of the unforgettable Rupert Pupkin, it is not the same type of laughter you experience with a classic comedy. It is more of a very uneasy laughter – a kind of uncomfortable amusement. You’re laughing, but you’re more troubled than amused. 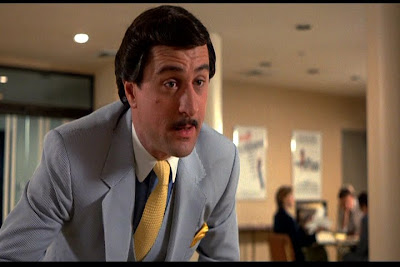 The story follows an oddity of a man named Rupert Pupkin (Robert De Niro). Rupert is a rabid autograph seeker, hanging around stage doors and back alleys in hopes of tracking down passing celebrities. At the same time, Rupert is dying to break into show business and fancies himself an aspiring comic. While on one of his autograph missions, he happens to wind up in the back seat of famed comedian and talk show host Jerry Langford (Jerry Lewis). Wanting nothing more than to get the crazed fan out of his car, Jerry tells Rupert to stop by his office some time and drop off some of his material. Rupert immediately takes this to mean that he has found his big break.

Predictably, things don’t exactly pan out as Rupert sees them happening in his grandiose daydreams and hallucinations. In these visions, he is seen dining with Jerry and hobnobbing with other celebrities around New York. Such ambitions are quickly dashed however when Rupert is rebuffed at Langford’s office. He never actually gets the chance to see Jerry and is instead told to work on his material. In response, Rupert hatches a crazy kidnapping scheme with fellow celebrity hound Masha (Sandra Bernhard), in which they plan to kidnap Jerry Langford. Instead of asking for money, Rupert’s ransom demand is to be given a spot on Jerry’s show that night so they he can display his standup skills to the entire world. 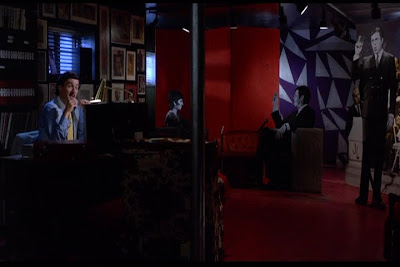 Every time I watch this movie I am struck by how far ahead of its time it was. Certainly there was a thriving celebrity culture at the time it was made, but it doesn’t even compare to things today. Think about it – not only do we still have autograph fanatics and stalkers of celebrities, we now have things like Twitter and other digital media sites that allow people to follow the activities of their favorite celebrities 24-hours a day. It seems like every celebrity who has the inclination is granted a reality TV show. Writer Paul Zimmerman and Scorsese take a cynical look at such a culture and do so with quite disturbing results.

Rather than looking at it is a normal comedy, I am much more inclined to compare this to another of Scorsese’s celebrated works, Taxi Driver. Although told in a much more lighthearted manner, I always see parallels between the stories of Travis Bickle and Rupert Pupkin. Both are lonely men who have visions of themselves doing great things – in Travis’s case ridding the New York streets of “scum” and for Rupert it is becoming a famous and loved comedian. When neither see their situations improving, they snap. And in both cases there are debates over how things turned out for each of them. After Travis went on his murderous rampage, he appears to be celebrated in the press. Is this true or is it Travis simply dreaming about how he views his actions? For Rupert, after serving prison time for the kidnapping, it looks as if he becomes the famous personality he has always wanted to be, with book deals and on-stage offers. But are these actually happening or are they simply more of the hallucinations of grandeur that have occurred throughout Rupert’s life? The brilliance of the ending in The King of Comedy is that it is even more ambiguous than in Taxi Driver. I always read Taxi Driver literally, believing that what is shown is what happened. It’s even harder to do this with The King of Comedy because of the daydreams and fancies of Rupert that we have already been privy to. 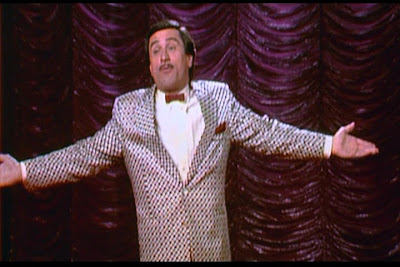 De Niro’s performance is just as impressive here as it was playing the crazed Bickle. At times it almost feels too real, as some of the situations you see Rupert in are so embarrassing it’s hard to watch. I’m the kind of person that can actually become embarrassed for other people and that is the situation that I constantly find myself in watching this movie. The first time I watched I nearly had to turn away when Rupert went to Langford’s office expecting a grand reception. De Niro plays Rupert with such sincerity it’s hard not to feel the embarrassment. The performance remains animated and at least moderately funny throughout, but it is ultimately as disturbing as watching Travis Bickle. And that is a statement that I never thought I would make.

The supporting performances are also very, very well done. Jerry Lewis essentially plays himself, with biting humor and one-liners. But you can’t help but feeling for him as he tries to figure out how to get this lunatic out of his life. Sandra Bernhard as Masha is just as deranged as Rupert, if not more so. While this movie does not show off the technical chops of Scorsese as many of his other virtuoso pieces do, I don’t think it is any coincidence that such strong performances are drawn out of each of the actors. His films are never one-man shows and always display a number of characters who are able to play off of each other – and most importantly, have actors strong enough to make such interplay interesting.

Other Contenders for 1983: I have to say that this is a very weak year for me. I don’t know if it’s just a result of me not having seen enough or if it is in fact as weak as it looks. There are two big omissions for me, as I could not get hold of copies of L’Argent (Robert Bresson) or Nostalghia (Andrei Tarkovsky) in time to watch for this countdown. Neither was available on Netflix, which is normally how I watch those that I don’t already own. My #2 for the year would actually be Woody Allen’s mockumentary Zelig. I still find it hilarious. Of the others, here are the films that I would see that I still like: Danton (Andrzej Wajda), The Right Stuff (Philip Kaufman), and yes even Scarface (Brian De Palma), although its inclusion here is more a result of few others coming to mind to replace it. I have also always had a soft spot for The Outsiders (Francis Ford Coppola) since I was kid, although that might be more a result of my falling in love with S.E. Hinton’s novel from the first time I read it. Still, I continue to enjoy it.
Posted by Dave at 8:48 AM