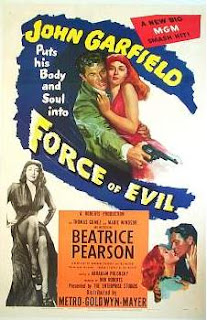 Here we have the first to fall of the films being predicted as legitimate Top 10 contenders. I’m fully aware of the fact that this directorial debut from Abraham Polonsky has a very passionate following and is considered by many to be among the finest noirs ever made. Truthfully, I have only recently warmed to the film, which I came away from somewhat disappointed when I saw it for the first time. If I had judged it solely on that single viewing experience, this would have placed much lower in the countdown, if it was included at all. I’ve now reached the point where I understand that the strengths of the film far outweigh the key weakness that continues to reveal itself each time I watch.

It is an intriguing plot, concerning a numbers syndicate that is striving to convert their interest in the policy racket into a legitimate business. The idea, as conceived by policy boss Ben Tucker (Roy Roberts) is to bankrupt the smaller numbers banks through a fixed drawing. The idea is that the only banks left standing are those in the syndicate that will move in to set up the legal lottery. Leading this push into the respectable business world is lawyer Joe Morse (John Garfield), whose perspective becomes increasingly muddled as he is pulled deeper into the underworld. While wanting to help his client Tucker, Joe also feels a small sense of loyalty toward his brother Leo (Thomas Gomez), an independent numbers man who refuses to join Tucker’s ruthless combination. Not wanting to see his brother left penniless, Joe first offers him a position in the Tucker group, which Leo sternly refuses. Joe then begins working to try and keep Leo from losing his life savings, while at the same time not ruining the carefully laid plans for the big fix. The deeper Joe gets, the more he realizes that he is going to be forced to make a final decision at some point – either his loyalties are completely with his brother or are completely owned by Tucker.

The general storyline is fantastic, which I assume means that kudos should go to the original source material from Ira Wolfert. The script, on the other hand, is where I find the only glaring flaw in the film. Which is surprising to me, because Polonsky had already proven himself to be an outstanding screenwriter – his script for the previous year’s Body and Soul was wonderful. The issue here is that things are just too damn talky. Characters talk and talk and talk, speaking on topics and things that feel far too unnatural. For instance, when Joe visits Leo to try and bring him into the syndicate, the conversation between the two brothers – both of whom have intimate knowledge of numbers – is like listening to two men recite textbook outlines and definitions of how the policy racket works. Perhaps this is just an artifact of the times and such dialog was necessary to spell out to naïve contemporary audiences precisely how the business works. Still, it doesn’t help the aging of the film. I realize that this might seem like the most minor of complaints, but at this stage such minor issues are what make separating quality films possible. 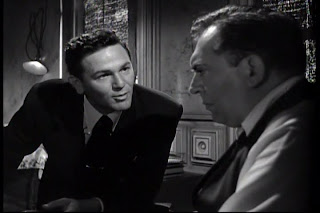 But the positives far outweigh any negatives, the aforementioned speech included. Even with the awkward monologues outlining underworld schemes, John Garfield turns in his usual sensational performance. There are certainly strong supporting performances from Thomas Gomez and Marie Windsor, but Garfield is the center of everything – his Joe Morse narrates, is the focus of the story, and is the character that the audience becomes emotionally tied to. Few could play the smooth talking tough guy like Garfield. Here he also gives a fully developed performance, showing Joe to be at times sentimental and at times downright ruthless. What becomes compelling is his inability to comprehend the fact that the more he succeeds at his job, the more he hurts people close to him. By the time he comes to this realization, he has lost things that cannot be restored. I don’t think it’s the best performance of Garfield’s career, but that’s only because he has so many impressive achievements on his resume. For almost any other actor, this would likely top a best-of list.

Polonsky shows himself to be very much in control in his debut film. Working with cinematographer George Barnes, the photography is at times beautiful. They also make great use of shadows, although the light-dark contrasts are generally not as stark as other noirs. The location shooting in New York, displaying Wall Street, the Washington Bridge and other locales is very impressive. Some of the sequences truly are remarkable – the ones that instantly come to mind are Joe's stealthy visits to his law office and the final discovery of the body among the rocks under the bridge.

Much has been written about the implications of this film on the lives and careers of director and star. Both Polonsky and Garfield would be blacklisted shortly afterward on the basis of the perception that Force of Evil was an indictment of the capitalist system by the two left-leaning personalities. There is no question of the consequences that resulted from this belief, but I’ve never really examined the movie at this level. I never feel sympathy for anyone in the movie, Leo included, so have trouble distinguishing who is being exploited by the system. I just take it at face value, which means enjoying a damn fine film.
Posted by Dave at 12:05 AM