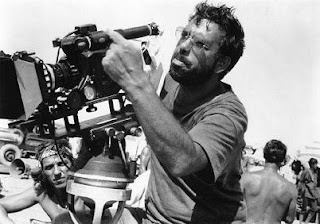 - “A number of images put together a certain way become something quite above and beyond what any of them are individually.”

Placing Francis Ford Coppola in a countdown of this scope has been, without question, the most difficult task of the entire project. Trying to slot him into a comfortable position made me examine exactly how I was judging and ranking each director, and at the end of it all, I’m still not certain that consistency has been maintained. I say this because, as I have repeated many times in discussions on various blogs throughout the ‘net, I am a person who is much more interested in seeing how high one can reach, rather than dwelling on misfires. I don’t care if a director makes ten duds if he manages to squeeze out one or two masterpieces along the way; I’m much more interested in devoting my time to the great ones than worrying about the stumbles. Considering Coppola’s career in that frame of mind, he could make a strong case for jumping all the way to the top spot. If we’re stacking up irrefutable masterpieces, Coppola in my opinion boasts as many as any other director you will find in this Top 30. In my eyes, Coppola _owned_ the 1970s. I’d be leery of anyone claiming that The Godfather, The Godfather: Part II, or Apocalypse Now are not truly great films. I'd personally make the argument of elevating The Conversation to that level as well. On the basis of those four films alone, Coppola would enter this countdown.

And that’s precisely what makes placing him so difficult – it is almost solely because of those four masterpieces that he merits such lofty praise from me. The Godfather Part III and Dracula are very good films, but to me they pale in comparison to Coppola’s best. The conundrum is made even more difficult by the fact that at this stage of the countdown – meaning the Top 10 – every single director has multiple masterworks on their resume. So a certain amount of depth and consistency has to come into play. In that area, Coppola doesn’t quite match up to those ahead of him.

I also am not one of those who constantly cry and lament over the “lost genius” of a once transcendent filmmaker. Make no mistake, I don’t think he has done anything post-Apocalypse Now that comes close to his four masterpieces of the 1970s, but I do still like Dracula the final installment of The Godfather trilogy, and even enjoyed his recent Tetro. Even so, it’s hard not to at least give thought to the “what might have been” scenarios in which he continued making truly great films into the next decade as some of his contemporaries did. Rather than dwelling on such hypothetical situations, though, I instead just return again and again (and again and again…) to my favorite Coppola works. I have yet to tire of The Godfather films. Apocalypse Now arguable trumps them all. The Conversation improves upon Antonioni’s intriguing original vision. For all of the mythology and hoopla that has come to surround his biggest productions - not to mention the seriously grating, conceited personality that he regularly displays - it is important to never forget how great a director Coppola can be.

The top three on my list are completely interchangeable, with any ordering being perfectly acceptable. For now, this is what I will stick with (even though during the 70s poll last year at Wonders in the Dark, I had Apocalypse Now as my #1 for the decade...)