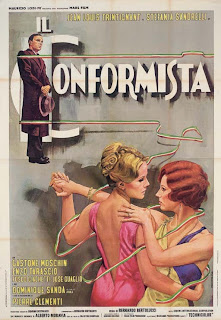 I have an interesting personal history with The Conformist and the unique path taken as it has become an all-time favorite. Long unavailable on Region 1 DVD in the United States, when I finally got a copy upon its long-awaited release, I was watching it based primarily on reputation. Outside of it being lauded as among the finest films ever made, I actually knew very little about it. I had a general outline of what the story would be about, but was in no way prepared for the way the story is told. And after my first viewing, I was appreciative of the cinematography and glad that I finally had the chance to see it, but outside of that I didn’t think that it would merit many subsequent viewings.

And then the strangest thing happened. As I went about my usual movie-watching for the next few days, moving down the list of the never-ending “need to watch” list, I couldn’t stop thinking about The Conformist. Something about it that was embedded in my mind made me revisit it and give it a second appraisal. Since then, as I’ve watched it a number of other times, my appreciation continues to grow. While it was the stunning photography that originally drew me in, I’ve now come to find the story fascinating, at times downright chilling, and one that holds up very well to multiple viewings.

In making this masterpiece at just 29 years of age, director Bernardo Bertolucci set expectations that he has unsuccessfully been trying to live up to ever since. He has certainly come close – I am definitely a fan of 1900 and The Last Emperor – but I feel confident in saying that The Conformist towers over his other works. Bertolucci was recommended Alberto Moravia’s 1951 novel by a girlfriend who had recently read it. However, being so busy on another film project, he never found the time to actually read Moravia’s original work. Amazingly enough, he went to a producer at Paramount and told him the story based solely upon the description of his girlfriend. The producer read the novel, approved the idea, and Bertolucci then set to work writing a screenplay for a novel that he had not properly read. Instead, he sat at a typewriter and essentially winged it, adapting and adding as he thought would best fit the screen. 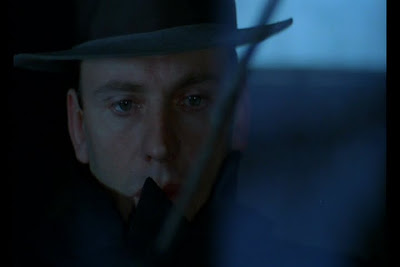 The result is a cerebral political thriller and a visual masterwork. The story follows Marcello Clerici (Jean-Louis Trintignant), who has an unmatched yearning to be the perfect “conformist.” He wants to be seen as a normal in every way – with women, with his sexuality, with friends, with the government, in everything that he does. In the 1930s Italy that is the setting of the movie, this means that Marcello has become determined to be seen as a dedicated follower of Mussolini’s Fascists. But true to the title of the film, he does not do this out of any great political or ideological convictions. Rather, he dedicates himself to the Fascists out of a desire to be seen as fitting in. Likely because of his malleable character, the Fascist leaders recognize the opportunity to use Marcello for their own purposes. His former college philosophy professor Quadri (Enzo Tarascio) is a leftist who has become a leader of exiled anti-Fascist. Now living in Paris, out of the reach of party leaders, it is decided to send Marcello to rekindle his acquaintance with Quadri and then kill him. Marcello takes his new bride Giulia (Stefania Sandrelli) with him to Paris and soon the couple is growing closer to Quadri and his wife Ana (Dominique Sanda). Marcello steadily grows more conflicted on whether he can go through with killing his former mentor, while at the same time finding himself becoming more and more attracted to Ana. Further complicating the situation is the fact that Giulia and Ana seem to be attracted to each other as well.

A series of flashbacks are interspersed throughout the narrative that could at times confuse an inattentive viewer, as it could be unclear exactly when an event is taking place. It is far from incomprehensible however, and the flashbacks are used brilliantly, as Bertolucci inserts them at key points that allow Marcello to reflect on past events before he embarks on serious affairs in the present. Through these various flashbacks, details about Marcello’s life reveal episodes that have shaped him into the compliant person that he has become. Most significant is his remembrance of a homosexual encounter he had as a child with a chauffeur named Lino (Pierre Clementi). Lino would lure young boys to his room and then engage in sexual acts, but in this case Marcello grabbed hold of a gun in the room and began firing. It is unclear whether he intentionally meant to harm Lino – but rather is just showing a childlike fascination with controlling a firearm – but in the process he hits the chauffeur with a shot. Believing he has killed the man, Marcello flees and is haunted by the memory of the entire episode for the rest of his life. 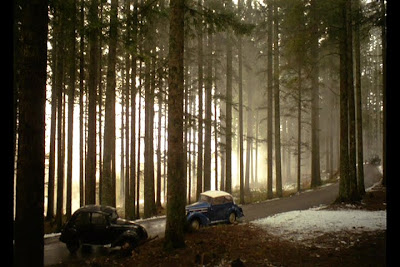 It amazes me now that at I was not at first all that interested in the story, which looking at it now is very interesting. The performance of Jean-Louis Trintignant is superb, making every struggle and indecision experienced by Marcello feel arduous and giving the political tale a very human facet. But if one does overlook the compelling nature of the story, it is understandable because the visuals are so overwhelming that they can easily overshadow any other aspect of the film. Bernardo Bertolucci and Vittorio Storaro are among the greatest of director-cinematographer duos, having worked together on a number of films – this, Last Tango in Paris, 1900, and The Last Emperor among others. This outdoes all other collaborations between the two, and probably outdoes anything else that Storaro has ever done. This is a very subjective statement, I know, and I love the work that he did on Apocalypse Now, but it just underscores how amazed I remain at the look created in this film. Were it not for the three most recent movies of Terrence Malick (with “recent” being a relative term whenever one is discussing Malick!), I would consider declaring The Conformist to be my favorite cinematography. 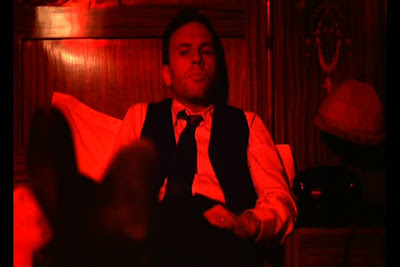 This is an achingly beautiful film, with Storaro managing to create an atmosphere that manages to be picturesque and simultaneously melancholy. The colors are muffled in their intensity but used with extraordinary taste. Just witness the opening moments with Marcello seated on a bed, waiting on a phone call, drenched in the red glow of a sign outside his hotel window. Or the gorgeous blues that surround Marcello and Ana as they try to fight their urge to get intimate. Storaro and Bertolucci combine to create scenes that have the power to haunt the viewer long after the film has ended. The sequence in the woods, with the frantic Ana banging on the car window for help as Marcello forces himself to ignore her is cinematic perfection. 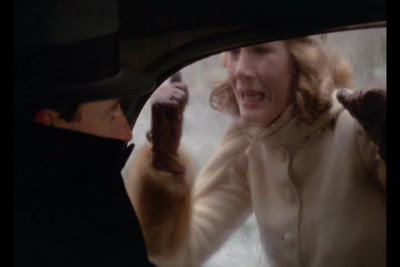 Other Contenders for 1970: Another outstanding year with a number of films that I really like. The strongest competition for me came from another gem from Jean-Pierre Melville, who very nearly took the top spot in three out of five years. While I don't consider Le Cercle Rouge to be quite as strong as Le Samourai or Army of Shadows, it's still a great film in its own right. Alain Delon played characters like this better than anyone else.

No other films really threatened to overtake either The Conformist or Le Cercle Rouge, but here are some other from this year that I really like: M*A*S*H* (Robert Altman); Patton (Franklin J. Schaffner), on the basis of the outstanding performance from George C. Scott; Woodstock (Michael Wadleigh); The Garden of the Finzi-Continis (Vittorio De Sica).
Posted by Dave at 9:01 AM