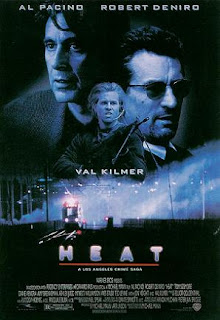 - “You do what you do, and I do what I gotta do. And now that we've been face to face, if I'm there and I gotta put you away, I won't like it. But I tell you, if it's between you and some poor bastard whose wife you're gonna turn into a widow… brother, you are going down.”

When the publicity machine was in full bore for the release of last year’s Righteous Kill, I was puzzled. Every commercial for it would play up the hype of Al Pacino and Robert De Niro finally working together, as if it was some revolutionary proposition. I could never figure out how the novelty of the duo could be expected to work so well when they had already gone “toe to toe” on-screen in Michael Mann’s Heat, and done so with spectacular results. The difference in the two efforts is like night and day. Righteous Kill saw the two icons recycling the same roles they had been picking up for over a decade, depending on their reputations to try and carry a subpar screenplay and film. Heat, on the other hand, shows two legends with the ability to take terrific writing and elevate it to another level.

There is sure to be debate on whether Heat qualifies as a crime masterpiece or just another run of the mill cops and robbers drama. Judging where I stand on the question is obvious considering that I have chosen it as the top film of 1995. That being said, I don’t deny that there are moments in Michael Mann’s otherwise solid screenplay that trade on tried and true clichés of the genre. But when the movie is good, it’s damn good, and the cast involved – not just Pacino and De Niro, but also Val Kilmer and Ashley Judd – give outstanding performances throughout.

Michael Mann had been battling for some time just to get Heat made. He used the general storyline of a cop and a professional thief meeting and declaring that they intended to the play the game out in their own way as the centerpiece of a screenplay he penned in the early 1980s. After not initially garnering much in the way of interest for a major motion picture, he instead reworked and shortened the script in order to use it for the 1989 TV movie entitled L.A. Takedown. Focusing only on the central story of the cat and mouse game between the cop and the thief, the story is like a barebones version of what he would eventually direct in 1995. Because of time constraints – the entire period allowed for pre-production and shooting was about a month – L.A. Takedown is half the length of Heat and includes none of the various subplots that are woven into the later film. After the success of 1992’s The Last of the Mohicans, Mann decided to revisit the original screenplay he had authored in the early 80s, before he cut it down to fit the TV format. With a major budget and full shooting schedule, Mann was able to produce the film he had originally intended. 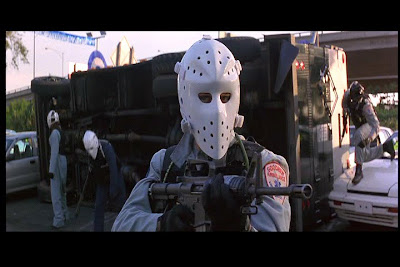 Pacino and De Niro are ideal choices as the two principals, playing a cop and a robber, both of whom are considered the best in their respective fields. De Niro is Neil McCauley, a world class thief who oversees a crew of crooks that make their living by pulling off major heists. These are not men who deal in petty cash and scores of swag. They deal in securities, jewelry, substantial sums of money. McCauley is fanatically committed to his work, leading a solitary life and living by this simple motto: “Don't let yourself get attached to anything you are not willing to walk out on in 30 seconds flat if you feel the heat around the corner.” His crew is also tight, with men like explosives expert and gunman Chris (Val Kilmer), wheelman Trejo (Danny Trejo) and loyal companion Tom Cheritto (Tom Sizemore). They work together, they hang together, they stick together. Things get complicated when they use an outsider on an armored truck heist. The man, Waingro (Kevin Gage), is a renegade who inexplicably begins gunning down workers on the truck rather than simply holding them at bay. When McCauley tries to take care of Waingro afterward, he manages to escape, leaving a major liability to the entire crew on the run.

Enter Pacino as Vincent Hanna, a lieutenant from the Robbery-Homicide Division of the LAPD. He is as fanatically devoted to his role as an officer as McCauley is to his line of work. Although not as solitary as McCauley, Hanna also leads a lonely existence as his work is his only true passion. After two failed marriages, he is giving it a go for a third time but his work habits create friction on the home front with his wife Justine (Diane Venora). Hanna takes over the case of the armored truck robbery, slowly inching his way closer to the previously unidentified group of thieves. As he begins uncovers information, a respect begins to develop between Hanna and McCauley. The surveillance and counter-surveillance performed by both cops and criminals becomes a game of each faction trying to one-up the other. When McCauley takes one final lucrative job, after which he plans to retire and run away with his new girlfriend Eady (Amy Brenneman), Hanna scrambles to make sure that his men are there to catch the crew in the act.

At three hours in length, there are a variety of supplementary characters and subplots. The relationship between Chris and his domineering wife Charlene (Ashley Judd) is always tumultuous due to Chris' gambling problem. Jon Voight and Tom Noonan play calculating professional underworld brokers. There are negotiations over stolen bonds between the McCauley crew and the original owner of the bonds, Roger Van Zant (William Fitchtner). A recently released ex-con (Dennis Haysbert) tries unsuccessfully to hold a steady job and lead a normal life, but is instead coaxed by McCauley into being the wheelman on the final job. There are many such ancillary plotlines, but the main focus of everything that happens is the back and forth between Hanna and McCauley, which in turn means a clash of the titans between the two most legendary actors of their era. 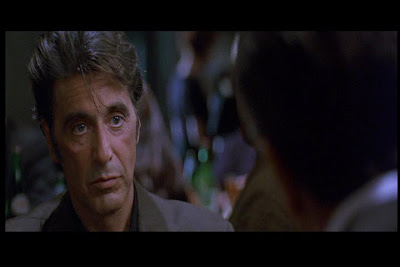 The diner scene, from which the quote at the beginning of this post comes, is a brilliantly intense event. Hanna invites McCauley to have a cop of coffee with him and the two sit down like old chums. They take innocent swipes at each other, pawing around the central issue of knowing that eventually the endgame of their entire relationship is likely to end in a shootout. The respect between the two professionals is obvious, but both have too much of an ego to allow the other to gain an upper hand. The speech between them is sharp, and both make it clear to the other that when push comes to shove, they will not hesitate to kill the other. Mann shot the scene by having one camera across the table from each actor and kept each camera on them the entire time. Pacino would reveal in later interviews that, as is usual with Michael Mann, they did countless number of takes, which is surprising considering how laid back and natural the entire scene feels. If this was the only moment in film history that the two ever appeared on screen together, I would be happy. It is like a perfect cap to their work together, which is all the more reason that I wish Righteous Kill had never been made - I just want to remember this as their final collaborative statement. 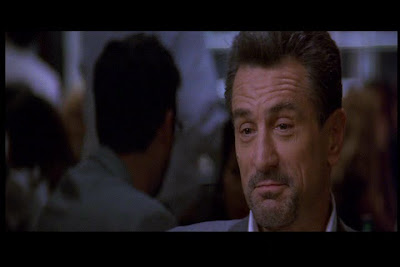 As has come to be expected of Mann, the movie contains some impeccable action sequences. Working with cinematographer Dante Spinotti – who, as a side note, has a surprisingly impressive list of films to his credit – there are quite a few scenes that are among the best you’ll find in crime films. The opening armored truck heist is great. So too is when Hanna and his cops believe that they are spying on a secret meeting of the crew, only to find out that McCauley is actually manipulating them out into the open so that he can get pictures of them for himself. And the shootout during the final robbery, with Val Kilmer calmly walking out of a Los Angeles bank with an automatic rifle and spotting the cops, is exhilarating.

I said earlier that the movie was not without its faults, so it’s only fair that I point out some of the minor things that have always bothered me. There are some crime caper clichés, such as the ex-con that is trying to go good but is forced back into crime by an overbearing boss. Things like that just seem too pat, but fortunately they are minor factors in the overall story. Likewise, the angle concerning McCauley and his new girlfriend Eady can come across as very forced. I understand why the inclusion of such a relationship is necessary – the idea of being able to walk away from anything as soon as you feel the heat is central to the entire story. It’s just that there are times when the dynamic between the two just doesn’t feel very believable. And in all honesty, even I am sometimes annoyed at the antics of Pacino as Hanna. Perhaps that is what the character calls for, but it can be a bit too much.

In the end, considering my tastes, perhaps this is a movie that was simply tailor-made for someone like me. I’ll definitely be interested to see how others rate it. At its finest moments, I think it’s as good as anything done in crime movies in quite some time. And while it might not quite be my favorite Michael Mann film (that honor actually belongs to The Last of the Mohicans), it is quite easily my #1 of 1995.

Other Contenders for 1995: This is another year that for me has a lot of very good films, but lacks the great films that are found throughout so many other years of the 1990s. All of my nearlies are ones I really enjoy, but none that I would likely consider the best of any year. The closest of the bunch is probably Jim Jarmusch’s unique western Dead Man. It’s an always fascinating take on the genre and a movie that keeps you thinking long after it ends. I also really like Martin Scorsese’s Casino, but don’t think it’s near the level of Scorsese’s true gangster masterpiece Goodfellas. Oliver Stone’s Nixon doesn’t approach the same power as JFK, but it’s still an interesting mix of politics and mystery. Others that I like: Se7en (David Fincher), Braveheart (Mel Gibson), Le Ceremonie (Claude Chabrol), and Apollo 13 (Ron Howard).

One movie that I am surprisingly not a big fan of, but that most would expect me to like, is Bryan Singer’s The Usual Suspects. It has never really worked for me.
Posted by Dave at 12:05 AM