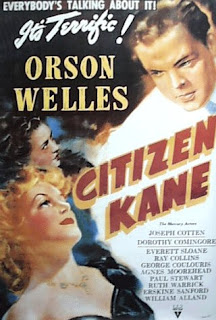 What can I possibly write about Citizen Kane that has not already been repeated ad nauseum for the last sixty plus years? It surely must be the most analyzed and interpreted film in the history of cinema – from the script, to the acting, to the photography, to the editing. Everything, scrutinized to the smallest detail. In fact, the monumental reputation that the film has acquired sometimes even turns off many film fans, creating something of a backlash against a film that is _continually_ chosen as the greatest film ever made. I can still remember watching it for the first time, wondering if this movie could possibly be as good as my other favorite “classic” films – movies like Casablanca and On the Waterfront, which were among the first that I dared to watch. Everyone told me that it was a highly influential film, but that it was not nearly as enjoyable a viewing experience as other classics. Some even referred it as boring.

Yet as I watched it for the first time, I was completely enthralled. And it had nothing to do with the technical innovations or the revolutionary photography. It was just the story. It was witnessing the rise and fall of Charles Foster Kane, a publishing tycoon who soon lusts for something greater than increasing circulation. It may not have instantly become my all-time favorite movie, but I could understand why it was lauded by so many others. 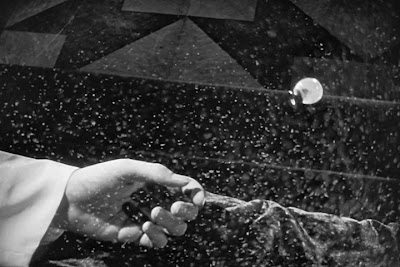 This is the thing that has always amazed me about the status of Citizen Kane. Whenever the film is discussed, the many innovation that were pioneered or came into prominence with this film are immediately cited as the reason the film is so cherished. To be sure, technical wizardry abounds. Exactly who is to be credited for the amazing photography is debated to this day, but suffice it to say that cinematographer Gregg Toland deserves at least as much praise as Orson Welles. Toland is generally credited with the extensive use of deep focus that is used throughout the film. The storytelling is novel, as Welles is able to create unique ways to compress large chunks of time into a matter of moments. In one section of the film, the span of a single sentence fast forwards the story decades without making the audience feel they have missed a beat. Using flashbacks to recount the life of Kane, Welles is able to do so as effectively as I have ever seen the storytelling device utilized. 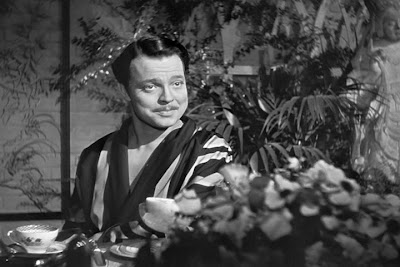 But as cutting edge as the filmmaking is, and as much as it would influence later generations of directors, I have always thought that concentrating solely upon the technical chops of the film overlooks what a great story it is. It is thoroughly entertaining. Watching the rise of Charles Kane, making his mark on the world during a fascinating time in American history is captivating. For me, I think that this immediate connection is a direct result of the greatness of Welles the actor, not necessarily the director. His portrayal of Kane always contains a hint of uncertainty. Here is a man that is obviously ambitious, with a drive to achieve great things, and yet as he continually does so he becomes uninterested and must move on to something else. What is his endgame? What is it that he is so ruthlessly motivated to accomplish? I don’t know the answer to these questions, and Welles is able to convey the fact that Kane himself doesn’t seem to know either.

It’s the fascination with Welles’ performance and the Kane character that made it impossible for me to pick against Citizen Kane. There were other great films that made the decision tough – getting reacquainted with the spectacular pair of films that Preston Sturges released this year made it hard to fathom not picking at least one of them for this countdown. The cast of Bogart, Astor, Lorre, and Greenstreet makes The Maltese Falcon an amusing adventure every time that I watch it. But re-watching Citizen Kane reminded me what an all-around virtuoso performance this film was for boy wonder Orson Welles. To think that at age 25 he wrote, directed, produced and starred in this movie – which just so happened to be his debut film – is still mind-boggling. 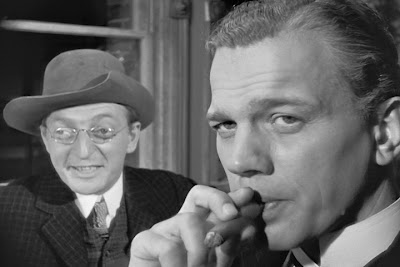 I’d be remiss if I didn’t also mention some of the superb supporting performances. Joseph Cotton is another actor that no matter what the strength of the material always turns in a convincing and engaging performance. He is great as Kane’s longtime friend and sidekick Jedediah, be it in the flashbacks as a young man or under heavy makeup playing the aging Mr. Leland. Everett Sloane is endearing as Mr. Bernstein, the always-loyal assistant to Mr. Kane. He sticks with Kane through it all, as difficult as that often is with the turbulent disposition of the publisher.

As hard as it is to do, approaching Citizen Kane as just another movie, to be appreciated solely on its own merit, only reinforces what a terrific film it is. There is a reason that this is now a cliché selection among greatest films lists and all-time favorites – it’s simply that good.

Rating: 9/10 (again, just based on personal enjoyment… it’s fairly obvious what a “greatness” rating would be)

Other Contenders for 1941: The incredible year that Preston Sturges had in 1941 is truly astounding. I can think of few instances of a director releasing two films on the level of The Lady Eve and Sullivan’s Travels in the same calendar year. Sturges is another director that just puts a smile on my face from the beginning to the end of his films. If forced to choose between the two films, I would say that I slightly favor The Lady Eve – I just love Barbara Stanwyck’s performance. The scene where she and her father are doing card mechanic moves back and forth in the game with Henry Fonda is brilliant. But ask me the same question again in a few hours and I might then prefer Sullivan’s Travels!

Being a film noir fanatic, I always enjoy watching John Huston’s The Maltese Falcon. That trio of Bogart, Lorre and Greenstreet never disappoints. High Sierra, directed by Raoul Walsh, reinforces the fact that Walsh was among the masters directing gangster and action films. John Ford’s How Green Was My Valley took home Best Picture honors this year and I think that it is a fine film, if not as enjoyable as others I have mentioned.
Posted by Dave at 8:52 AM