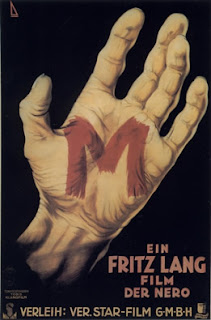 Released nearly 80 years ago, Fritz Lang’s first foray into talking films is every bit as thrilling as it surely must have been upon its premiere. It is rightfully viewed as the granddaddy of all of the serial killer films that have been made since, but few have even approached the heights reached by this 1931 masterpiece. While Lang skillfully explores the psyche of a seemingly average man who impulsively kills, and the circumstances that have driven him to murder, he manages to navigate his film into territory that its successors never effectively manage. To be sure, M is the story of a serial killer. But the true strength of the film, and what separates it from so many imitators, lies in Lang’s ability to construct an authentic city that is palpably stricken by terror. He allows the audience to witness how different segments of this society – rich and poor, underworld and upper, legal and illegal – respond to this fear and how each attempt to solve the mystery.

Fritz Lang was already a critically-acclaimed director, having made some of the most celebrated silent films of the 1920s. Even now many of his early silents such as Metropolis, Dr. Mabuse the Gambler, and Spies are still considered among the best work in the history of German cinema. Metropolis is even mentioned among the greatest films ever made. After making just two films in his homeland in the 1930s (this and 1933’s The Testament of Dr. Mabuse), Lang would move onto a highly successful career in Hollywood that lasted twenty years and produced classics such as Scarlet Street and The Big Heat. But it is very hard to refute the claim that with M, Lang reached his artistic zenith. It is an exquisite combination of his technical skill and masterly storytelling.

The story is as straightforward as it is chilling. Young girls are going missing in Berlin, creating paranoia through every level of society. The opening scene encapsulates this feeling, as it shows a group of schoolchildren playing a game involving a song about a nasty man who will come and chop them up. The children seem oblivious to the danger, but the fear of the adults is illustrated by a nearby woman scolding them for singing such a song. Very early in the film, we see the killer’s mode of operation, as he approaches a young girl walking home from school. He woos young Elsie Beckmann by complimenting her on the ball that she is playing with and buying her a balloon. When Elsie still has not returned home hours later, her mother becomes frantic. It is in these sequences that Lang demonstrates how he can unnerve an audience without showing a single act of violence. When he shoots Elsie’s ball coming to rest in the dirt and her recently purchased balloon floating into power lines, the message is clear: the killer has claimed another victim.

The murders naturally become the top priority of the police, who have thus far been unable to track the perpetrator. The film incorporates investigative technology that at the time of release would have been seen as quite innovative – procedures such as analyzing notes that the killer has written in hopes of gleaning any useful information or comparing fingerprints. Led by Inspector Karl Lohmann (Otto Wernicke), the police begin to stage full-scale raids on all known underworld establishments. In the hopes of shaking things up and possibly getting someone to talk, the police begin rounding up all known criminals and questioning anyone found in these raided establishments. While the raids fail to turn up the killer, they seriously disturb the business of the underworld. Unable to operate as freely as before, many top criminals in Berlin come together to discuss what can be done about the situation. Realizing that the raids will continue so long as the killer is at large, the gangsters decide to deal with the matter themselves. Under the leadership of gang leader Schränker (Gustaf Gründgens), the hoodlums unleash the full machinery of the underworld, including a beggar’s organization to gather intelligence, in hopes of catching the killer and quickly disposing of him. 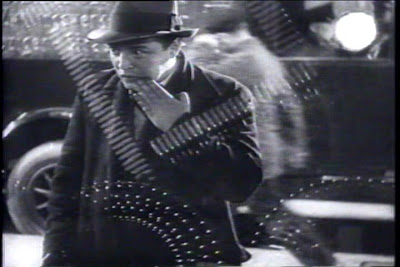 Thus, the race is on between the police and the underworld to see who can track the killer fastest. The suspense of the film is entirely the result of this chase, as the identity of the serial killer really is not a mystery. Hans Beckert (Peter Lorre) is seen via his shadow and in profile early in the film with the abduction of Elsie. Less than midway through, there is a perfectly clear shot of Beckert staring at himself in a mirror as he awkwardly contorts his face with his hands. For such an iconic performance, Lorre’s on-screen time is actually sparse. But the reason that the character is so well-remembered is that Lorre makes this limited time count. While it would be a stretch to say that he induces sympathy, what Lorre is able to do is to make the audience at least question why Beckert does such terrible things. Through Lorre’s expressions and body language, we see the anguish that Beckert goes through at the mere sight of a young girl. It appears that he is fighting himself not to act on the urge, but that he simply cannot overcome it. The actions are still reprehensible, but Lorre is able to get the viewer to root for him to at least resist the horrible urge. 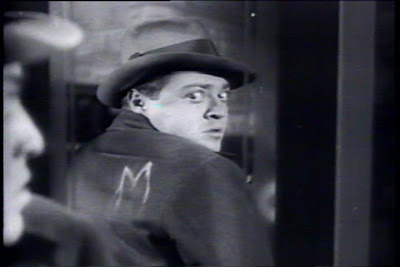 The underworld is ultimately the pursuer that catches the killer following an exciting chase in which they are able to track Beckert due to a large chalk “M” being placed on the back of his coat by a local vendor. Realizing that he is about to be convicted before a kangaroo court, Beckert makes an impassioned plea for his life, arguing that he has no control over his urges. It not only might be Lorre’s shining moment in this film, but the shining moment of his entire career.

I’m obviously on record as declaring that I think this is the best film that Fritz Lang ever made. Aside from the compelling plot, it is just an absolutely showcase for all of Lang’s talents as a director. The man could create atmosphere better than anyone. As I said at the beginning of the article, the true strength of the film is in how Lang portrays the response from diverse levels of society. The lower class must continue to go about their routine, working and hoping to avoid the killer. As one of the washerwomen in the first scenes remarks, they only want to be able to hear the voices of their children to know that they are safe. The affluent, meanwhile are more proactive, as Lang demonstrates by showing them waiting outside the school with cars to pick up their children. Both are equally terrified. There is a great scene in which a man innocently approaches a girl on the street and is mistaken for the killer. He did nothing more than speak to the child, but the public became so anxious to apprehend someone that they immediately jump to conclusions and attack.

The parallels between the police and hoodlums are even more fascinating. The police are frantic, trying to figure out ways to develop any clues that could lead to the killer. The gangsters, men who specialize in vice, assert that a man who targets children is despicable even to them – as Schränker declares, “We are not on the level of this murderer.” Both groups want nothing more than to have this man off the street. My favorite sequence in the entire film shows Lang to be a master of editing. He shows both the gangsters and the police engaged in conferences to determine how to go about getting rid of the child murderer. Lang seamlessly cuts back and forth between the two conclaves, sometimes even in mid-sentence, as Inspector Groeber (Theodore Loos) finishes a thought begun by the gangster Schränker. He alternates between suggestions by law enforcement on how to catch the criminal and those from the hoodlums who have the same goal. There are no overly technical tricks involved, just astute editing, but it’s an incredibly fresh way to show the action.

The other thing that struck me is how effectively Lang was able to utilize sound. This was his first film with sound and he wisely used it very efficiently. It is not bogged down by too much dialog. And he used key sounds such as Beckert’s whistling of “In the Hall of the Mountain King” to play an integral part in the direction of the story.

For a film dealing with such weighty issues and despicable crimes, this is one that is surprisingly entertaining to watch. The reason is that it is a joy to see a master like Lang at work. He is in complete control throughout the entire film.

Other Contenders for 1931: I have to admit that there wasn’t much hesitation in making my choice for 1931. It was very clear that this would be my selection. But the ease was the result of M being such a great film, not due to lack of contenders. The seminal gangster film Little Caesar (Mervyn LeRoy) is outstanding and features Edward G. Robinson’s breakout performance as Rico Bandello. Some list Little Caesar as being from 1930, but its official release date was 1931 from every source that I've seen. I’ve previously reviewed The Public Enemy (William A. Wellman) and love Jimmy Cagney as Tom Powers. But the strongest challenge – and the film that I suspect most would choose for 1931 – came from Charlie Chaplin’s City Lights. It’s not my personal favorite Chaplin film (that one will be included later in this countdown), but its greatness is undeniable.
Posted by Dave at 7:35 AM