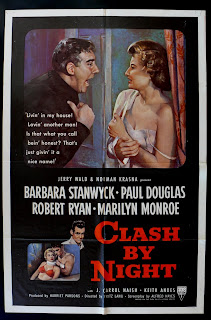 - “Listen to me, blondie. The woman I marry, she don't take me on a wait and see basis. I ain't a dress she's bringin' home from the store to see if it fits and if it don't, back it goes. In my book marriage is a two-way proposition - you're just as much responsible as I am. So, that little eye is gonna roam... if what you think is Joe's alright until somethin' better comes along... honey, you better take another streetcar.”

A fitting film for Valentine's Day, no? (If you could see my face now, you would see a sly grin...)

At any rate, I have the same reaction to Fritz Lang’s Clash by Night almost every time I watch it. I tend to come away from each viewing with a positive memory of the film, meaning that each time I re-watch it I go in with the idea that it is undoubtedly among the best American films Lang ever made. Then, about midway through, I start to wonder what kind of fumes I’ve been sniffing, as I start to question how I could be placing this in company with Scarlet Street and The Big Heat. And then, with about 30 minutes to go in the film, I do yet another about-face and return to my original position that Clash by Night really is outstanding work from a master. Its placement in the countdown should make clear that my ultimate judgment comes down closer to masterwork than middling, but I stop a bit short of classifying it as top-flight Lang. As strong as that final half hour is, I have to admit to finding myself wandering at times through the middle.

But… Wow, what a potent conclusion, like a runaway train that you’re watching steaming straight for the end of the tracks. It might not actually go completely over that edge, but it comes distressingly close. 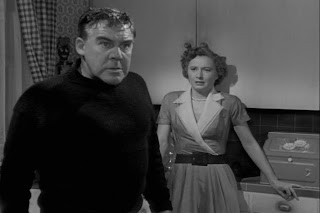 This is yet another noir based on a play, this time with the source material being written by the great Clifford Odets, who himself would write a few classic Hollywood screenplays. The storyline is deceptively simple: Mae Doyle (Barbara Stanwyck) returns to her hometown fishing village after a failed marriage in the big city, staying with her brother Joe (Keith Andes) and his fiancée Peggy (Marilyn Monroe). World weary and cynical, Mae surprisingly falls for naïve fishing boat owner Jerry D’Amato (Paul Douglas). The two are married, have a child, and appear to living the ideal small town life. But that façade is shattered when Mae shockingly becomes involved in an affair with Jerry’s longtime friend – and sometimes patronizing companion – Earl (Robert Ryan). Having been a softy his entire life, akin to a big lovable teddy bear, Jerry suddenly snaps when he learns of the affair. Fearing he might due something awful, such as kill Earl, he opts instead to leave with his child.

The themes and implications of the film have been written about by far more astute analysts and scholars than me. For a great analysis, I’ll go ahead and direct people to a review from Tony D’Ambra at FilmsNoir.net. Tony is spot on in his reading of the themes, particularly regarding the finale. Clash by Night is, most of all, about redemption, particularly for Mae. Again, check out Tony’s review, as any further analysis by me would mirror the thoughts that he has already penned. 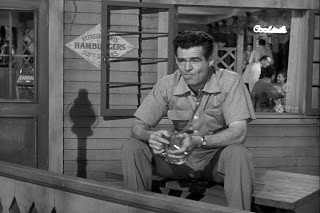 Instead, I just have some general observations that came to me while watching this for the third or fourth time (I’m not sure which). First, it validated the theory I put forth in the entry for On Dangerous Ground, where I wondered if maybe my lukewarm feelings toward Robert Ryan are more a reflection of the characters he played than antipathy toward him as an actor. Earl Pfeiffer is a movie character that I genuinely hate. Even before the affair is revealed, he’s the kind of guy that comes off as absolutely insufferable – always complaining, throwing out backhanded compliments with a smug smile on his face. I know that there are noir villains who do much worse things than him – the usual murders and whatnot that populate noir – but I can’t think of a single one I dislike more than Earl Pfeiffer. Second, that short monologue that is at the beginning of this article is one of great slices of dialog I’ve yet come across. It’s delivered by Joe Doyle (Keith Andes) to Peggy (Marilyn Monroe) right after Mae has left to run off with Earl. Perfectly written, perfectly delivered, it makes an otherwise routine performance from Keith Andes stick out to me. Third, and finally, if anyone needed any further proof that Marilyn Monroe could act, I think that her supporting, albeit minor, performance here should do the job.

The bona fides of Lang and cinematographer Nicholas Musuraca are known by everyone reading this, so there really is little need go into detail on their work. I will just acknowledge that they capture the feel of a small fishing town quite well, particularly in the opening sequences of the film. You really get the sense that everything in the town centers on fishing, canning, and everything that goes with it, contributing a unique atmosphere.
Posted by Dave at 12:05 AM