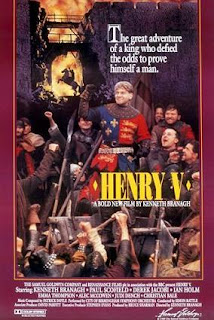 - “And Crispin Crispian shall ne'er go by from this day until the ending of the world but we in it shall be remembered. We few, we happy few, we band of brothers”

Here is yet another of those interesting quirks to arise in an annual countdown. It should be obvious to anyone following that I really like Woody Allen. With that being the case, it is no great surprise that two of his films have already been selected – Annie Hall in 1977 and Hannah and Her Sisters in 1986. They’re both masterpieces in my opinion and certainly deserve the recognition of being the best of their respective years. The thing that makes me laugh is realizing that they are going to make the countdown, whereas my favorite movie that Woody ever made is going to finish an oh-so-close runner-up this year. I love Crimes and Misdemeanors. I placed it in the top 10 of my ballot at the Wonders in the Dark decade poll, have considered it my favorite Woody since the first time I saw it, and until very recently it would have been a slam dunk as my #1 of 1989. But at the start my recent “Shakespeare on film” kick that I began a few months ago, I bought a copy of Kenneth Branagh’s Henry V. And… here we are. The result of that viewing experience should be pretty obvious by the selection that I made.

In my opinion, there is probably no better source material for one to draw upon than Williams Shakespeare’s Henry V. As someone who is only recently rediscovering the works of the Bard, after having no particular attraction while a high school student, I would likely name it my favorite of his works. My reasoning? It’s the kind of emotionally rousing patriotic work that I would expect for something dealing with this subject. I love when someone has the skill to craft stirring, spine-tingling moments such as the legendary St. Crispin’s day speech. I eat that kind of stuff up. Call me a sucker, but I especially want historical epics like this to be rousing and inspiring. Shakespeare’s Henry V is most certainly that and Branagh emphasizes this throughout his interpretation. 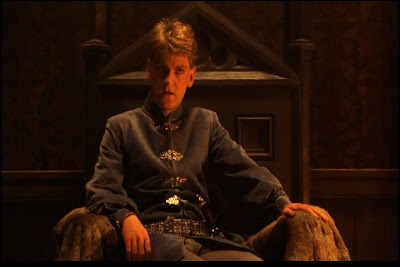 I’m guessing that most are at least passingly familiar with the story, so I won’t spend a great amount of time in synopsis. For those who need a refresher, the story follows English King Henry V who lays claim to certain districts in Normandy. The French do not recognize such authority and Henry decides to embark on a campaign in order to solidify his claim to the territories. In the process of preparing for the expedition, Henry is able to uncover a conspiracy against him and continue on with his plans. After landing in France, the English army begins to fight its way across the country, slopping through the muck and filth created by an army on the move, capturing towns along the way. Their path eventually leads the army to the Battle of Agincourt, badly outnumbered by the French and facing expected destruction. Instead, the great leader Henry manages to deliver a rousing speech that pushes his men into action and an improbable victory.

OK, so there is the Cliff Notes version. As usual, I just want to highlight the things that stand for me and why this film is elevated above nearly any other cinematic Shakespeare interpretation. Henry V had been made for the screen before, most notably by Laurence Olivier in 1944. Olivier was a tour de force in that instance – he wrote, directed, produced and starred in the film and was honored with a Special Achievement Oscar at the Academy Awards. In fact, Olivier’s version is often cited as being the finest Shakespeare film to ever be made. Thanks to a friend and fellow blogger, I’ve seen it and agree that it’s outstanding. It’s a patriotic epic and one that certainly deserved to be made in war-ravaged 1944 England. The thing that keeps me from ranking it quite as high as Branagh’s version is that I still am fully aware of the fact that I am watching a play that has been transitioned to the big screen. This is not necessarily a bad thing, so I am not arguing that it in any way detracts from Olivier’s film. But the reason that I like Branagh’s version so much (and why I rate Kozintsev’s Hamlet so high) is the fact that it fully embraces the fact that a film is being made. Aside from the role of Derek Jacobi as the chorus, the rest of the film feels nothing like something that would traditionally be tailored to the stage.

At times – and by this I primarily mean the battle sequences – it feels like something that could have been made by Akira Kurosawa. Recognizing that he has many more possibilities in film versus the stage, Branagh also makes great use of flashbacks. There are key sequences throughout where Branagh has Henry flashbacks to his earlier days as the rabblerousing Prince Hal. These are actually scenes taken from earlier Shakespeare plays, but they are important in understanding the character of the King. In these snippets, we see Henry (Kenneth Branagh) cavorting with colorful characters as Sir John Falstaff (Robbie Coltrane), Nym (Geoffrey Hutchings), Bardolph (Richard Briers), and Pistol (Robert Stephens). Sequences like these only reinforce the anguish that Henry sometimes feels in trying to live up to his new kingly image. One need only watch the sequence in which Bardolph is hanged as a thief to know exactly what I am talking about. As Henry sees his old friend about to be executed, he reminisces back to these earlier, happier days when Bardolph jokingly asked the future king not to hang an old thief like him. With tears welling in his eyes, the King nods to give the go-ahead, feeling it is something that he has to do as the monarch. The same is true of his rejection of his former mentor Falstaff. He seems to look back on those times fondly, yet still feel that he has to completely disregard them now that he is now longer the wild Prince Hal. 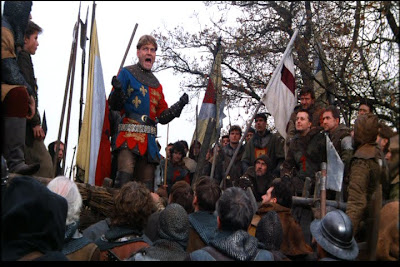 This aspect of Branagh’s performance as Henry is important I think and is why I feel that the flashbacks are so vital. Henry is undoubtedly our hero in this story, but the way that Shakespeare, and by extension Branagh, tell it allows the viewer to make their own overall assessment of the man. He is quite clearly a great leader of men and a brilliant military commander. But in situations such as his completely spurning of his former friends, he is less than attractive. Whether or not his new status as king warrants such a reversal is irrelevant in my eyes – few things look worse than turning your back on close friends. And we see the results of these choices – Falstaff supposedly dies of a broken heart after being banished by Henry. So in Branagh’s King Henry we see a man who is at times likable, at others petty, but the fact that we’re given the full portrait is what appeals to me. This is as much a compliment to Shakespeare as Branagh, but I think that the young actor’s performance helps contribute to this feeling as well.

Then, probably most important for me, are those “rousing and inspiring” moments that I referred to earlier. There are many of them here. We have Henry exhorting his men to charge the walls of Harfleur and break the siege. He calls men out by name, asking them if they will follow him. Then there is the previously mentioned St. Crispin’s day speech. Let’s be honest: it’s some of the most moving lines I’ve ever read, so a majority of the credit should go to good ol’ Billy. But Branagh delivers it superbly, set to equally uplifting music, and it has quite the effect. The small snippet that I have at the beginning of this post are just perfection, particularly this particular line – “We few, we happy few, we band of brothers.” And then possibly the most moving sequence in the entire film comes after the Battle of Agincourt, as King Henry carries the body of the slain boy (Christian Bale) who was helping with the supplies in the rear. As Henry takes the boy over his shoulder and carries him through the carnage that lays throughout the battlefield, the strains of the Latin hymn Non Nobis Domine almost become overwhelming. 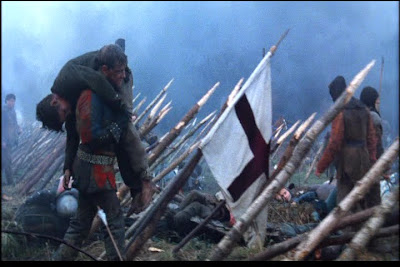 I’m in no way saying that this is the be-all and end-all of Shakespeare on film. I wouldn’t necessarily argue with anyone that prefers Olivier’s version. But it has gone far for me in further appreciating those that take on the heavy task of bring his works to the screen. The impact it had on me was major – it even went so far as to strengthen my appreciation of Orson Welles’ acclaimed Chimes at Midnight, as it put into context many of the events taking place in the Welles film. Now, knowing what would eventually come of the friendship, I can better appreciate Welles’ portrayal of Falstaff. This is just an all-around great film, and I did not even delve into the great support performances peppered throughout it. Kenneth Branagh was not even 30 years old when he directed and starred in this film, which is impressive in and of itself. Sadly, I’ll be very surprised if he is ever able to match it again in the remainder of his career. If he does, it’ll have to be near magical.

Other Contenders for 1989: I’ve already declared my top runner-up, with Crimes and Misdemeanors losing in a photo finish. It’s my favorite Woody Allen film, containing a great mix of comedy and serious drama, while maintaining the same philosophical questioning that are common through Allen’s films. I also have to admit that I have long had a love of Indiana Jones and the Last Crusade. Many people feel that all sequels in the Indiana Jones trilogy are frivolous, but I think this is one is entertaining. Maybe a bit of nostalgia for me in regards to it, but I still love it. Others that I think are very good from this year: Field of Dreams (Phil Alden Robinson) and Drugstore Cowboy (Gus Van Sant). There are some oversights for me in this year. Even though someone has given me the ability to watch Peter Greenway’s The Cook, the Thief, His Wife and Her Lover, I simply did not get to it in time. And I also did not have time to begin marching my way through Kieslowski’s The Decalogue. Significant oversights on my part, I know, but it is what it is.

Two commonly cited favorites for this year that I do not care for are Spike Lee’s Do the Right Thing and Oliver Stone’s Born on the Fourth of July. Neither of them have ever been able to grab me.
Posted by Dave at 12:08 AM