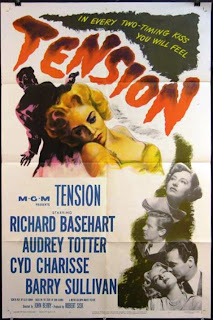 I’ll start this review with an admission, or perhaps acknowledgment is the better term, concerning some of the noirs of this era, some of which will be found in this countdown. In a few of them, there comes a time when a plot detail either has to be accepted or dismissed – something that is potentially so over the top, that you either accept it and go on to enjoy the movie as it progresses or that you see as so outlandish that it spoils whatever else happens. John Berry’s Tension is a case in point. The key point to the entire film is that Warren Quimby (Richard Basehart), a mild-mannered pharmacist, plans to adopt an alter ego and use this new character to murder his wife’s lover. The new “person” looks kind of different, with a changed hairstyle and no glasses. Still, to be completely honest, this hidden identity angle is tough to digest, seeming too implausible to believe. I would imagine that based on this point alone, many viewers would be turned off from the entire film. And this would be a shame, because once you get past it, a good little drama unfolds. 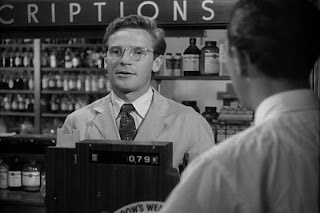 I understand that it’s asking a lot to just overlook such a major plot point, but I honestly didn’t have much of a problem doing so – primarily because the performance from Audrey Totter was so strong that I wanted to see how she would manipulate the entire situation. Totter plays Claire Quimby, the wife of the gullible pharmacist Warren (Richard Basehart). She is obviously promiscuous, routinely meeting her dates just outside the pharmacy that her husband manages. Totter’s Claire is a ruthless femme fatale. Berry, working with Rivkin’s screenplay, gives only enough background on Claire to make her all the more shadowy, hinting that at one time before the marriage she may have operated outside the law. Watching the early scenes of Claire meeting men at the lunch counter of the pharmacy, the impression I got was that she is operating much as a prostitute would have done. Obviously, with the Hays Code in full effect, such information would not have been made explicitly clear, but I don’t think it’s a stretch to make that assumption. 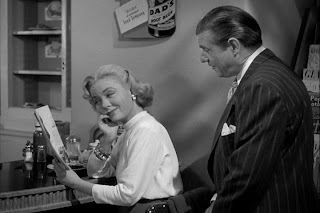 It’s a testament to Berry that the movie remains at all interesting. It is sometimes billed as a thriller, but the tension builds very slowly. Rather than moving quickly toward the planned murder, Quimby’s off the wall plotting proceeds leisurely toward the conclusion. Along the way, he meets an innocent photographer named Mary Chanler, played by the absolutely stunning Cyd Charisse, and begins dating her as his Paul Sothern persona. Despite the lack of action, things remain interesting due to (besides Totter) the combination of Berry’s camera work and the alluring score from Andre Previn. It’s nothing overly flashy, but it’s enough to draw you in. Previn’s music is melodramatic throughout, particularly with the constant strains of a saxophone playing whenever Claire is on-screen. Perhaps even this element could be perceived as too over-the-top, but it adds to feeling of melancholy that seems to accompany every relationship Claire is involved in.

Director John Berry was another unfortunate casualty of the House Un-American Activities Committee. When friend Edward Dmytryk decided to testify before the HUAC in 1951, Berry was one of the names he gave up as being a communist in Hollywood. After entering the dreaded blacklist, Berry opted to leave the United States and move his family to Paris. He directed a number of films in France, also became involved in theater productions throughout Europe, but his career in Hollywood would never be resurrected.
Posted by Dave at 12:05 AM