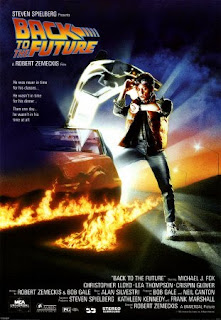 Yes, I did just name this the #1 film of 1985. In fact, at the Wonders in the Dark 1980s poll, I went a step further and ranked it as my #2 film in the entire decade. And as I said when making the post of my list, I was very tempted to put it at #1 over Raging Bull. That’s how much I like this movie. I understand that these are bold statements to make about a film that is an unabashed attempt at a summer blockbuster and that many serious film critics and movie fans will dismiss as simply light entertainment. It is not accepted as being part of the cannon of great American films as some others in this decade already are. I don’t care. I think that it is a genuinely great film and am not at all ashamed to be ranking it this high, placing it in the same company as critical darlings and personal favorites like Raging Bull, Once Upon a Time in America and other great films of the 80s.

I’m sure many will laugh at this pick or at the very least chuckle at the passion of that opening paragraph, but that’s why I do this stuff. I think that a lot of people that read this will at least agree that this is an entertaining ride, but I don’t know how many will hop on the bandwagon of calling this a legitimately _great_ movie. I could sugarcoat things a bit and not step out on such a limb, but that’s no fun – and since everyone who frequents the blog knows how strongly I feel about my favorites, it’s just not something I would do. In my mind this is the modern equivalent of a Preston Sturges comedy (or Frank Capra for those that prefer his work). The kind movie that might occasionally drift into sentimental territory, but that is so smartly written and acted that it manages to always remain fresh. 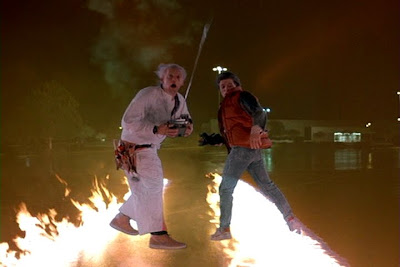 This is another instance where plot synopsis is probably superfluous, but I’ll give a quick one anyway. In fact, the story is actually a lot simpler than you would think. Teenager Marty McFly (Michael J. Fox), growing up in 1985, goes to meet his eccentric friend and inventor Doc Brown (Christopher Lloyd). A rich scientist, Doc is constantly coming up with zany inventions that never pan out and this time he claims to have converted a DeLorean into a time machine. Running on stolen plutonium, the contraption miraculously works and results in Marty being transported back to 1955. Once in 1955, he inadvertently interrupts the meeting of his parents, creating problems as they are no longer on track to fall in love and start their family. Instead of falling in love with his father George (Crispin Glover), his mother Lorraine (Lea Thompson) instead has the hots for Marty. This endangers Marty’s very existence and forces him to begin to play matchmaker for his own parents. His mission then becomes to fix his parents up, see that they fall in love, and then find a way back to 1985.

It doesn’t sound like the plot line of a movie considered to be an all-time great, does it? I’m sure that the outlandishness of the entire thing will make certain that any chance it ever had at seriously being thought of as great movie (which I doubt ever even existed) will be killed just on that basis. Fortunately, art is not like sports where winners and losers must be declared. The efforts of those involved in this movie and the entire series can still be properly acknowledged. The screenplay by director Robert Zemeckis and Bob Gale is very impressive, displaying incredible foresight in how they would manage to juggle the various alterations that would have to be made to accommodate the time travel over the course of the entire trilogy. By this, I’m referring to very small elements – things such as 1985’s Twin Pines Mall becoming the Lone Pine Mall, because when Marty was transported back to 1955 he inadvertently knocked out one of the trees with the DeLorean. When he makes it back to the 80s, we just happen to catch a glimpse of the sign that shows the new name. Minor details such as this are spread throughout all three films and even someone who doesn’t like them has to at least acknowledge the creative planning that went into scripting them. 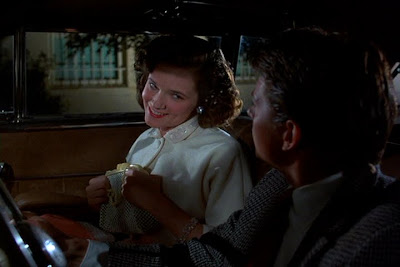 It is also incredibly charming the way that they poke fun at the cultural differences between 1955 and 1985. The way that they show how drastically viewpoints can change over the course of a few years, and how what seemed outlandish in one era is perfectly normal in another. Just witness things like the 1955 Doc refusing to believe that the president in 1985 is Ronald Reagan. “The actor!” Doc exclaims when he hears this, and then follows up by asking, “Then who’s vice-president? Jerry Lewis?” Or the man at the diner laughing at the notion of a black man becoming mayor of the city. But the audience is in on the joke, as we already know that the black man working at the diner is Goldie Wilson, the mayor in 1985 Hill Valley. Or how in 1985 Marty’s mother expounds the virtues of “nice girls” and how in her day girls would never be calling boys. Yet in 1955, Marty experiences firsthand what a façade that is, as his mother is every bit the tomcat she claims she never was. 1955 also serves as an ideal period to incorporate into such a story. This is the era of the birth of rock n’ roll and of American expanding in the midst of the postwar boom. It is interesting to see the comparison between the birth of the consumer culture in the 50s and seeing it in full bore in 1985.

The performances are all around exemplary. Michael J. Fox was made a worldwide megastar as a result of this series and to this day I would guess that many people still envision him as Marty McFly. Christopher Lloyd is as zany as it gets, playing the madcap, yet lovable Doc Brown perfectly. I _guarantee_ that when people think of Christopher Lloyd (if people still think of Christopher Lloyd at all!) it is as Doc. Lea Thompson was never better than as Lorraine, where she makes everyone watching come to the same chilling realization – at one time, even your mother might have been out swiping booze from the liquor cabinet and trying to make it in the backseats of cars. Crispin Glover as the nerdy George McFly provides my favorite comedy parts, as the interaction between George and his future son is hilarious. The Biff character, played by Thomas F. Wilson, remains the villain that you absolutely love to hate. And didn’t everybody have at least one principal like Mr. Strickland (James Tolkan)? 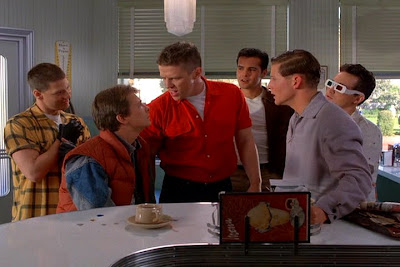 As I said, I’m sure my fawning over a movie like this – and doing so in earnest – might shock some people. I’m just being honest. Nostalgia may play a small part in some of my memories of it, but I am not at all engaging in hyperbole when I refer to this is as a magnificent movie.

Other Contenders for 1985: Ran is another amazing film and it would be the more traditional pick in a countdown like this. It is my favorite from Akira Kurosawa and I would guess that it will be a popular choice for many folks. This is one that is so good that it deserves to be a selection this countdown, but it had the misfortune of falling in the same year as another favorite. The list of other movies from ’85 that I think are the best: Witness (Peter Weir), Come and See (Elem Klimov), and Brazil (Terry Gilliam).
Posted by Dave at 6:36 AM