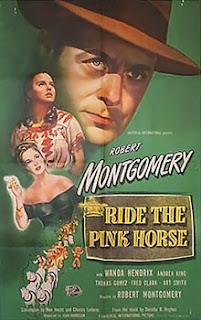 At the very least, this 1947 release from accomplished actor turned director Robert Montgomery is the new clubhouse leader in the countdown for coolest movie title! Fortunately, it is also a wonderful psychological noir, following a loner who comes to Mexico to seek revenge for the death of a former pal. Montgomery, who both stars and directs, follows a unique path to tell the story, providing scant background information and as little personal details as possible. A few hints are thrown in along the way – enough to play on the conscience of lead character Lucky Gagin – but the focus remains exclusively on the revenge Gagin seeks. Some colorful characters emerge along the way, both to assist and sidetrack Gagin, but the appeal of the hardened man is the dogged determination he exhibits in following through on his plans.

Gagin is like The Man With No Name of western lore, as he remains an enigma throughout the entire film. His given name is never revealed and very little about his past is illuminated. The audience learns only what is essential to propel the story – that Gagin is an ex-GI who has come to Mexico to avenge the death of his friend Shorty. Gagin holds a wartime profiteer named Frank Hugo (Fred Clark) responsible for killing Shorty and expects to make Hugo pay. If in the process of seeking his revenge he can cash in on some of the profits that have been made by racketeers, then so much the better. Gagin goes directly to Hugo’s hotel in order to make his work quick, but while waiting for the gangster he is confronted by sleuthing FBI agent Bill Retz (Art Smith). Retz asks Gagin not to seek justice on his own, but rather to turn over information to his department so that they can put Hugo away legally. Gagin has none of it, instead hoping to settle things on his own terms. While in town, he encounters a number of residents. Merry-go-round operator Pancho (Thomas Gomez) becomes one of the few friends in Gagin’s life, risking his own safety in order to aid his newfound drinking partner. Pila (Wanda Hendrix), meanwhile, is a young girl who follows Gagin like a puppy dog and whom he simply tolerates.

Montgomery rose to prominence as an actor in the 1930s and was a newcomer as a director. His only other directorial effort, Lady in the Lake, was released at the beginning of 1947, making Ride the Pink Horse only his second film. I emphasize this fact because there are a number of outstanding sequences that show Montgomery to have an impressive understanding of how a director can use visuals to improve our understanding of a character. Very early in the film, when Gagin arrives in Mexico, the camera follows him as he gets off the bus and begins moving through the streets of the town, to a bus station, and then searching for Hugo’s hotel. Not much dialog, no great actions, just the camera tracking Gagin as he methodically goes about his business. The result is that very early on, we know that this is a man with tunnel vision in regard to his activities and that he is resolute in following through on things. There is also a subtle quality in his direction and the story in general. What does the title actually mean? That’s up for a bit of debate and is likely interpreted differently by each viewer. In my mind, when Gagin casually tells Pila to “ride the pink one” at Pancho’s merry-go-round to hide her from a group of hoods, it at first seems completely innocuous. But as the remainder of the film plays out, it underscores how such seemingly meaningless choices can – and often do – have significant ramifications.

Montgomery is also very good as the unsentimental Gagin. Until the end, he remains a morally ambiguous character, who you never feel completely sure of. Certainly revenge appears to be his preeminent objective, but there is a sense that he’d give it all up just to make Hugo suffer by taking a gash out of his bank account. Most impressive of all is Thomas Gomez as the peasant philosopher Pancho. He was nominated for the Acadamy Award for Best Supporting Actor (which he justifiably lost to Walter Huston’s turn in The Treasure of the Sierra Madre).

This is yet another film in this countdown that cries out for a DVD release. I’m not aware of a disc available in any region, which is a shame because this is an excellent noir. Hell, at this point I’d settle for it just being shown on TCM every now and again. This is a hard-boiled, at times ruthless, noir that deserves to be more widely seen. Pulling off outstanding efforts as both actor and director, this is Robert Montgomery’s shining moment, in my opinion… and that’s saying something.
Posted by Dave at 12:05 AM