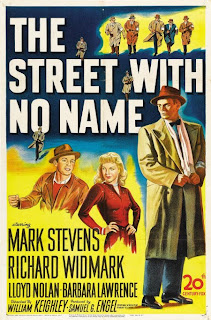 The remake of this 1948 film, House of Bamboo, has already been featured in this Top 100 and now we come to the original source. Writer Harry Kleiner pinned the script for both films, and while the exotic nature of the remake makes for an interesting experience, I think that the original is the superior of the two.

It would be easy to dismiss William Keighley’s The Street With No Name as a large-scale propaganda project that gained the full endorsement of the most notorious of curmudgeons, J. Edgar Hoover. That’s probably how Hoover viewed it – as a vehicle that could be used to cast his FBI agents in the best possible lights, as defenders of justice who always catch their man. Accordingly, he gave the go-ahead for actual F.B.I. agents and personnel to be used as actors in the film, in addition to an on-screen message to open the movie that is attributed to Hoover himself:

“The street on which crime flourishes is the street extending across America. It is the street with no name. Organized gangsterism is once again returning. If permitted to go unchecked three out of every four Americans will eventually become its victims. Wherever law and order break down there you will find public indifference. An alert and vigilant America will make for a secure America.”

Following this idealistic message from the esteemed #1 G-Man, the movie then jumps right into the middle of a crime spree in Center City. A roadhouse and a bank are robbed within a matter of days, resulting in two murders that are linked to the same gun. Realizing that this is the work of a growing gang of criminals, FBI Inspector George Briggs (Lloyd Nolan) recruits another agent to go undercover and try to infiltrate the gang. Agent Gene Cordell (Mark Stevens), posing as a thief named George Manly, begins to try and get close to local fight promoter Alec Stiles (Richard Widmark). After passing Stiles’ initial test, involving framing Manly for a robbery to see if he is an undercover, Manly then begins to get close to Stiles and his gang. Reporting back to his case agent (Joseph McIntire) on the planning of the gang, things are going smoothly until an informant in the police department tips off Stiles to the fact that the law is onto his plans. It then becomes a race to see if the FBI can keep their man safe and uncover the gang before the gang deals with the agent themselves. 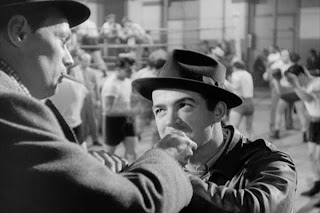 So it’s set up to be one gigantic cheerleading session for the clearly delineated “good guys” to catch the evil criminals. Fortunately, due primarily to the outstanding photography from Joseph MacDonald, things never feel that straightforward. MacDonald also did the cinematography for House of Bamboo, which was outstanding. But here, he is working with the traditional black and white of noir and he is able to use the shadows and darkness to make all of Center City feel corrupt. It becomes a guessing game as to who is legit and who is on the take.

Mark Stevens does a fine job as the agent in peril, but it is, quite predictably, Richard Widmark that owns most of the film. This was only his second film, coming a year after his debut in Kiss of Death. No one ever matched Widmark’s ability to play the sinister villain with an unexplainable touch of likability. 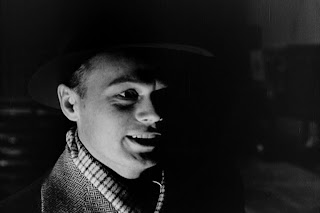