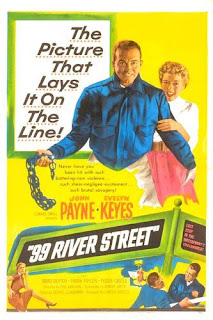 - “There are worse things than murder. You can kill someone an inch at a time…”

Kansas City Confidential may be the most well-known noir from director Phil Karlson, but I feel that 99 River Street is actually his best. While it might not contain the intricate, inventive setup of Kansas City Confidential, it plays out much more smoothly than that film and boasts two major improvements over the previous year’s effort – a much better performance from star John Payne and remarkable direction from Karlson that trumps anything seen in Confidential. It is unfathomable to me that this is not better known and discussed, both within noir circles and in terms of cinema of the era. 99 River Street is about as rugged and hardboiled as movies – not just noirs – of the 1950s get. I oftentimes wonder why it is not included among the canon of noir. Since everything from here on in is, to my mind, essential for any fan of noir, its placement here at #47 is at least one minor step to rectifying such an omission.

The opening of the film is brilliant, showing the skill of Karlson. Things open to a heavyweight title fight, with up-and-comer Ernie Driscoll (John Payne) apparently on his way to claiming the crown. As the fight progresses and we see Ernie fouled by an accidental headbutt that opens a cut and causes the fight to be halted, the camera zooms out to reveal that the fight is actually on television and the same Ernie Driscoll is watching from his living room. In the zoom out, the scar from the same cut about Ernie’s eye is shown, as is the bitterness of his gaze as he relives his one failed shot at glory. It is revealed that not only did the cut cost Ernie a title shot, it also led to the state boxing commission revoking his license and banning him from ever fighting again. The result is Ernie being forced to work as a cab driver and stuck in a marriage with a woman (Peggie Castle) that no longer enjoys the glamor of being the girl of a future champion. This quick scene is a creative way of introducing a key theme that Karlson will play with throughout the film – the different venues in which violence is condoned (a boxing ring), frowned upon (the violent outbursts that occur throughout Ernie’s now boring life), and manipulated (a scene in a theater that I will not spoil for those that haven’t seen it).

Perhaps I’m completely wrong, but my sense is that not many readers are going to have seen this one already, so an in-depth plot synopsis would be doing everyone a great disservice. It will suffice to say that over the course of a single evening, Ernie Driscoll’s life is destined to take another dramatic turn. His ungrateful wife, who is cheating on him with a jewel thief, will be murdered and the body surreptitiously deposited into the backseat of Ernie’s cab. Along the way Ernie is actually implicated in a number of crimes and is forced not only to flee from police, but also work to try and outsmart circling gangsters as well. All of this is made difficult by his struggle to try and contain the emotions that have been raging out of control ever since his forced retirement from the ring. But if there is one thing that Ernie was made to do it is fight and he has no intention of going down without putting one up on this night.

I say again, this is a hardened film. John Payne’s Ernie Driscoll is as embittered a hero as you will find in movies of the era. Just seeing the look on his face as he watches the boxing match – recounting how he was leading on all cards to win the title – drives home the disillusionment. But he is not a man without hope. He maintains a dream of transitioning into a normal life, of acquiring his own gas station and becoming successful. Payne makes you immediately care about the character, which sets up an interesting dynamic to the story. Very early it becomes obvious that Ernie is never going to be successful as long as his wife Peggie (Pauline Driscoll) is around to nag and doubt him. So it is as if you are hoping that she somehow exit his life – as if her leaving his life would be a relief. But when she is murdered (making that exit that you hope for – albeit, admittedly, on less than ideal terms!) Ernie remains at her mercy. He is now thrust into the roll of having to hunt down her killers or potentially take the fall himself.

Aside from the wonderful opening, Karlson also shows flashes elsewhere. The fight and action sequences are top-notch, with fight scenes that are surprising in how violent and realistic they feel. Payne certainly lets punches fly like a prizefighter. There are also wonderful scenes set on the New Jersey waterfront that are photographed as textbook noir. Darkness, shadows, fog that hovers over ominous spaces, it’s all there.

Alas, this is another one that has no DVD release. But it's at least one that can be viewed easily enough. On IMDB it can be watched for free, with only occasional commercials interspersed every 20-30 minutes. If you have the capability of running a feed into a TV, the picture looks great. And I can’t recommend this noir enough, so it’s worth this extra effort.
Posted by Dave at 12:05 AM