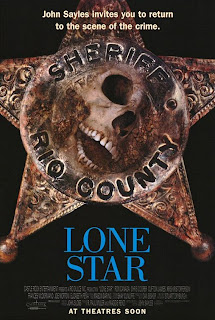 In the border town of Frontera, Texas, a pair of off-duty soldiers scavenging on an Army firing range stumble upon an interesting discovery. While the three items discovered might at first seem unrelated – a skull, a sheriff’s badge and a Masonic ring – they become the genesis of an investigation by Sheriff Sam Deeds into the most well-kept secret of his hometown. It is a secret that not only affects him personally, but also the reputation of his legendary lawman father, and the very fabric of the city of Frontera.

What transpires from this simple jumping off point is a sprawling, mysterious tale that demonstrated to me that John Sayles at his best is among the finest writer-directors working. Just watching the story unfold, understanding how effortlessly Sayles is able to take the audience exactly where he wants them to go, it is a movie that at the very least is impressive in its execution. I know some folks that have been turned off by the messages they perceived are being thrust upon them, but from the standpoint of moviemaking and good old fashioned storytelling, Lone Star is riveting stuff.

Sayles has a reputation for writing screenplays infused with large doses of social commentary. This is a trait that, in my opinion, can be disastrous for most films, as they invariably come off as preaching and moralizing to the audience – like the writer has a hammer and is intent on pounding a message into the head of everyone watching. One need only look at a movie like 2004’s Crash to know exactly what I am talking about. Fortunately, Sayles is talented enough not to fall into this trap. Does he want to get certain messages explicitly across to the audience? Perhaps, but he never insults them in the process. Instead he crafts tales that allow the viewer to be drawn into a story, be shown whatever it is that Sayles wants to display as a director, and make sense of it individually. 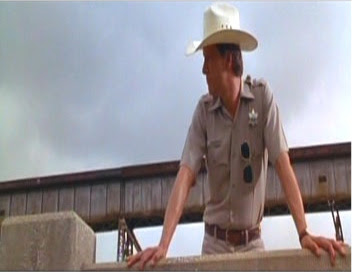 He does this in Lone Star quite cleverly, using the investigation of a decades-old disappearance turned homicide investigation to take the audience on a trip through the social life and politics of a Texas border town. And we see a lot. On the surface this is an idyllic southern hamlet, with small town values and an easygoing atmosphere. But there is tension at every turn, with relations between all the segments of the population. The blacks remain relegated to the outskirts of the town, while the large Mexican population fights for the right to have their own history taught to the children in the public schools. The long-reigning whites, meanwhile, come across as clinging onto the good ol’ boys system that they have benefited from for years. Thrust into the center of all this is Sam Deeds (Chris Cooper), a man who appears to get along with each of these segments, yet never feels truly at ease in any of single one.

Sam and his struggle to live in the shadow of his legendary sheriff father Buddy Deeds is at the center of everything. Buddy Deeds (Matthew McConaughey) is a hero and his reputation remains a towering presence in the city of Frontera. Those in the town are shocked to see his son take the position of Sheriff of Rio County, as it leads to his continually being compared to his father. While this would not be uncommon in most situations, in this case it is bizarre because it was well known to all that Sam and his father did not get along. In Sam’s teen years, when Buddy refused to allow him to see his childhood sweetheart Pilar Cruz (Elizabeth Pena), the father-son relationship was destroyed. In investigation of the evidence found on the firing range, Sam begins to unravel a mystery that deals not only with an unsolved murder but also reveals why his father responded the way that he did to the relationship with Pilar. 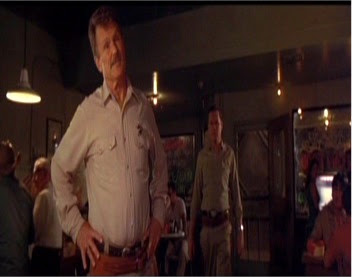 The murder mystery centers around the disappearance of longtime sheriff Charlie Wade (Kris Kristofferson), the man who held the job before Buddy Deeds took over. It turns out that the skull and badge found on the range are those of Wade, a man who had disappeared decades before and was thought to have run off with civic money. Now realizing that the sheriff was actually murdered, Sam decides to fully investigate the circumstances. Longtime residents of the town and friends of his father warn Sam not to become involved, but he is determined to discover the truth. What he soon begins to uncover shocks him. Buddy Deeds served as a deputy to Wade in the 1950s, when Wade ruled like a king in shaking down local businessmen and dispensing justice as he personally saw fit. What this meant was that Wade took care of his friends and treated the non-whites of Frontera horribly. But when Buddy stood up to Charlie one night in a saloon, and the rivalry between the two was coming to a head, Charlie then simply disappeared. Since money disappeared with him, it was assumed that he was on the run. What Sam begins to discover is that his father may actually have been involved in the disappearance. 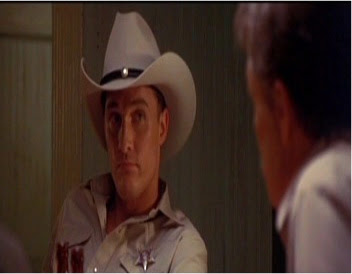 It might seem like I am giving a short shrift to the social aspects of the film, but to me these are just window dressing. These subplots are important, particularly the relationship between Sam and Pilar. Also compelling is the tale of black roadhouse saloon owner Otis Payne (Ron Canada) and how he tries to reconnect with the son he never knew (Joe Morton). I am sure that these were important additions by Sayles, and their inclusion gives the entire film the sprawling feel of a well-developed and nuanced novel. But the thing that makes Lone Star so enthralling for me is watching Sam dig deeper into the psyche and actions of a father that he never felt a connection with. The closer he gets to understanding him, he begins to see that he might have been at least partially right – his father could be a cruel, vindictive man. But at the same time, he can see a more complicated person and one that was actually looking out for his son as he thought best.

While much of my praise toward Sayles concerns his screenplay, it is also evident that he is confident in the director’s chair as well. The camera work and use of flashbacks is as good as you’ll ever see. In fact, “flashback” might actually be too harsh of a term to describe how he moves between time periods. It sounds like harsh jumps from one setting to another, but in this case they flow together. The jumps are smooth and subtle, yet obvious enough to make it apparent that the narrative has moved to a different time period. As Sam interviews people in his investigation of the Charlie Wade murder, Sayles shows the events unfolding as the old acquaintances recount the events to Sam. So in one instance Sam could be talking to Big Otis in the bar and as Otis relates a story to him, the camera will simply pan to a different area of the bar and in the process take us back forty years to watch the story unfold. Although the story is literally set in the 1990s, these flashback scenes to the 1950s are probably the most impressive in the film. Kris Kristofferson and Matthew McConaughey serve as perfect foils and the scene in which they have their final showdown is intense. Chris Cooper also shines in his role – but then again, when does Chris Cooper not shine? He is another person who has what I call the “Robert Duvall quality” of being able to excel in any role in any type of film.

This is another selection that is not completely without fault. For detractors of the film, the main complaint is that the screenplay could have been trimmed and that the movie could have been a good deal shorter. I disagree with significantly cutting the running time and don’t think that it ever drags. But as great as I think the Sayles screenplay is, there are certain small edits that could have been made to pick things up even more. In particular, I am thinking of the inclusion of Sam’s ex-wife (Frances McDormand), a football-crazed middle-aged woman with mental problems. It is a minor issue, as she is not on-screen for very long, but it still felt very awkward. Also, at times, I think that some of the racial issues are somewhat played up or stereotypical, such as some of the comments from Pilar’s mother toward newly arriving Mexican immigrants.

Still, minor quibbles when it comes down to it. When this movie is going full-bore and focusing on the whodunit aspect of the story, it’s an absolute master class of filmmaking. John Sayles has made a number of excellent films, Matewan being another that stands out to me, but I easily place Lone Star at the top of his list of credits. The success of the film is a simple formula if you think about – write a great script, find great actors, and get a little creative in how you tell the story. But we all know it’s not that simple, which makes Sayles’ accomplishment all the more impressive when we see him do it with such ease.

Other Contenders for 1996: I now realize that I actually haven’t seen as many films from 1996 as others years in this decade. Of what I have seen, not many really challenged Lone Star, but other favorites would be: Fargo (Coen Brothers), Secrets & Lies (Mike Leigh), Jerry Maguire (Cameron Crowe), and Hamlet (Kenneth Branagh).
Posted by Dave at 12:05 AM