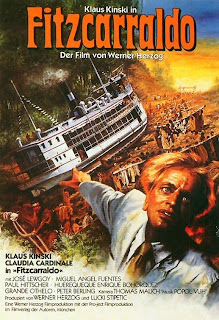 At what point do grand visions and passions overstep the realm of laudable efforts and become destructive – destructive both for the visionary and for those that happen to be caught in their path? These are the key questions asked in Werner Herzog’s 1982 masterpiece Fitzcarraldo and ironically are the issues at the heart of the making of the film.

In a similar vein to Coppola’s Apocalypse Now, Fitzcarraldo is another instance where the story of its production might be more compelling than the actual film. As shown in the documentary about it’s production, Burden of Dreams, the efforts in completing the movie were nearly as herculean as the labors of the title character. Just read some of the legendary stories and myths that have emerged regarding the shooting of the movie and it’s quickly grasped what an ordeal the entire process was. The character of Fitzcarraldo was originally slated to be Jason Robards. But Robards fell ill and had to withdraw, leaving casting of the main character of the story up in the air. By the time David Lee Roth look alike and Herzog favorite Klaus Kinski was brought in, nearly half of filming had already been completed. Herzog, however, insisted on completely reshooting in the Peruvian jungle. Kinski, upon arriving on set, promptly irritated everyone involved, ranging from Herzog to the natives who were used in the film. According to Herzog himself, one of the native chiefs even offered to murder Kinski for him. The director’s response? He couldn’t, because he was needed to finish shooting. 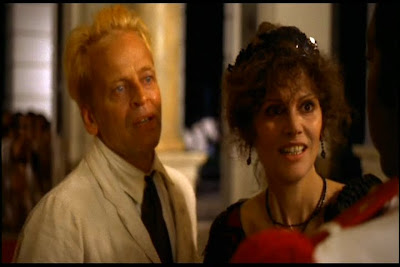 Fitzcarraldo is the story of an eccentric Irish businessman in the jungles of Peru. Brian Sweeney Fitzgerald (Klaus Kinski), called “Fitzcarraldo” by the natives because pronunciation of his full name proved too cumbersome, is a man always on the cusp of a great idea, but whose ideas always seem to fall short of panning out. His ice business seems like a great idea, but may be too cutting edge for others in Peru to understand its value. Fortunately, Fitzcarraldo is irrepressible, soldering on in his pursuits in spite of the snickers and raised eyebrows of natives who observe him.

His real passion, however, is opera, particularly the work of legendary tenor Enrico Caruso. At the start of the film, Fitz travels for hours to a Caruso performance in a distant city. Although he has no ticket, he braves the elements just hoping for the chance to hear his idol sing live. It soon emerges that his dream is to build his own opera house in the city of Iquitos and bring Caruso there for its opening night. Fitzcarraldo realizes that he lacks the necessary capital to make such a dream reality and that in the Peruvian jungle the only way to raise those types of funds is through the rubber business. At the urging of his girlfriend and brothel owner Molly (Claudia Cardinale), Fitz looks into into buying a tract of land that has rubber trees. The only lot available is located in a remote area of the jungle between the Amazon and Ucayali Rivers. The only reason it remains unfarmed is that no one has yet been able to manage the treacherous rapids that cut the land off from the mighty Amazon. When he notices a third river that that could serve as a way to transport rubber back downstream, he decides to take a shot with the land. The issue? This third river is separated from his parcel of land on the Ucayali by a rather large mountain. In order to be successful, Fitzcarraldo is going to have to find a way to drag his ship out of the Ucayali, over a mountain, and into the other tributary. Everyone except for Molly thinks he must be crazy, but Fitz is determined to bring opera to the jungle. 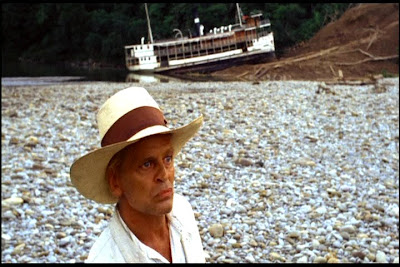 Oh, and did I mention that natives actually _were_ used to hoist a ship over a mountain? In the movie, when the characters are seen scrambling to work a pulley system to drag the boat over land, there are no special effects. Amazonian natives were actually attempting to do just that. The logistics of the entire process are enough to make an average movie-watcher’s head spin. But in understanding the ordeals encountered by Herzog and crew, it might help to explain why the futile efforts of Brian Sweeney Fitzgerald have such a sympathetic feel to them. It is like Herzog is acting out a variation of the same story he longs to bring to the screen. Is it worth such effort? It’s hard to say precisely where Herzog comes down on that question, but looking at the title of his recently-published diary from the production of the film is telling. The collection is called Conquest of the Useless.

And yet there is still much to admire about such efforts. The idea that someone is so committed to a dream, even one that is rightly acknowledged as trivial, that they are willing to risk everything to see it through – there is something very appealing about that to me. I’m drawn to people that feel so passionate about something that how others view it is inconsequential. The only thing that matters is how they personally see it. I suppose things become muddled when passion ventures into the unhealthy obsession category. When, as happens to Fitzcarraldo, the dreamer begins to see himself as an omnipotent force and one that should have no limitations on accomplishing his vision, is when support of such zeal displays a darker tone. That I am even questioning such weighty issues speaks to the power of the film. I don’t know if I would say that this is Klaus Kinski’s finest performance, but it is his performance that helps to show both sides of the issue. His ability to believably move back and forth between episodes of serious business planning to flights of madcap antics reiterates what a fine line there is between admirable passion and outlandish obsession. 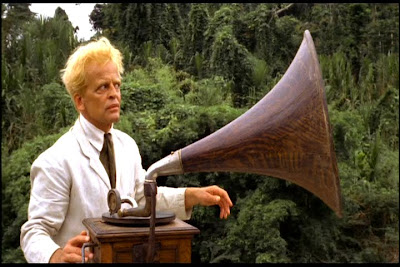 Of course through it all is the hand of Herzog. I would say the “steadying hand” of Herzog, but it seems that even he began to question whether this movie was ever going to fully come together. Whether or not the film was worth the effort he put in, I’m certainly glad that he was able to see it through. Working once again with cinematographer Thomas Mauch, the photography is simply spectacular. There are scenes of the boat on the river that are breathtaking, particularly when combined with the effect of using Fitzcarraldo’s beloved opera as a soundtrack to the journey into the jungle. Likely because of the importance of the river in each of the stories, I always think of this movie in the same way as Apocalypse Now and Aguirre, The Wrath of God. They are obviously three very different films, but it is likely the spectacular photography that is central to all three. Or perhaps just the general sense of madness, whether real or imagined, underlying everything that happens in each film.

The thing that always amazes me about the flow of this movie is how it undergoes many shifts in tone. At times it is laugh out loud funny, as the peculiarities of Fitz seem like something out of a screwball comedy. Occasionally it plays like run-of-the-mill drama. There are certain moments that are hair-raising, if not downright eerie, such as when the crew of the boat sees a lone black umbrella is seen flowing toward them on the river. Obviously, such an item has no business being in the Amazonian wilderness, and instantly thoughts begin to turn toward stories of those that have ventured into this jungle and never returned. The movie even begins to take on a triumphant tone as progress is made in moving the boat across the mountain.

All in all, it's a long, wild ride in following the eccentric Fitzcarraldo. I'm just glad that Herzog turned down the offer of the tribal chief and finished the film!

Other Contenders for 1982: A pretty easy year for me to make a decision. It’s not that there aren’t other good films from ’82, but I just prefer Fitzcarraldo that much more than any other. A lot of the nearlies in this year are movies that have taken me multiple viewings to really appreciate. For instance, I initially balked at Ridley Scott’s Blade Runner but have since gone back to it and find it a much better movie than I initially assessed it. I still hesitate to place it in on the pedestal that some do, but it’s still outstanding. My view on Fanny and Alexander (Ingmar Bergman) is somewhat compromised by the fact that I’ve only seen the theatrical version and not the full television cut. Based on what I’ve seen, I like, but something tells me I’m missing out by not seeing the full TV version. Some of the others in this year that I would rank as favorites – The Night of the Shooting Stars (Paolo and Vittorio Taviani), Missing (Costa-Gavras), and Veronika Voss (R.W. Fassbinder).
Posted by Dave at 12:02 AM