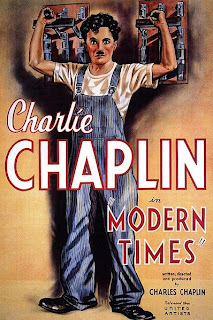 As difficult as it has been picking a favorite or best film for each year, I think I might have found something even tougher: how about trying to pick the funniest scene from this Charlie Chaplin masterpiece. Is it the opening factory sequence, in which The Tramp is trying desperately, and unsuccessfully, to keep pace with the quickening assembly line? Or how about the legendary feeding machine scene which has The Tramp being used as the guinea pig to test a new invention that would do away with the lunch break and allow workers to stay on the line while having their meal? Could it be The Tramp innocently picking up a red flag that falls off the back of a truck and then being mistaken for the leader of a communist rally? Or maybe when The Tramp is eating lunch in jail, salts his food, inadvertently gets hopped up on cocaine, and foils an attempted jail break? It’s a staggering prospect trying to pick from such classic moments in film history – and those listed above are all scenes that take place within the first thirty minutes of the film! There are many other unforgettable sequences throughout. There is not a dull moment in Modern Times and I never hesitate in declaring it to be my favorite of Chaplin’s career. 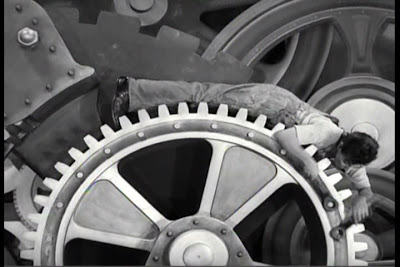 There are other Chaplin films that I adore – City Lights being chief among them – but it is Modern Times that continually reminds me how brilliant the man was as a writer and director, let alone as a performer. The scenes that I described above, and the others that follow throughout the course of the film, are so well-developed and entertaining that they could honestly work as stand-alone shorts. They are hilarious by themselves, needing no introduction or development from other sections of the movie. Yet, Chaplin is skillful enough as a director to piece these skits together into a full-length feature that flows seamlessly.

The plot is simple, consisting of a number of settings that serve to put The Little Tramp into situations that allow Chaplin to work his magic. The Tramp is a worker on an assembly line, doing nothing but tightening bolts at an ever-increasing pace. While there, he is used as the subject in testing the newly invented feeding machine, with hilarious and disastrous results. After wreaking havoc in the factory and being sent to a mental institution, he is fired and then becomes swept up in events that he continually wanders into. These include things like a communist march, jail breaks, burglaries, and trying to come to terms with the squalid conditions that a majority of people are living in during the 1930s. Along the way The Tramp befriends a young orphan girl, the Gamin (Paulette Goddard), and becomes determined to find a job in order to provide a decent home for the two of them. 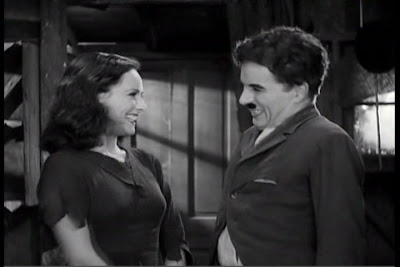 The tales concerning how the film was originally conceived and how production ultimately proceeded are interesting and quite relevant to understanding the film. Legend has it that Chaplin originally intended for this to be his introduction to the talkies, a trend that he had resisted since their introduction. He then supposedly came to the conclusion that The Tramp character would lose much of its appeal if he were to begin speaking in the films, and so the idea was abandoned. Chaplin instead decided to proceed in creating a silent film, but adding sound effects and a few quick lines of dialogue from minor characters. And even this dialogue sounds very mechanical or filtered – such as coming from a record player or from the steel tycoon’s video screen. I don’t know that I would go so far as to say that The Tramp would have lost effectiveness with dialogue, but I do know that dialogue is completely unnecessary in this movie. Chaplin made the right decision in sticking to what he believed in and doing what he did better than anyone else.

I also cannot comment on the veracity of Chaplin having originally conceived of the film as a talkie, but it makes sense when considering the themes of the film. The Tramp is a man being forced into an increasingly modernizing society which he is clearly uneasy in. It mirrors the relationship between Chaplin and the advances being made in the motion picture industry. Chaplin did not feel comfortable moving his popular on-screen persona into the sound era, just as The Tramp himself was uncomfortable in a factory setting or dealing with technological advances. So these tales make perfect sense when you consider that the struggle of The Tramp to survive in “modern times” does mirror the effort by Chaplin to maintain his artistic visions in the face of a changing industry. The social commentary is laid on thick, but never reaches the point of being overbearing. Everything is tongue in cheek, as if Chaplin himself recognizes that progress itself is not inherently bad, but that there are downsides to everything. 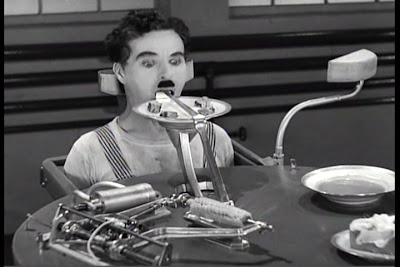 Rather than drag things on to an unnecessary length, I’m going to acknowledge the fact that just as words would have been superfluous in the film, so too are they in commenting on it. No writing (particularly mine) can do it justice or properly describe how delightful a film it is. No matter how much I expound on the hilarity of when The Tramp salts his food with cocaine, it won’t fully sink in until you see him smiling with white powder stuck in his mustache. The description of the feeding machine might sound downright silly, but once you see Chaplin’s moves and facial expressions it’s impossible not to laugh. These moments just have to be experienced. I’m guessing that the folks that take the time to read this blog and comment have far more familiarity with Chaplin and this film than I do, but anyone who reads this and hasn’t seen Modern Times is in for an amazing event. And even for those that have seen it, it never hurts to go back and be reminded of what a truly great film is.

Modern Times may not be my favorite film that I’ve reviewed over the short life of this Year’s Best series (I love Trouble in Paradise too much to make that assertion), but I don’t think I’m exaggerating in declaring it to be the most essential. Not only is it a cornerstone in the history of cinema, but Chaplin transcends just film. He is a cultural icon and this movie has it all -- entertainment, a message, and historical value. It is a significant document of an era.

Other Contenders for 1936: Really no competition as far as picking the best of 1936, but there are a few others from this year that I enjoy. Humphrey Bogart is great as fugitive gangster Duke Mantee in The Petrified Forest. After the Thin Man is not on the same level as the first installment of the series, but it’s still entertaining. A lot of the comedies of this year are a little to “screwy” for my tastes, but Powell and Loy are also very good in Libeled Lady.
Posted by Dave at 11:10 AM