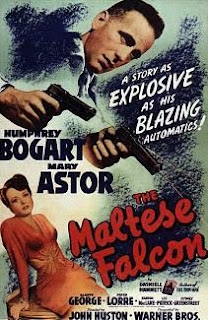 - “The stuff that dreams are made of…”

The film that is often acknowledged as kicking off the “classic noir cycle,” The Maltese Falcon remains a true treasure of American cinema. Does it possess all of the elements that one immediately looks for in film noir? Not necessarily – it is not nearly as dark, both in terms of look and content, as other classics. But it is so important in defining how the noir anti-hero is supposed to act and the moral ambiguity and flip-flops that these men must go through. Its legacy cannot be overestimated. Aside from helping to jumpstart that what would eventually become known as “film noir,” it was also the springboard for a number of other important moviemaking developments. It was the first film directed by John Huston, resulting in one of the most impressive debut films in Hollywood history. Also, while Humphrey Bogart was already a well-known quantity and his rise to stardom had already been started by High Sierra earlier in the year, this film is what put him into a whole other stratosphere of stardom. On these facts alone, The Maltese Falcon is rightly recognized as a landmark.

I think the quote that opens this write-up, which remains one of the most famous in the history of film, summarizes the entire production. As already mentioned, you have a director who has never been at the helm of his own major production. A leading man who was not the first choice – George Raft is actually said to have turned the role down. The story is based on a pulp novel that, for all of its merits, boasts a handful characters that could justifiably be labeled one-dimensional. How does the studio combat this? It puts together an absolutely dynamite cast to fill every role, bringing the characters to life. Peter Lorre and Sydney Greenstreet make characters like Cairo and Gutman some of the most unforgettable personalities ever committed to celluloid. The movie itself is confined to only a handful of sets, the bulk of it in a single room of an apartment, which is something that one would normally expect from a stage play. And yet never once does the movie feel like it is bound in anyway to the set, or anything else for that matter. Everything comes together for a wonderful, wildly entertaining picture. Truly the stuff that dreams are made of. 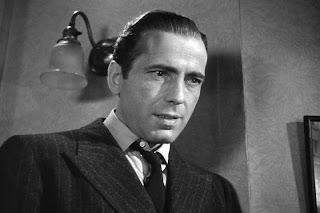 Bogart plays legendary Dashiell Hammett character Sam Spade, a private eye who owns an investigation firm with friend and partner Miles Archer (Jerome Cowan). When the two are hired to track someone for a mysterious Miss Wonderly, Miles is murdered. Determined to discover who killed his partner – not just out of friendship, but also so he is not set up for the crime – Spade is plunged into a world of international intrigue. Miss Wonderly turns out to actually be Brigid O’Shaughnessy (Mary Astor), a woman who has been traveling the world trying to track down a valuable treasure. The item she seeks is the Maltese Falcon, a statue of a bird that is encrusted with priceless jewels and gems. The danger arises out of the fact that she is not the only one that seeks the figurine. Other unscrupulous characters like Joel Cairo (Peter Lorre) and Kasper Gutman (Sydney Greenstreet) are also on the chase. Spade is thrown into the middle of everything, as he tries to fend off the police at the same time he tries to profit from the search for the missing falcon. 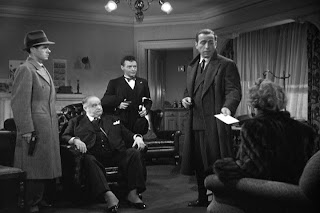 Every performance in this film sparkles, because they have to. Almost every moment of the film takes place indoors and all of the action is propelled by lengthy conversations between characters. The connection between all of the actors leaps off the screen, giving all of the bickering and conniving so much authenticity. Bogart has a number of characters for which he will always be celebrated, but next to Rick Blaine this is might be his most legendary. He _is_ Sam Spade. He makes Spade the prototype for how private eyes would be portrayed in cinema for at least the next thirty years. Peter Lorre and Sydney Greenstreet work together flawlessly, alternating between being allies and enemies. Cairo and Gutman may at times border on caricatures, but what does it matter when they are so much fun to watch. Great ensemble acting, combined with the unmatched cadence and snappiness of Hammett’s dialogue is arguably the greatest asset of the entire production. It is not all about the actors though, as director and cinematographer pull their weight as well. Director of photography Arthur Edeson uses bizarre camera angles and very low-key lighting to ensure that the simple sets never become boring. The shadows that run deep into the background are striking, giving the impression that there is some intense source of light emanating from the floor. This effect is accentuated by camera angles and placement where the camera is situated at ground level, looking up at the characters as they converse. 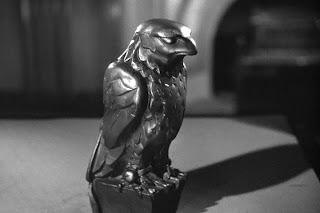 Even with all of this going for it, what ultimately elevates The Maltese Falcon to greatness is, in my opinion, the fact that what should be nothing more than a simple mystery is made into an interesting character study. The falcon is the ultimate McGuffin and once you realize that they are all chasing an object they are never going to capture, it becomes interesting to try and understand what motivates each person. Obviously, the most interesting of them all is Spade. The first time you see the movie, it really is difficult to get a handle on where he stands until the very end. Is he with Brigid or only out for himself? Is he searching for Miles’ killer or just trying to save his own skin? It almost seems like Spade himself doesn’t know the answers to these questions, which only makes him all the more intriguing as he gets drawn in deeper.
Posted by Dave at 12:05 AM