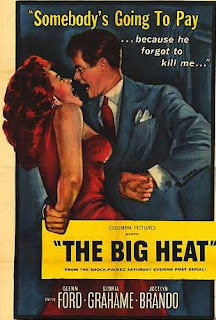 It is universally accepted that the most important films in the career of legendary director Fritz Lang came in his native Germany. Working for nearly fifteen years in German cinema, Lang mastered silent cinema and early forays into talking pictures. The classics in his filmography from this era alone are enough to make a cineaste salivate – Metropolis, Spione, Die Nibelunge, the Dr. Mabuse films, M, to name just a handful. Historically speaking, by the time that he made it to Hollywood in 1936, his legacy was already so well-established that anything else he did would be the proverbial icing on the cake. Even without any English-speaking films, he would be remembered as an all-time great. Fortunately for noir junkies like myself (and likely everyone else reading this), Lang did not simply live off of his reputation. His influence hangs over nearly all of the genre or style that we know as film noir, and a number of his movies in the 40s and 50s remain part of the noir canon. If, as many contend, he did not approach the greatness of his best German pictures, at the very least it has to be said that he still made a number of outstanding dramas and crime films. And The Big Heat just might be the best film that he ever made in Hollywood. If it isn’t, it is at the very least #2. 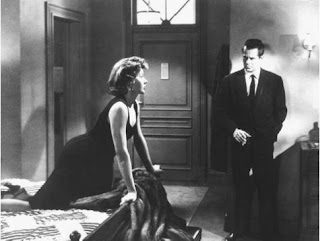 The Big Heat is a movie that begins at full-speed and never lets off the throttle. The action starts right away, as within the opening minutes a cop named Duncan blows his brains out in his front parlor. As a parting gift to the world, he leaves behind a note that details the payoff money that he and other officers have been receiving from crime boss Mike Lagana (Alexander Scourby). But Duncan’s wife (Jeanette Nolan) finds the note and before contacting authorities about her husband’s suicide, she calls minions of Lagana to try and parlay the incriminating note into a personal payoff. None of this is known to homicide detective Dave Bannion (Glenn Ford) and he begins an investigation that he believes will be a routine suicide. But something doesn’t feel right to him about it all and despite warnings from his superiors to leave it alone, Bannion keeps digging. Soon he uncovers a girlfriend of Duncan’s and continues his inquiry. When the girlfriend (Dorothy Green) turns up murdered soon after speaking with Bannion, he becomes even more suspicious. He wants to pursue things even further but is continually held back by superiors in the police department. When clues begin to point him toward Lagana, Bannion amps up the pressure and confronts the gangster face-to-face. In response, Lagana plants a car bomb intended to kill the detective. Instead, the bomb kills Bannion’s wife (Jocelyn Brando) and sets Det. Bannion off on the ultimate vendetta. Removed from the police force, Bannion pursues Lagana and his minions like Vince Stone (Lee Marvin) for personal vengeance. Eventually teaming with Lagana-Stone gun moll Debby Marsh (Gloria Grahame), Bannion remains determined to play things out to the dangerous conclusion.

Few directors handled the theme of revenge as well as did Fritz Lang. Both in Germany and in Hollywood, many of his greatest films dealt specifically with characters seeking vengeance. In The Big Heat, though, the obvious question becomes when does a quest for vengeance go too far? Dave Bannion has been hurt as no man should ever be hurt. His wife is murdered, his young daughter left to grow up without a mother. He is justifiably looking to get even. No one could blame him for going on his bloody campaign. But the collateral damage that accumulates in the process is extensive – other lives are lost, for which Bannion seems to have little regard. What makes Bannion’s actions all the more ambiguous is the fact that everyone else in the city appears capable of equal callousness and violence. Does this, in turn, justify whatever Bannion has to do to Lagana and his gang? It seems admirable to dismantle the Lagana organization, but it seems odd for a former by-the-book investigator to suddenly turn into a ruthless vigilante. And perhaps that is what is to be taken from the tale. In The Big Heat, Lang creates a world in which a very thin line separates the honorable and principled in society from the most ruthless. They are all connected in some way. Even more importantly, Lang shows how quickly one can appear to move from one side of that line to the other. Bannion, once a hard-working detective, quickly transfers that same doggedness and determination to his vendetta. 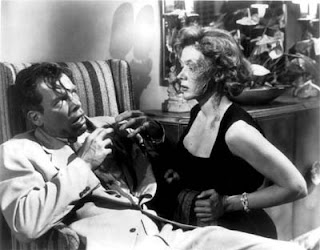 Earlier in the week, I admitted that Glenn Ford was not the strongest actor of his day, but Dave Bannion is probably his most exemplary performance. He gives Bannion the right amount of menacing attitude without going too over the top. The real standout performances come from those on the other side of the law, meaning Lee Marvin and especially Gloria Grahame. Marvin is the tough guy who thinks he will do anything to prove his worth to Mr. Lagana, although when he comes face-to-face with Bannion he sheepishlky backs down. Grahame, meanwhile, is a wisecracking dame who stays with boyfriend Vince because it allows her to drink and shop nonstop. Grahame steals every scene that she is in, and in my opinion, manages to turn Debby into the hero of the film.
Posted by Dave at 12:05 AM