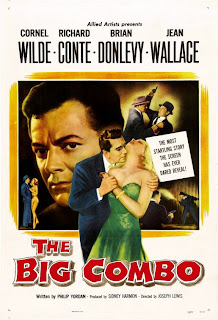 - “First is first and second is nobody…”

I remember when I first made a conscious decision to really dig into film noir, I began visiting various noir web sites and message boards in search of as many recommendations as I could find. I got some great advice in the process, but as I would do for any newcomer to noir who asked for names of films, the majority of the recommendations centered on those that enjoyed a strong reputation in cinema in general, not just noir – Double Indemnity, The Maltese Falcon, Out of the Past, and similar bona fide classics. The advice was still important, pointing me in the right direction on a number of films, but I remember one post in particular when somebody basically said this to me: “All of the recommendations so far definitely point out the most important films in noir, but if you want to see the best, do yourself a favor and get a copy of ‘The Big Combo.’” I promptly did just that, ordering the DVD and quickly realizing it was one of the finest noirs that I had yet seen. The more interested I became in noir, and the more that I read and learned about it, I came to realize that The Big Combo also enjoys a strong reputation in noir circles. Concerning film in general, though, it is not often talked about in the same breath as those previously mentioned classics, but it deserves to be.

Like yesterday’s director, Edgar G. Ulmer, Joseph H. Lewis is assessed as one of the finest directors to emerge from Poverty Row. Lewis produced two highly thought of noirs with 1950’s Gun Crazy and this gem that came near the end of the classic noir cycle. Between the two, Gun Crazy enjoys more widespread critical acclaim, but there isn’t much of a debate in my own very personal assessment – this is the best film that Lewis ever made. Perhaps not the “greatest” or most important, but for me it is his most entertaining and best-looking. 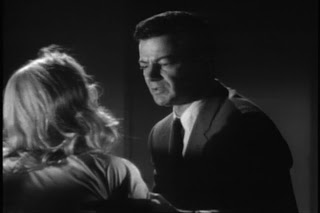 As is common throughout noir, obsession abounds in this tale about one police officer who is determined to unravel the mystery surrounding a crime boss. Leonard Diamond (Cornel Wilde) follows everything that mob boss Mr. Brown (Richard Conte) does. He tracks his movements, his illicit operations, his business partners, and even the women that he pursues. His entire life is devoted to toppling the Brown syndicate. Brown, meanwhile, is equally as enamored with thrill-seeking society girl Susan Lowell (Jean Wallace), who stays with Brown despite the horrible treatment that she receives from him. The obsessions of each of these characters seem too strong for any of them to break, meaning that things become explosive when the three of them become entangled. 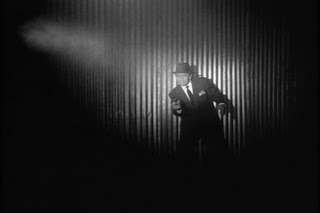 The thing that initially struck me about this film is that for a so-called B-movie, it boasts an incredibly strong cast full names that are recognizable to cineastes of today. I don’t know how large its budget was, but it was big enough to land noir staples like Richard Conte, Cornel Wilde and Brian Donlevy. Even with such names in the credits, the movie maintains the visceral, gritty feel of the best B-noirs. To be sure, Lewis must be given much credit for this strength, but the biggest factor in maintaining this atmosphere is the photography of John Alton. It is nothing short of divine. The stark contrasts between black and white are almost dream-like, with fog rising around and obscuring characters to create hallucinatory effects. Just look at the screen cap below – it is probably the most iconic shot in all of film noir, composed and executed by the greatest cinematographer to ever work in the style. Words can’t do justice to how impressive Alton’s work is in this film. He might have built his reputation on his outstanding collaborations with Anthony Mann, but he enjoyed his crowning achievement in The Big Combo. Still, I don’t want to overlook how good Lewis is throughout. The man continuously found inventive ways to stage scenes, doing ingenuous things to amp up the tension. Little touches like Mr. Brown using his partner’s hearing aid to torture the rival Diamond. Or when Brown’s same partner is set up by would-be conspirators and before the gunshots start flying, Brown removes the hearing aid. When the scene then continues, we see the muzzle flashes and the reactions from those involved, but the whole sequence is filmed in silence, mimicking what the horrified man is going through. 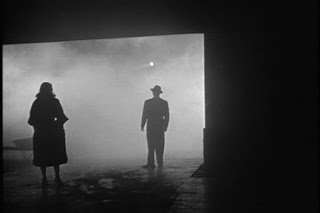 This is one that needs to be gone into fresh, so going into unnecessary specifics regarding the plot would be uncalled for. I'm assuming that most people reading this have already seen it, but I'm sure there are a few who have not and I want to spoil nothing. What I will say is that as I'm posting this on Sunday afternoon and reading through it, it has me questioning my own placement. #27 is an incredible compliment, but this is one that I might regret not moving it even higher. A truly great film.
Posted by Dave at 12:05 AM