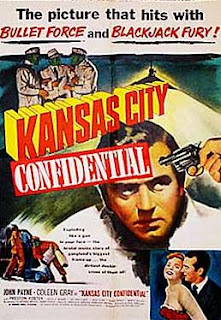 - "What makes a two-bit heel like you think a heater would give him an edge over me?"

This is another movie that I struggled with in finding the proper placement. In my original rough draft, it was much higher, more toward the top 40. After doing some reshuffling, it fell back into the 60s, as re-watching some films moved them above it. Not having watched it in some time, though, this was one that I needed to revisit before I sat down to write any kind of review. Obviously, the experience was a positive one, as I have moved it back into the Top 50. I also think that I have pinpointed why my feelings toward it are constantly fluctuating. The set up and premise to the story is very inventive, in a kind of “that’s a brilliant idea” response to the caper. But things don’t play out as memorably as one would suspect from such a buildup and the conclusion does leave something to be desired. The planning and execution of the heist, along with the settling of the proceeds, is intriguing enough to carry any weaknesses. Perhaps the payoff feels disappointing because the development is so compelling. 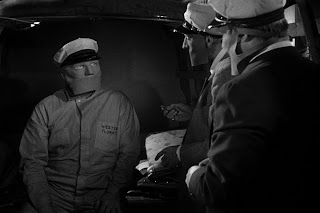 How plausible it would be to maintain the secrecy that mastermind Tim Foster (Preston Foster) demands is debatable, but I have to admit that it is an ingenious idea. For weeks, Foster sits in an apartment and watches the routine delivery schedule of an armored car as it makes its usual drops at a Kansas City bank. He has concocted a plan to rob the armored car, using a florist truck as a getaway car, and thus use an actual florist deliveryman (John Payne) as the unsuspecting fall guy. For muscle on the job, Foster recruits three well-known KC hoods, meeting with each of them individually and keeping his face concealed so that he can never be identified. He also forces all of the hijackers to wear masks and to keep their identities secret from everyone but him. The reasoning is obvious – if one of them is apprehended and flips, they can give up nothing on any of the others. The robbery goes off as planned, with the hapless Joe Rolfe (John Payne) picked up for the job. Meanwhile, the actual robbers make their getaway. Foster, known to the others as Mr. Big, tells them that he will hold onto the cash until the heat dies down. They are all to meet up in Mexico when Mr. Big thinks it’s clear to disperse the money. In the interim, Rolfe begins feeling the heat in a major way from the police, as his ex-con status makes him a usual suspect. The police brutally beat him to try and get a confession but are unsuccessful. When Joe is released, he has an underworld friend give him a line on one of the robbers and begins his own search to track down the hijackers and the mastermind.

The robbery, its aftermath in Kansas City, and Joe’s vigilante search for the robbers are the best parts of the movie. It is hardened, at times brutal, stuff as the police are certain that an ex-con in the vicinity of the heist can be no coincidence. Although he is committed to making it in the legitimate world, his life is shattered after he hits the front pages as the prime suspect in the robbery. Thus, he pursues the men who framed with the coldblooded nature of a seasoned assassin. The tension remains relatively high when all of the culprits come together in the bungalows of Mexico. It is a cat and mouse game, as the henchmen begin to suspect who the others are, but none of them want to come right out and reveal themselves. At the same time, Foster realizes that Joe is an imposter, pretending to be one of the robbers, and thus has to proceed with extra caution. His role is further complicated when his daughter Helen (Coleen Gray) drops in for an impromptu visit and becomes attracted to Joe. I will not at all reveal how things play out, but as I said, the conclusion does not maintain the same excellence of the buildup. Still, it’s a hell of a ride getting to that point. 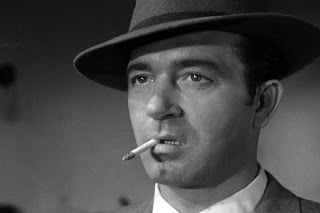 The accomplishment by director Phil Karlson and company is the ability to maintain the anxiety without any real mystery. The viewer knows all of the culprits, knows the intimate details of the robbery, and is fully aware that Joe is a poser. The apprehension results from the dangerous game that you watch Joe playing, wondering how long he can keep his identity concealed. John Payne – a very solid noir actor – gives an impressive performance as a desperate man, driven to taking extreme chances to regain control of his life. It is also entertaining to watch the wonderful supporting case, boasting great character actors like Lee Van Cleef, Jack Elam, and Neville Brand. This is one that I easily could have bumped up the rankings a bit, but that's how it goes in countdowns like this. It is still an essential noir.
Posted by Dave at 12:05 AM