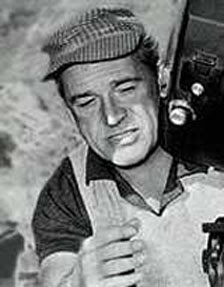 - “The shock of glimpsing an entire life, an entire world, in a single little shot is much more important than the most brilliant dialogue.”

I post the link to this wonderfully written article, titled “Anthony Mann & The Western Renaissance,” because writer Peter Wild raises a key point that factors into my own assessment of the career of Anthony Mann. Wild’s piece deals with the recent mini-renaissance of high-quality westerns that have been released – The Assassination of Jesse James, the remake of 3:10 to Yuma, The Proposition, Seraphim Falls – and argues that many key elements in these films are heavily influenced by Mann’s work in the genre five decades earlier. It is a very interesting read, and I encourage anyone interested to read through the whole thing, but there is one point in particular that I want to highlight. Wild brings up the fact that there isn’t a single Anthony Mann western that one would likely hold up as “the greatest western ever made.” John Ford has The Searchers, The Man Who Shot Liberty Valance, and My Darling Clementine. Howard Hawks has Rio Bravo and Red River. Clint Eastwood has Unforgiven. Sam Peckinpah has The Wild Bunch. All have, at one time or another, been listed as possible candidates as the best western of all time.

Despite making a number of outstanding westerns, Anthony Mann has no such signature film. His cycle of Jimmy Stewart westerns is universally praised. Man of the West, seen as one of Gary Cooper’s final great performances, is highly regarded by critics. Overlooked gems such as The Furies have been rediscovered and re-released in the past few years and are beginning to be appreciated. But even I, as a huge Anthony Mann fan, don’t know that I would put forth just one of these westerns as possibly the best ever made. Instead, as Wild points out in his article, the power of Mann’s westerns is apparent when considered in total. Individually, they might not reach the heights of the best Ford or Hawks western, but cumulatively they make up a body of work that places Mann as an equal of any other director to work in the genre. The same kind of argument could probably be extended to cover his work in film noir as well. In my opinion, none of his noirs are quite to that “greatest of all time” level, but when you look at how consistently outstanding his work is and consider a body of work that includes gems like T-Men, Raw Deal, Side Street, Border Incident, and even a noirish thriller like Reign of Terror, it becomes apparent that he really is one of the best.

Particularly with his westerns, I think the main reason why it is not easy to select just one or two of them as his best are that they are all of a consistently high quality. The five “psychological westerns” that Mann made with James Stewart are all great films. But which one is the best? Ask five different movie fans and you could get five different answers. Then you have to consider accomplishments like Man of the West, The Furies, and even Devil’s Doorway which is an overlooked gem. Such consistency makes it hard to pinpoint exactly which of Mann’s westerns deserve to be championed as worthy of the lofty labels mentioned earlier.

And this is without even mentioning the final stage of Mann’s career, that of the epic adventure. I have only seen El Cid from this stage, but I absolutely love it, as I do Mann’s entire output. He was a workingman’s director, who gradually moved his way up through Hollywood and pieced together a wonderful career. There is not a bad film listed below.

Reactions to the next entry ought to be interesting and all over the map. Up next is the always controversial Brian De Palma.

And just as a general note, I decided that we're going to the "blind countdown" mode at the midway point, so 15 and in. That's the perk of running things, I can switch it up slightly at my own whim! Revealing each director in advance only gives one off day to prepare any kind of list. But with two days allotted for each posting, the blind reveal still allows a second day for comments and lists. So, to heighten drama for the second half, I think it will work well.
Posted by Dave at 12:05 AM