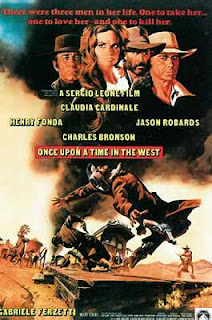 Yes, I know that this one debuted in the United States and worldwide in 1969, but in sticking with my original guidelines in choosing my #1 for each year, I am going with the earliest release date. By that criterion, Once Upon a Time in the West becomes a 1968 movie and saves me the giant migraine that would undoubtedly set in if I had would be forced to choose between this western classic and the film that I have chosen for 1969 (but more on that in two days!).

I have a unique history with the films of Sergio Leone, particularly his westerns. The first movie of Leone’s that I ever watched was actually his final film Once Upon a Time in America. This one is known to be something of an acquired taste, but I loved it from the start. His westerns, however, I did not warm to immediately. I decided that I would go through them chronologically, so I watched the entire Man With No Name trilogy, going into it with unbelievably high expectations. Upon first viewing, I have to admit that I was somewhat underwhelmed. I liked them, but not to the extent that I had been led to believe that I would. This meant that as I went into Once Upon a Time in the West, I expected a similar reaction. Instead, I quickly realized that this was what I was originally expecting of a Sergio Leone western. It was an engrossing experience. 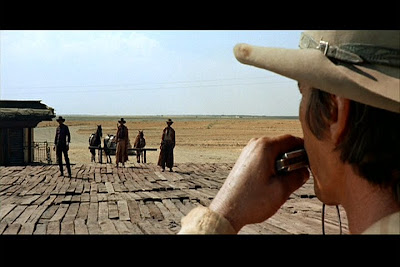 Following multiple characters through storylines that are woven together into one cohesive narrative, Leone depicts the once Wild West becoming civilized. The movie begins with an iconic opening scene in which three men wait at a train station to kill the enigmatic Harmonica (Charles Bronson) when he gets off of the train. Executed with leisurely pacing that makes the buildup more tense, it culminates in a shootout that sees Harmonica kill all three men before continuing on his journey. Around the same time, Brett McBain (Frank Wolff) waits with his children on the desolate farmland for the arrival of his new wife. Before she can arrive, however, the family is massacred by a group of hired outlaws led by the notorious Frank (Henry Fonda). Frank and his men are hired by the railroad baron Morton (Gabriele Ferzetti), who covets the McBain farm in order to complete his vision of a railroad all the way to the Pacific. In order to conceal who is behind the massacre, Frank attempts to plant evidence that will lay the blame at the feet of another outlaw, the recently escaped Cheyenne (Jason Robards). Eventually, Cheyenne and Harmonica come together in opposition to Frank, protecting Jill McBain (Claudia Cardinale) when she becomes entwined in the chaos. 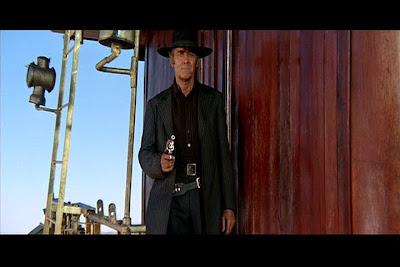 To go much further with a plot summary would require a lengthy essay. Suffice it to say that the story is epic in scope and plays like an elegy to the Old West that Leone and other legendary directors had created in their films. In Frank, you have the outlaw gunslinger who realizes that the days of he and his compatriots are quickly coming to an end. He is scrambling desperately to ensure that he remains important and that he maintains a line of work that will utilize his coldblooded skill set. Frank works for Morton, despite the fact that men like Morton are the root cause of making Frank obsolete. Cheyenne is in a similar position, in that as an outlaw he is finding it impossible to maneuver as he once did. His past reputation allows him to be set up by Frank, leaving him a man with a bounty on his head and all the dangers that entails. Harmonica’s entire life has been consumed by a vendetta, a commonly depicted occurrence in western tales. And sometimes overlooked, is how the journey of Jill McBain is illustrative of the death of the Old West. For so long the west represented a land where people had the ability to start over; where an individual’s history could be overcome. Jill is a woman that is moving to the west in search of such a new beginning, hoping to forget her past as a prostitute in New Orleans. Instead, she is quickly jolted into the reality that such an option is no longer viable and is plunged into the resulting chaos.

The image of the Old West has come full circle, from the mythology of John Ford all the way to the apparent end of an era in Once Upon a Time in the West. Leone even went to Monument Valley, the favorite location for John Ford, and filmed breathtaking scenes of Jill being driven to the McBain farm. I don’t want to extend this metaphor too far, so I am in no way insinuating that this would be the last of the great western movies – far from it, as great westerns have continued to be made until the present, if at a less consistent pace. But it is fascinating to see Sergio Leone – a man who loved westerns to the point that in preparation for this film he, Bernardo Bertolucci and Dario Argento embarked on a marathon of classic westerns in order to spark ideas – crafting a movie that could almost serve as a final chapter in a history of the west. 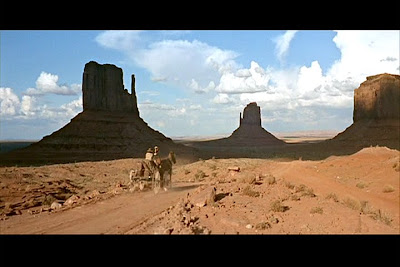 The movie is a collaborative effort that emerges even greater than the sum of its parts. In terms of acting, what elevates the film for me is the interaction between the characters and the smooth transitions that weave different strands of the plot together. My main gripe in other Leone westerns is that they can sometimes play like a series of vignettes, where individual scenes stand alone rather than working cohesively as one film. This is never an issue in Once Upon a Time in the West – things might feel overly-sprawling at times, but they are always brought back in sync. This is why I say that the film is a collaborative effort, as Leone and the other writers deserve credit, but so too do the actors. The casting of Henry Fonda, an All-American icon, as the ruthless Frank must have been a head-scratcher at the time. Even Fonda was reticent, as he initially turned down the role. However, he would soon come to regard it as among his finest performances, and I defy anyone to argue otherwise. The other performances each contribute their own unique flavor to the film. Robards as Cheyenne adds many lighthearted moments. Harmonica, played perfectly by Charles Bronson, is the brooding enigma that adds mystery to it all. Basically, what I’ve said in a rather long-winded way is that the movie flows remarkably well for a film this epic in scope and length.

Still, for all of the deserved praise of those on-screen, things would not be the same without those who contributed behind the camera. I go back and forth on what is my favorite Sergio Leone film, but this one is never lower than #2. It is amazing to think that if Leone had had his way, he would have abandoned westerns after the Dollars Trilogy and moved on to other projects. The studios wanted to cash in on his western appeal and convinced him to make another. Thankfully, Leone acquiesced and this was the result. He had already proven himself to be a director of immaculate visual style and his collaboration with cinematographer Tonino Delli Colli was successful on the earlier The Good, The Bad and the Ugly. In this film they outdid even that effort, with sweeping pans and visual flourishes that rival anything ever done in the genre.

And then there is Ennio Morricone. He had already created the popular scores for the Dollars Trilogy and he would go on to compose outstanding work for decades to come. But I continue to believe that this is the finest score that he ever composed. An equally strong claim can be made that this isn’t even the best score that Morricone wrote for a Leone film, let alone in his entire career, but that just shows how strong his overall body of work is. The music is spectacular, and the memorable melody of the title song is one that I continually have stuck in my head after watching.

Other Contenders for 1968: This is a down year for my tastes, with the Leone film standing far, far ahead of any other contenders. The other films that were given serious consideration were actually very few, but they would be: Rosemary's Baby (Roman Polanski), The Hour of the Wolf (Ingmar Bergman) The Bride Wore Black (Francois Truffaut), The Lion in Winter (Anthony Harvey).

My guess would be that Stanley Kubrick's landmark science fiction film 2001: A Space Odyssey will be a very popular pick. I can appreciate much of the visual innovation, but in all honesty the movie has never done much for me and there are many other Kubricks that I prefer.

I would like to see Ingmar Bergman's Shame but have not yet had the opportunity, so shame on me!
Posted by Dave at 7:29 AM