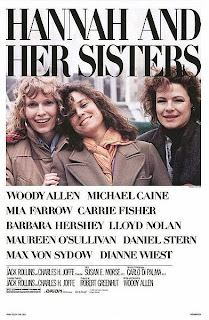 - "The only thing that might've stopped me - might've - is that my parents would be devastated. I would have to shoot them also, first. And then I have an aunt and uncle, you know, it would've been a blood bath."

As rightly praised as his hits of the 70s are (and Annie Hall was already included in this countdown), my favorite era of Woody Allen films is actually his run in the 1980s. From about 1983’s Zelig until Crimes and Misdemeanors to close the decade, I don’t think that there was a finer American director. Sure, some of the films are better than others – September is far from a classic – but all of them are worth seeing and in some instances the Woodman not only hit it over the fence, but completely out of the park. Hannah and Her Sisters is one of those instances. More drama than straight out comedy, strong cases can be made for it being the “best” of Woody Allen’s work – his best writing, his best personal performance, and possibly even his best movie.

I don’t know if I’m ready to make such authoritative declarations, but at the very least this one ranks near the top of each category. This is a movie that has a different feel than others in Woody’s body of work. As Roger Ebert described it in his glowing review (in which he openly declares it Woody’s best film), the story is “organized like an episodic novel.” This is a most fitting description, one that is perfectly in line with my own understanding of the film, where each “chapter” is introduced by some type of title or heading. Looking at it in its individual segments, it actually does play like a number of individual scenes, ones that could almost stand alone as shorts. The brilliance of Allen’s writing is the ability to take these individual episodes and interweave each storyline together and propel them all toward mutual conclusions. 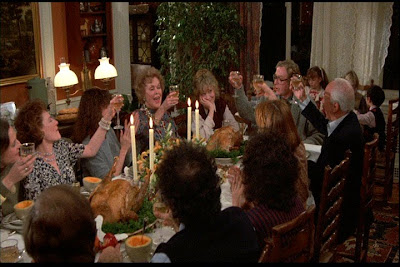 The story is told over a year-long period, running from one Thanksgiving dinner to the next. The main storylines that are covered are those of three sisters: Hannah, Lee and Holly. Hannah (Mia Farrow) is the centerpiece of the entire film, serving as the anchor for both the story and her interesting family. Hannah is an ex-stage actress who is married to Elliot (Michael Caine), a successful accountant who has become infatuated with Hannah’s sister Lee. Lee (Barbara Hershey), meanwhile, is involved in a relationship with a much older artist (Max von Sydow) who operates as something of a svnegali in attempting to control the previously-dysfunctional life of Lee. When Elliot finally gets the courage to pursue Lee, he at first is rebuffed. Quickly though, Lee accepts Elliot’s advances and the two begin to carry on a secret affair. Holly (Diane Wiest), the third sister, is a struggling actress who is now trying to get a catering business off the ground. Having battled issues with cocaine in the past, she constantly turns to Hannah for strength and financial support.

These three main storylines essentially play like straight drama, touched here and there with moments of humor. The true comic relief of the story comes from the travails of Hannah’s ex-husband Mickey (Woody Allen). Although he is a successful television producer, Mickey is constantly miserable due to his extreme hypochondria. His usual routine of visiting doctors for imagined sicknesses is suddenly disrupted when one of his fictitious ailments might actually be true. Suddenly certain that he has cancer, Mickey begins to question his life even more and reminisce about past relationship experiences. Thus in flashbacks we are treated to hilarious episodes from his past, such as a first date with the cocaine-hungry Holly and the scrambling by he and ex-wife Hannah to figure out how to conceive a child. 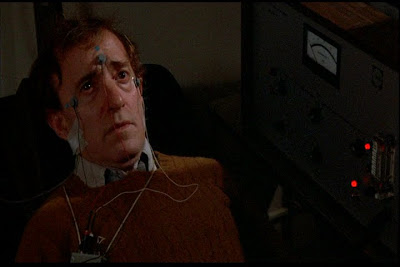 The impressive thing remains how adept Woody is at managing the various subplots. To prove how skillful he is at this, just try and pick out what you think is the most important story arc or who you believe to be the main character. A number of different answers are plausible. Perhaps it is Hannah, seemingly the rock of everything. Maybe it’s Elliot, who is the spur that kicks all of the plots into action. I even think a case can be made for Mickey, who seems to be Woody’s personal voice, as his tale provides much of the philosophical thoughts and musings that are seen in all of Allen’s films. What all this is meant to show is that Woody’s writing has the unique ability to juggle these different storylines and do so in a manner that makes each one feel like the most important part of the movie. Fortunately he also has the ensemble cast that is up to such a challenge. Two of his stock players are outstanding as usual and many have claimed that this is Farrow’s finest performance in an Allen film. Diane Wiest was honored with an Oscar for Best Supporting Actress and hers truly is an outstanding performance, one that is a wonderful mix of drama and comedy. Michael Caine also won an Oscar, for Best Support Actor, and he is wonderfully sleazy. He is another character that you just want to hate, but you quickly realize how good Caine’s performance is and that it has to be appreciated.

I won’t spoil the ending for anyone who might not have seen it (if you haven’t you should so ASAP!), but I still am always struck by how this one ends on a more upbeat note than many other Woody films. Not that his other movies are exactly downers, but Hannah seems to tidy up nicely for all involved, with minimal collateral damage in the process. And yet rather than feeling forced or overly-schmaltzy, it feels just right.

Other Contenders for 1986: A very solid year in 1986, with some movies that are critically-acclaimed and others that are personal favorites of mine. I have a unique relationship with the films of Oliver Stone, who released two in 1986. Those that I like, I really like, which is the case with his Best Picture winner Platoon. I think it's outstanding. Others, I just don't care for, which is the case with Salvador. This feels like an early attempt by Stone to make the politically-charged films he would become known for, but he's not yet mastered it. I also have always loved Rob Reiner's Stand By Me. This one can be divisive, as I know many folks who detest it, but I have always enjoyed it. And while I did not initially like David Lynch's Blue Velvet, I've appreciated it more and more each time I watch it. I still don't think it's Lynch at his best (in my opinion that comes later), but I know that the majority opinion is that this is the finest film he has ever made and one of the best of the last 20+ years.

I also have to admit not having seen Jean de Florette, which I really want to. I had ordered it from Amazon during a sale, but it was back-ordered, so I got frustrated and canceled the order!
Posted by Dave at 12:02 AM