[NOTE: This is the first of a series of reviews that will examine four seminal James Cagney gangster films: The Public Enemy, Angels With Dirty Faces, The Roaring Twenties, and White Heat. The other reviews will follow over the next few days.]

As part of the trio of films that ushered in the era of the classic gangster film (along with 1930’s Little Caesar and 1932’s Scarface), and also as the film that established James Cagney as the archetypal on-screen gangster, The Public Enemy is a movie that is of significant historical value. For these facts alone it’s worth still being seen today. Fortunately, 78 years after its release, after having the gangster genre explored in The Godfather, Goodfellas and a myriad of other films, The Public Enemy still holds up surprisingly well. It’s still relevant today because in it you can see the origins of many characteristics that would become staples of the gangster and crime films of the future. 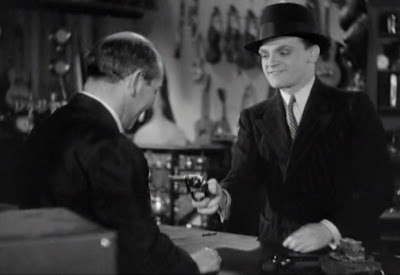 With all due respect to Edward G. Robinson and his role in the previous year’s Little Caesar, it is Jimmy Cagney’s role in this film that set the standard and has endured to the present day. As a rising young gangster in the Chicago underworld, Tom Powers is cunning, ruthless, and possesses unbridled ambition. He is at times joking and lighthearted, as he pals around with longtime partner Matt Doyle (Edward Woods). But he can quickly turn vindictive and sadistic – witness the famous “grapefruit scene” where he shoves a grapefruit into the face of his girlfriend (Mae Clarke) or the grudge he holds against former employer Putty Nose (Murray Kinnell). 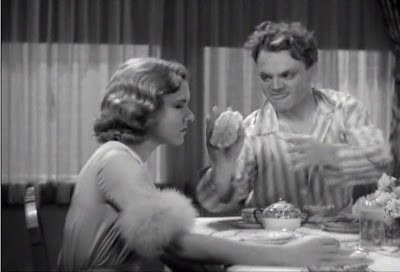 For me, it was impossible to look at the Tom Powers character and not see the prototype for future on-screen hoodlums like Tommy DeVito in Goodfellas. The similarities are undeniable, and Cagney is able to masterfully have his character switch from periods of teasing and playfulness to unbridled rage in a flash. What makes this so impressive is that in many instances a character like this would come off as something of a schizophrenic and completely unbelievable. The beauty of Cagney’s performance is that he makes it feel authentic. He gives Tom Powers enough depth that the audience at times roots for the young hoodlum and at others hopes that he is made to pay dearly. 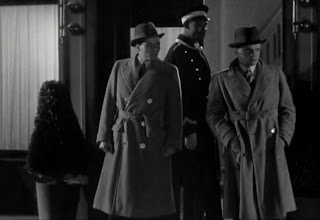 The irony is that according to Hollywood legend, Cagney was not originally supposed to play Tom, but instead to be the sidekick Matt Doyle. Edward Woods was slated as the lead. But soon into shooting, William Wellman decided to swap roles between the two… and the rest, as they say, is history. Woods is very good in his supporting role and it’s hard to imagine anyone other than Cagney as Tom Powers.

So here is the proper time to stand and applaud director William Wellman for making what probably seemed like a minor decision at the time, but that would ultimately have very large implications on the development of the crime drama. Wellman is something of a forgotten man in film history, at least in comparison to many of his heralded contemporaries. His 1927 film Wings was awarded the first ever Academy Award for Best Picture, so he was already well established in Hollywood prior to making The Public Enemy. Later, he would go on to make highly successful films such as 1937’s A Star is Born and the legendary 1943 Western The Ox-Bow Incident. His overall body of work is eclectic, so there isn’t necessarily a definitive film used to identify him. In addition, he was incredibly prolific, directing over 80 films, and the quality is often erratic. While not revered for great technical abilities as a director, there are certain thematic elements that are apparent in Wellman’s best films. His films are honest, sometimes brutally so, and are often characterized as gritty in his depictions of very independent, masculine characters. Bad things happen to people in his films, and without a lot of wizardry or ceremony, he serves as vehicle for the audience to observe.

Aside from the typical gangster rise and fall story, the crux of this film centers on the conflict between Tom and his virtuous brother Mike (Donald Cook). When Tom is drawn toward a world of crime at an early age, his older brother is always nearby to reprimand him and attempt to act as something of a moral conscience. This tactic obviously doesn’t work, as Tom instead continues to rise up the ranks of the underworld. They clash many times, with Tom making fun of Mike working a real job for little money and Mike becoming upset about Tom deceiving their mother. Ma Powers (Beryl Mercer) does her best to keep the peace between her sons, but in most instances she is powerless to do so. The most memorable such episode occurs when Mike returns injured from World War I. The family has a dinner together and Tom brings a keg of beer to celebrate. Mike refuses to drink any, saying that there is more than beer in the keg – that there’s blood and that Tom is a killer himself. As Tom storms out of the house, he turns back toward his brother and declares: “"Your hands ain’t so clean! You killed and liked it! You didn't get them medals for holding hands with the them Germans!" 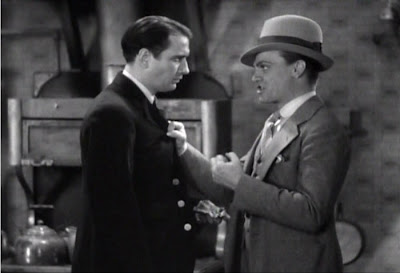 The story borrows liberally from real-life gangland developments in Chicago. Many characters are based on or are composites of hoodlums involved in the bootlegging wars of the Windy City. Gang leader Nails Nathan (Leslie Fenton) is quite clearly based on the real-life Samuel “Nails” Morton, a North Side bootlegger who was killed in the same way as the cinematic Nails – dragged to his death by a horse he was riding after losing control and falling off. Legend has it that members of Morton’s gang sought out the unlucky equine and took their revenge with four slugs. In the film, Tom and Matt do the same to the horse that kills Nails Nathan. Tom’s mentor Paddy Ryan (Robert O’Connor) appears to be a composite of former gang leaders Dean O’Banion and Bugs Moran. Matt is gunned down in the same manner that North Sider Hymie Weiss was killed in 1926.

As someone who follows organized crime and its history at an obsessive level, it’s interesting to see some of these historical details included in the story, but I also think it detracts from the overall experience for me. This probably isn’t the case for others who are not scrutinizing minutia such as this, but for me it at times plays like a mishmash of random 1920s gangland episodes. 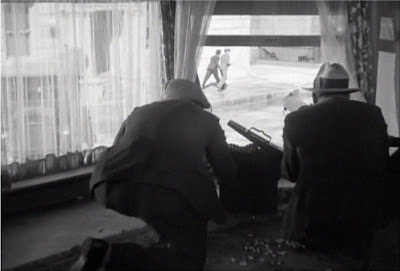 The key weakness of the film for me is the lack of dynamism of the actors outside of Cagney. Even the inclusion of Jean Harlow, playing Cagney’s girlfriend is underwhelming. She enters so far into the film that she has very little impact or on-screen time. Woods is quite good as Cagney’s partner, but outside of that the other gangsters in the film are more like caricatures. Whereas Cagney’s performance still plays as fresh as ever, the Nails Norton and Paddy Ryan characters are very much dated. Mike Powers seems equally out-of-date. It’s possible that this is just an artifact of the times, that this is how actors performed in the 1930s, but I think that’s a bit of a copout. The character of Mike, which is central to the story, isn’t dynamic enough to counter Cagney’s Tom Powers.

In what would become a staple of Cagney gangster film, the finish is stirring. Stumbling down the rain-soaked street after a shootout with rival gangsters, Tom sums himself up in one simple utterance: “I ain’t so tough.”

I’m in no way attempting to proclaim this as Cagney’s greatest performance – he’s far too good in Angels With Dirty Faces, The Roaring Twenties, and White Heat to make that declaration. But this is definitely the film that put Cagney on the cinematic map. It’s worth seeing for his performance alone.