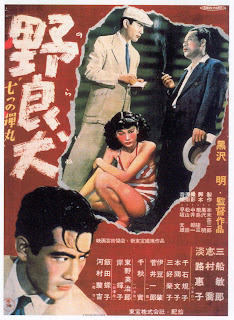 I started out this countdown with two popular films at positions much lower than were probably expected. Particularly in the case of Act of Violence, which many consider to be a preeminent film noir, I knew that the ranking would certainly be disagreed with by many readers. But I’m guessing that this, Akira Kurosawa’s Stray Dog coming in at #79, will probably be the first to elicit complete dismay. Stray Dog, which Kurosawa released in 1949, is generally viewed as being the first film from the Japanese legend that can justifiably be given the label masterpiece. To be certain, it is wonderful filmmaking, and is interesting to watch Kurosawa being so directly-influenced by American cinema of the era. I stop a bit short of calling it a masterpiece, but it does flirt with such a distinction.

Even more important than the potential disagreement with its ranking, the entry of this Japanese-made movie is significant for this entire project. It is the first non-English film to enter the countdown, and shows that my definition of what is and is not film noir is much more expansive than the conventional “1941-1958 made in the United States” category. Its inclusion should be an indication that there are a number of foreign films that can, and most certainly will, find their way into this countdown as it continues. In my opinion, such an expanded definition only serves to make a project like this even more interesting. 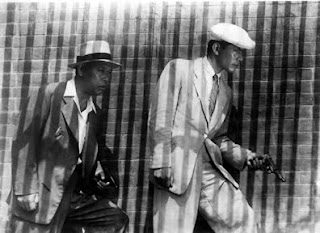 Stray Dog is set in the postwar Tokyo, but if one can ignore the exotic locales and scenery, it plays very much like a Jules Dassin or Anthony Mann police procedural. At times, it almost feels like Kurosawa is following the playbook laid out by such American filmmakers, right down to the western film score. The central story of a rookie cop (Toshiro Mifune) searching for his stolen police-issued Colt pistol is at times annoyingly over-dramatic. As Detective Murakami scrambles to find his lost gun, he begins to learn details of his pistol being used in murders and crimes committed soon after it was stolen. Working with seasoned homicide detective Sato, played spectacularly by Takashi Shimura, the pair chase down leads in search of the weapon. With each new crime attributed to Murakami’s colt, the young officer feels more and more responsible for the carnage. Sato attempts to console, while at the same time helping him recover the gun, and a relationship develops between rookie and veteran.

Despite often being labeled as his first masterpiece, I personally don’t think it’s quite vintage Kurosawa or approaching his best work. Watching it, though, it is obvious that the man directing is completely confident in what he’s doing. What remains most impressive to me is how the pace of the story actually moves quite leisurely, and for the first two-thirds never appears to be in a rush, and yet Kurosawa is able to maintain tension throughout. Kurosawa is also able to portray everything about Tokyo in the late 1940s as incredibly harsh. The heat seams unbearable, as attested to by subtle techniques like Sato’s constant fanning and wiping of his brow. The entire community is obviously still recovering from the destruction of the recently completed war. Like American films that focused on the reentry of soldiers back to civilian life, a similar theme is played out here with returning Japanese soldiers. 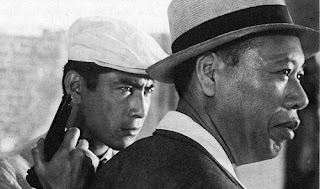 The main, and really only, complaint I have concerning the story is that I have problems feeling much connection to a detective who has his gun lifted by a pickpocket and then is reduced to tears multiple times in the investigation to recover it. Mifune’s acting in these situations is too exaggerated for me, giving key sequences an overly melodramatic tone. I much prefer the controlled, steady performance from Takashi Shimura. Mifune seems to be the one that receives the bulk of the praise in any film he stars in – and in most cases, rightfully so. Here, I think Shimura turns in the most praiseworthy performance.

Stray Dog is, in my opinion, very good but not quite great Kurosawa, showcasing the legend on the cusp of his string of classics. In terms of “greatness,” that term that means different things to different people, this one might rank higher than three quarters of the films placed above it in this countdown. In terms of my own personal preferences, I think this is its ideal ranking. Most importantly for the purposes here, it shows that noir is more than just a fixed period in American cinema. It flourished elsewhere too.
Posted by Dave at 12:05 AM