A Tribute to Thunder 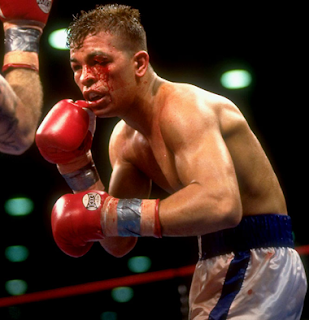 I know that this is a movie blog, but it's the only place where I have the power to post things such as this, so it's going up here anyway. If there's one thing that I like as much or more than movies, it is boxing. I absolutely love the sport. As much as people claim that boxing has fallen on hard times, I still contend that there is no greater experience than a major fight -- be it at home on television or feeling the tension at ringside.

As the string of celebrity deaths continues, boxing today lost the most exciting fighter of the last decade -- Arturo "Thunder" Gatti. While he could at times be an accomplished boxer and technician, Gatti rose to fame due to his legendary action-packed fights. Four times between 1997 and 2003 he was involved in The Ring Magazine Fight of the Year. He won two world titles over the course of his career, one at junior lightweight and the other at junior welterweight.

I'll never forget watching him get up from what looked like a debilitating knockdown in the 9th round of his legendary first fight against Mickey Ward in May 22. My jaw was literally on the floor at the fact that even got up, let alone came back to nearly stop Ward that very same round. His three fights with Ward are among the greatest trilogies in the history of the sport.

At the risk of sounding overly sappy, I just have to say that this death resonates a bit more for me than other recent passings due to the fact that this is a guy that I watched and cheered for. I was a genuine fan, never missing one of his fights. Gatti was (and will continue to be) revered among boxing fans. Rest in peace, Thunder.

The countdown continues as usual on Sunday, but enjoy the highlight video posted above. It is highlights from one of the best fights you will ever see, showcasing the aforementioned 9th round of the first Gatti-Ward fight. I still get goosebumps watching it.
Posted by Dave at 11:01 PM