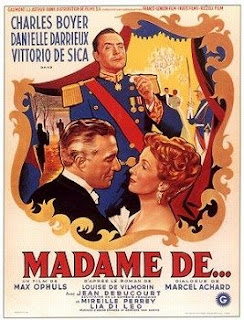 a.k.a.: The Earrings of Madame de…

It is because of situations like this that I have had such a passion for doing this Year’s Best Countdown. In attempting to decide on what my favorite film of each year is, I’ve embarked on movie-watching marathons that have given me the opportunity to take the time to watch overlooked masterpieces and classics that would otherwise remain gaping holes in viewing history. Madame de… has remained near the top of my “to watch list” for some time, but for whatever reason has been continually passed over by other films that have caught my fancy. As I approached the 1950s in this countdown, I realized that I could not make a legitimate selection for 1953 without finally seeing this lauded film and giving it proper consideration.

I watched it for the first time last week and have been kicking myself for waiting so long to see it. It certainly lived up to its reputation. So, for a second straight year, I choose a film set in 19th century Paris as my personal favorite.

It makes me laugh now, but I have to admit that before I finally saw the movie, the English title gave me serious reservations. The Earrings of Madame de… makes the film sound cheesy, as if the earrings in question are used as a kind of cheap gimmick in the film. While the various destinations of the jewelry do factor into the development of the story, they play nowhere near as central a role as a naïve viewer (or some might argue just plain dim-witted!) would believe. They are symbolic, but play nowhere near as direct a role as might be imagined.

The Paris depicted in this film is far different from the one seen in Casque d’or. This is the world of the powerful and affluent – a society populated by generals, diplomats and other notables of French society. The story focuses on the Louise (Danielle Darrieux), the wife of General André de… (Charles Boyer) -- we never find out the last name, hence the title Madame de… After Louise accumulates debts that her usual allowance is insufficient to cover, she decides that she will pawn some of her jewelry to settle her accounts. She decides to sell a set of heart-shaped diamond earrings that her husband had given her. Louise sells them to the very same jeweler who originally sold them to her husband, getting him to promise not to blow the whistle to the General. In order to explain to her husband what happened to the expensive earrings, Louise concocts a ruse about losing them at the opera. Unfortunately for her, an uproar is created to find the earrings. The jeweler, fearing that his role will be discovered, decides to take the earrings back to the General and come clean. The General buys back the jewels, but rather than returning them to his wife, he gives them as a present to his departing mistress. The mistress in turn loses the earrings at a casino in Constantinople. From Constantinople the earrings are bought by an Italian Baron Fabrizio Donati (Vittorio De Sica), a diplomat who travels throughout Europe. The intrigue begins when Donati comes to Paris and falls in love with Louise. When he gives the earrings to Louise as a present, the plot thickens considerably. Louise tries to pretend that she has found her lost earrings, while the General attempts to discover how the jewels made it back to Paris.

This is another instance where typing out the plot makes it sound much more hokey than it actually is. Reading the brief plot summary that I just outlined, the film likely comes across like a second-rate soap opera. Nothing could be more deceiving. Never once does the film cross the line of being too melodramatic to bear. The most striking thing to me about the story was the fact that Louise is able to come across as anything other than a spoiled debutante. At the basest level, this is what she is. Here is a woman who seems to have willingly gone into a loveless marriage in order to benefit from her husband’s wealth and lavish gifts. But even this is not enough for her, as she spends well beyond the ample means provided to her. It is amazing that the viewer is able to feel any sympathy for such a person, but it was impossible for me not to. The viewer is made to understand that even Louise realizes that all of these material gains through the marriage are not enough to make her content. As she begins to see a path toward happiness, it is hard not to root for her to make it there.

The main reason for this reaction is the direction of Max Ophüls, along with the photography of Christian Matras. As someone not very well-versed in the technical aspects of filmmaking, normally such considerations are not as important to me. Great technical wizardry is secondary for me, and no matter how spectacular it can be, it means nothing to me without an engaging story. Essentially it’s icing on the cake – if I’m already engaged in the story, then it's great to see a director doing inventive things with the camera. This is one of the few films where I can say that I actually became equally, if not more, enamored with watching what Ophüls would do with the camera than with the storyline. This is not to say that the story is dull, because it most certainly is not. It’s just that I quickly realized that the camera and the men controlling it are the actual stars of this film, not Darrieux, Boyer or De Sica.

I’ve never seen camera movement this smooth. A lot of times, when I watch a film with an extraordinary amount of camera movement, it feels very clunky to me, or schizophrenic in all of the jumping to and fro. Here, all movements are seamless and seem to be perfectly in sync with what is happening on the screen. For instance, in the virtuoso ballroom dancing scene, in which Louise and the Baron are slowly wooing each other and growing closer as they discuss her husband’s absence, the camera’s graceful movements mimic the dance steps of those in the scene. It is extraordinary and this sequence is the one that most sticks with me from the entire film. Aside from the flawless movement, it is also an ingenious device to pass lengths of time, as one dance is woven into another, allowing the plot to advance and the two lovers to grow closer together in a very short amount of screen time. Yet, the romance never comes across as rushed because elements like this are so well constructed.

Since I’ve been on a roll making confessions in this review, I’ll make another one here – this is the only Max Ophüls film that I have ever seen. After being wowed by this one, I’ll have to set about remedying that very soon.

Rating: 9/10 (ever so close to the perfect score and may still go up after future viewings)

Other Contenders for 1953: There are a lot of great films to choose from in this year and many that were very near being chosen until I finally saw this masterpiece. My guess is that Yasujiro Ozu’s Tokyo Story will see much support in a Countdown like this, but I have to be perfectly honest and admit that I have never been able to get into the film. I can appreciate the reputation and its historical importance, but it’s simply not a film that I enjoy watching. I have this reaction to most Ozu that I see, and maybe this will change at some point in the future, but for right now this one was never even considered by me. As for other films outside of the United States, I think that Henri-Georges Clouzot’s The Wages of Fear is great, and very close to being my favorite film from the Frenchman. It is at times harrowing. Ugetsu Monogatari is another instance of a great film from a certain director, but one that comes just short of being my favorite from him. I think that Kenji Mizoguchi would go on to make a better film, but this one is very close. And finally, Jacques Tati’s Mr. Hulot’s Holiday is different from anything else in this year is always interesting.

My other favorite films of the year come from Hollywood (surprise, surprise). I know that its reputation has declined somewhat over the 60 years or so since it was made, but I still love Fred Zinnemann’s From Here to Eternity. The Montgomery Clift-Frank Sinatra duo is outstanding and I’m always a sucker for anything that Burt Lancaster is in. This was actually the early favorite as my choice for this year – that’s how much I like it. Fritz Lang’s The Big Heat is another classic noir from the man who is arguably the best director in the genre. Glenn Ford’s Dave Bannion character is as coldblooded a good guy as you’ll see in film. Being a lover of westerns, I also have to acknowledge that I am a big fan of the classic Shane from George Stevens. I also have always liked Samuel Fuller's Pickup on South Street, which like the later Kiss Me Deadly manages to successfully combine noir elements with Cold War paranoia. I know many people that found Pickup on South Street too over the top, but it was my favorite Fuller film until I saw The Steel Helmet.

There are a two other films that I have acknowledge having a soft spot for, but that were never truly in contention to be chosen: I Confess (Alfred Hitchcock) and Stalag 17 (Billy Wilder).
Posted by Dave at 6:38 AM