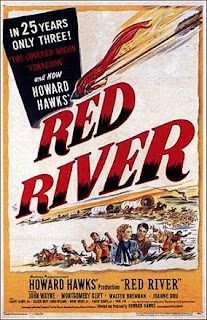 Wow, did I go back and forth on this one. 1948 was a two-horse race for me right from the start and I vacillated between which of the tremendous films I would choose. There are quite clearly more than two worthy films in this year, but for me it was always a contest between the classic Howard Hawks western Red River and the Vittoro De Sica masterpiece Bicycle Thieves. If this countdown were purely an exercise in attempting to decide which film is the “greatest,” I feel quite confident that Bicycle Thieves would be the definite choice. I cannot praise it enough – it is a truly touching film and an amazing experience to realize that such a simple story is so affecting. Just thinking about the film as I type this review makes me want to consider changing my mind yet again. But of the two films, Red River is the one I most often return to. I watch it regularly and feel it is completely accurate to declare it to be the best western of the entire decade.

Over the course of the last few months I’ve slowly begun to come around to the realization that Howard Hawks may very well be my favorite director. The versatility displayed throughout his career is astounding – the man was equally adept with adventures, comedies, dramas, noir, and other types of films. This production was Hawks’ first foray into westerns, and while I will stop short of calling it his best take on the genre, I definitely feel that he hit it out of the park on the first swing. To me, the best westerns are not so much about wild chases and gunfights, but are those that offer fascinating character studies. I find it intriguing to watch flawed men as they attempt to maneuver through tempting or dangerous situations. The reason that Hawks is so successful in his western is that he is able to maintain this crucial element, while at the same time also including well-done action and gunplay. Prior to making this movie, Hawks was already well accomplished in action films (just watch Only Angels Have Wings if you need proof of this), thus it is no surprise that Red River would include thrilling sequences such as a wild cattle stampede or tense showdowns. But these moments of adventure never detract from the central force of the film – the relationship between the determined Tom Dunson (John Wayne) and his adopted son Matt (Montgomery Clift). 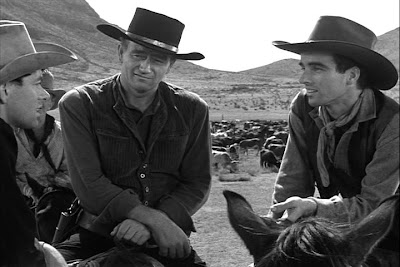 I won’t claim that this is the best role of Wayne’s career, because I don’t think it is, but the apocryphal story of John Ford’s reaction after seeing the film is telling. Referring to Wayne’s performance, Ford is said to have exclaimed, “I didn’t know the big son of a bitch could act!” Aside from being my favorite story of Hollywood lore, it speaks volumes of how good Wayne is as Tom Dunson. Dunson is the pivotal character in the story. The movie opens to Dunson leaving a wagon train bound for California in order to settle on land in Texas. He and his sidekick Groot (Walter Brennan) survive an Indian attack that kills everyone else in the train except a young boy who manages to escape with a single cow. Using the lone bull of Dunson’s and the cow that Matt managed to save, the two form a partnership and set out to establish a cattle empire in the Lone Star state.

The story then fast-forwards 14 years and the cattle ranch is fully up and running. Dunson controls a herd of cattle numbering in the thousands, but is cash poor as the price of beef in Texas is very low. Hearing that better prices are to be found to the north, Dunson decides the best and most lucrative option is to drive the cattle to Missouri. Along with Matt and Groot, Dunson hires more help among veteran cowhands like Buster (Noah Beery Jr.) and Dan Latimer (Harry Carey Jr.) and famous gunmen like Cherry Valance (John Ireland).

The brilliance of Wayne’s performance shines as the group progress deeper into the cattle drive. Through the early stages of the movie and the first half of the drive, Dunson is the usual gallant and heroic character that Wayne is commonly associated with. Here is a man who is caring enough to take in an orphaned boy, making him a partner in the cattle business and willingly raising him to manhood. But the same determination that spurred Dunson to embark on the daunting journey ultimately becomes all-consuming and leads him to emerging obsessed with making it to Missouri. Suddenly, Tom develops tunnel vision and allows nothing to deter he and his cattle from making it there – not complaining by workers, not advice from close confidants like Matt and Groot, and not even the threat of injury to his men. In this transformation into a much darker personality, you can clearly see the roots of a future Wayne character like Ethan Edwards.

When some of the workers on the drive begin to mention that the group would be better served to take the cattle to Abilene, Kansas instead of Missouri, Tom will hear none of it. Rather than put up with what he considers to be insubordination, he instead begins to drive the men even harder. Eventually, with the men nearing downright rebellion, Matt steps in and takes over command of the entire operation. Tom is left behind and sent back toward Texas, but before doing so he makes a bold speech to Matt. In possibly the most coldblooded moment of Wayne’s career, Tom Dunson looks straight into the eyes of his adopted son and declares: “You should have let 'em kill me, 'cause I'm gonna kill you. I'll catch up with ya. I don't know when, but I'll catch up. Every time you turn around, expect to see me, 'cause one time you'll turn around and I'll be there. I'm gonna kill ya, Matt.” No longer the likable character seen at the beginning of the film, Tom Dunson has now become a man hell-bent on nothing but revenge.

The last section of the drive appears to be building toward a final climactic showdown between Dunson and Matt. On the way to Abilene, Matt and his men help out a beleaguered wagon train that is under Indian attack. After driving off the natives, Matt meets Tess Millay (Joanne Dru) and the two begin to fall in love. However, Matt does not stay long, as he and his men are soon back on the trail to Abilene. After Matt leaves, Dunson proves to be right on his heels as he soon catches up to the same wagon train. He too is attracted to Tess, who tries in vain to convince Tom to let Matt live. 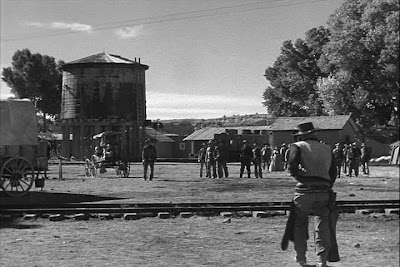 When Tom and Matt finally come face to face in Abilene, the expectation is a deadly showdown between the two fastest guns in the country. Instead, we get what I would argue to be the one weak spot of the film. The buildup to the showdown is hard-charging and relentless – something dramatic and brutal seems the only fitting conclusion based upon what has transpired. Instead, we get an awkward speech from Tess that settles the differences between the two and closes the movie with a forced happy ending. The buildup to the face-off is nearly flawless, so it would be a lie to say that it was not a letdown to witness this conclusion for the first time. Still, I love everything else about the film so much that I’m willing to overlook the misstep. I understand that this could sound like selective assessment, but it how I feel.

Wayne’s performance is not the only one worthy of praise. I have been a huge Montgomery Clift fan from the first time I saw a movie he starred in – that being From Here to Eternity. Even still, I remember being somewhat apprehensive in picturing Clift playing a cowboy. Luckily, my fears were easily discarded. While Red River was the first movie Clift ever made, he is smooth as the calm, confident Matthew Garth. And Walter Brennan is Walter Brennan. By this, I mean he gives yet another example of why I consider him to be the finest character actor of his era. His roles may have been variations of the same character over and over again, but it’s entertaining every time. 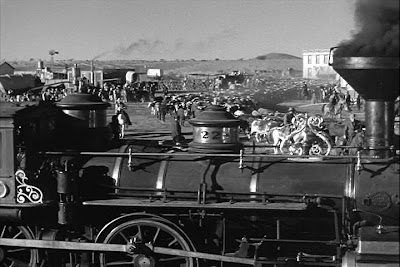 It also needs to be pointed out that the photography makes excellent use of the scenery of a cattle drive. Cinematographer Russell Harlan utilizes the sweeping landscape and we get great shots of the mountains, rivers, and the driving cattle. The photography also blends perfectly with the action sensibilities of Hawks, as witnessed in the filming of the famed stampede scene midway through the trek.

In my opinion, Howard Hawks would actually go on to direct an even better western than this in the next decade. But that in no way detracts from the greatness of this film. It is not a perfect film, as evidence by the fact that I openly admit to not caring for the ending (and evidently, neither did Howard Hawks himself). Even so, I think that taken as a whole that Red River can stand alongside any film ever made.

Other Contenders for 1948: Hopefully my fondness for Bicycle Thieves came through loud and clear in those opening paragraphs, but I’ll reinforce it here. It’s a powerful movie and I would be shocked if someone could sit through it and be completely unmoved. There are two other films from this year that I absolutely love. The first is John Huston’s The Treasure of the Sierra Madre. This is another movie that examines a well-intentioned man’s descent toward madness and Humphrey Bogart is great in the role. The other film comes from Great Britain and is Carol Reed’s The Fallen Idol. While The Third Man is Reed’s most acclaimed movie, The Fallen Idol remains my personal favorite. It contains one of the great child performances I have ever seen from Bobby Henrey and manages to make very common situations feel unbelievably suspenseful.

Other films from this year that I really like but were not really close to dethroning Red River are: Raw Deal (Anthony Mann), The Search (Fred Zinnemann), and Key Largo (John Huston).
Posted by Dave at 9:17 AM