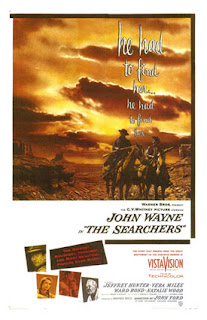 In yet another interesting situation created by the nature of this countdown, 1956 involved some amusing flip-flopping and second guessing on my part before eventually returning to my original selection. When I first started the countdown, I made a preliminary overview-type list, where I outlined each year and made a rough draft of films for each year. Then, the plan was to go back and compare these early choices against other possibilities and “new” films that I was seeing for the first time in certain years. For a few years, however, there were films that I was positive would not be unseated and thus I was able to concentrate on other years where there were films I needed to see or where there were many comparisons to be made. 1956 was a year that I thought was rock solid. I have long regarded The Searchers as John Ford’s greatest film and among the best westerns ever made. Having to keep Bresson’s A Man Escaped out of the countdown was something that I had made my peace with. So, I felt fairly certain that once I approached 1956, I could just go ahead with the choice and move on to the next year.

This is precisely what I started to do. After all, what movie that I had not already seen would be able to supplant The Searchers? I began the early section of a review and proceeded as usual. But in stopping to watch a movie around this time, I decided that I would go ahead and watch another 1956 film. It would at least allow me to say that I was thorough in my deliberations. And so it was that I popped in the DVD of Kon Ichikawa’s The Burmese Harp and proceeded to sit through it and be entirely transfixed. It was a beautiful film, both in its imagery and its story, and I quickly began thinking about how I would begin its entry as the top film of 1956. I even went so far as beginning to jot down thoughts on the movie, before pausing to give The Searchers a chance to reclaim its throne.

Amazingly enough it did, which I suppose is no great surprise to anyone reading this, as they knew from the headline of this post and the movie poster that my selection would be The Searchers. But it truly was an interesting and circuitous route I took to finally arrive at the choice. When I watched it again, for the first time a good while, there are two elements that jumped out at me and made it impossible for me to pick against it – the awe-inspiring visuals in Monument Valley and the career-best performance from The Duke. 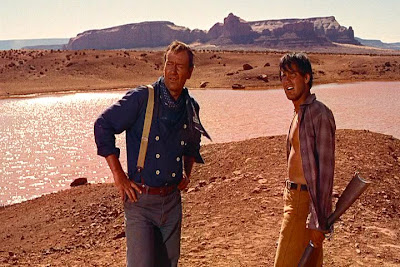 It is John Wayne, of course, who stars as Ethan Edwards, a former Confederate cavalry commander who returns to his Texas home rather than surrender to the victorious Union Army. In Texas he is reunited with his brother Aaron’s family, consisting of his wife Martha and there three children. In addition to his blood relatives, Ethan also learns that a baby he rescued years ago was raised as a part of Aaron’s family, and Martin Pawley (Jeffrey Hunter) is introduced to Ethan as his nephew. Ethan immediately dispels any such notion of kinship when he realizes that Martin is one-eight Native American, immediately showing himself to be a racist of the first-degree.

Soon after being reunited with his family, Ethan is asked to go out with a group of Texas Rangers in order to track a band of marauding Comanches. After traveling some distance, the group quickly recognizes that the attacking of cattle had been a ruse to draw the group away. When they return back to the settlement, Ethan is correct in having declared that it was a murder party, as the entire Edwards property is left in ruins. In surveying the damage, Ethan realizes that his brother, sister-in-law and their son have all been murdered. The two daughters, on the other hand, have been kidnapped. Ethan vows to track them and bring them back, and grudgingly allows Martin to go along with him. Thus, begins a quest that will take the two of them years to complete and have them venturing up mountains, through snow, and across open plains. As the two eventually begin to close in on Chief Scar (Henry Brandon), the man holding Debbie (Natalie Wood) captive, events take on an even more sinister tone. Simply returning Debbie to family and friends no longer appears to be Ethan’s chief objective. This is the plan if Debbie is still “civilized,” which in his eyes means “white.” If she has instead been changed by the Comanches – and read whatever you want into “changed,” be it assimilated, transformed, or even having slept with them – then Ethan has no interest in saving her. In his eyes, she would then be nothing but just another Comanch, and he is committed to seeing that group of people wiped from the face of Texas. Martin’s role then becomes ensuring that he is present when they find Debbie, as he is certain that Ethan would kill her without batting an eye. 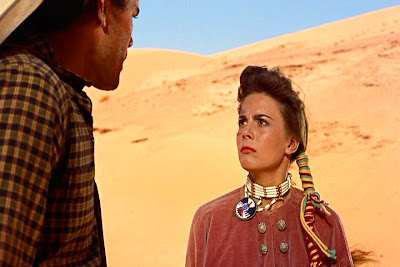 The primary characteristic, and the one that so many viewers seem to get hung up on, is the overt racism displayed by Ethan Edwards. It is no coincidence that he is a returning Confederate soldier. Yes, I’m fully aware that not all Confederate soldiers were raving racists and I’m not making any such claim. But the image serves to strengthen the idea that in Ethan you’re dealing with a man who truly believes in the idea of various races being different and unequal. There is no getting around the fact that he is an outright racist – there is simply no other way to account for his constant belittling of Indians, his references to Marty as “blanket-head,” or his refusal to claim Marty as a relative because he is just 1/8th Cherokee. This is a fact that I’ve actually known to turn many people off from the character and the movie, as they equate having a hero with this worldview as Ford somehow endorsing it. I just feel like such a reading of the character is flawed it two key ways.

First, I think this is simply approaching the character in the wrong way, and expecting it to be played as John Wayne rather than as Ethan Edwards. To expect Ethan to be the typical John Wayne role, the tough guy who is nevertheless the embodiment of American ideals, is just not what the character is meant to be. And in reality, it’s not what is needed to make the story as compelling as it is. Second, and even more important, is that simply labeling Ethan as a racist and nothing more overlooks very intriguing nuances in the character. I’ve admitted the bigoted attitude Ethan possesses, but at the same time he appears to be somebody who harbors at least grudging respect for the Comanches he is tracking. He seems to know more about them than any other settlers in the state – he speaks the language, is familiar with their customs, and never makes the mistake of underestimating them as many of his companions do. In other words, he is not blinded by his prejudice. And, it has to be pointed out, he does not go through the movie completely unchanged. Does he suddenly emerge as a proponent of equal rights? Of course not. But his outlook obviously begin to adjust. While he remains gruff with him throughout the entire film, it is obvious that Ethan grows to be fond of Marty, no matter how many off-color remarks he makes toward him. Just witness his willing of his entire property to Marty if he were to die. It is far from a 180-degree transformation, but Ethan Edwards seen through the doorway at the beginning of the film is different from the Ethan who is framed in the same way at the close. 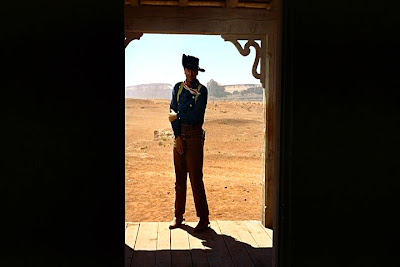 Rather than blather on and try to recreate on paper what John Ford produced so magnificently on screen, I’ll instead include a number of my favorite scenic shots that can be found throughout. The film was shot in Ford’s favorite locale, Monument Valley, and the use of Technicolor and the VistaVision process look like they were created for just such a film. Ford is rightly lauded as being among the best in use of outdoor scenery and the sweeping shots that allow viewers to take in the entire scope of the surroundings. He shot many other beautiful films over the course of his career – The Man Who Shot Liberty Valance, She Wore a Yellow Ribbon, My Darling Clementine – but The Searchers ranks among the most gorgeous films I have ever seen. Here are some of my favorite shots: 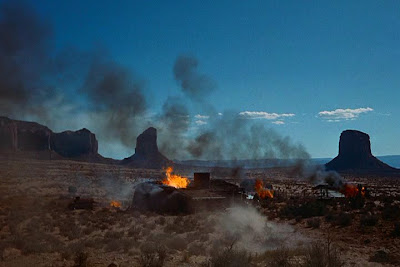 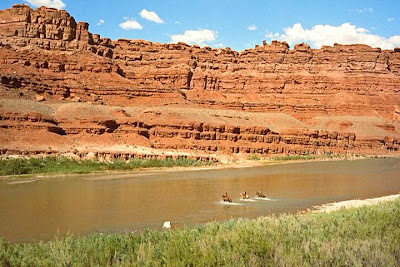 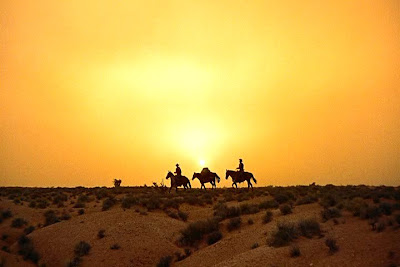 The Searchers is widely regarded as the greatest western ever made. While there are one or two other westerns that I personally prefer, it’s a claim that is incredibly hard to dispute. What I will definitively say is that I don’t think John Ford ever made a finer film or that John Wayne ever turned in a better performance. That one-two combination should be enough to validate its place among the best films of all time.

Other Contenders for 1956: An incredibly top-heavy year in my opinion. As I said, Kon Ichikawa’s The Burmese Harp was a revelation and very nearly stole this slot. Robert Bresson is a director that I sometimes struggle with, but A Man Escaped is undeniably great. I don’t think it is at all hyperbole to declare it to be the best prison break movie ever made. The other film that was in the running this year was the great Stanley Kubrick noir The Killing. Based on his roster of acclaimed films, I know that I will likely be in the extreme minority when I say that The Killing is my favorite film that Kubrick ever made. The film looks great to this day and is intriguing, if not mysterious, the entire way through.

Another western that deserves mention, but never really contended for the top spot, is Budd Boetticher’s Seven Men From Now. While there is another Boetticher-Randolph Scott western that I prefer, this is definitely among the best B-westerns ever made. The final film I’d highlight is one that a lot of people consider 1955, but in staying consistent with my guidelines I’m including in 1956, is Jean-Pierre Melville’s Bob le flambeur. While I don’t consider it to be in the top tier of Melville’s impressive filmography (those films were still to come), it’s a great film nonetheless.
Posted by Dave at 8:57 AM